The opening day of the competition in Lanzarote kicked off to a relaxing start, allowing the sailors to prepare their equipment and focus their minds on the challenges ahead.

Once the formalities of registration and the skippers meeting were completed the trade winds had risen to around 15-20 knots allowing the competitors to hit the water at 2pm.

On sails around 5.3m, the sailors ploughed their way through the opening nineteen heats of the single elimination. The final heat in the second round featuring, Israel’s Yarden Meir vs. four times world champion Jose Estredo and Yegor Popretinskiy vs. Brazil’s Ian Mouro Lemos was run twice but was cancelled due to fading winds. However as the afternoon progressed the wind retreated forcing competition on hold until the riders were ultimately released at 5pm.

The big upset of the day came between Anthony Ruenes and Tonky Frans. The sailors each sailed an exceptional heat, landing all the big moves with faultless precision. Tonky separated the pair with the first back loop of the competition; however Ruenes quickly fought back with a gigantic one-handed shaka, and a no-handed funnel. It came down to a 2-1 decision from the judges and just half a point separating the sailors in favor of Ruenes. 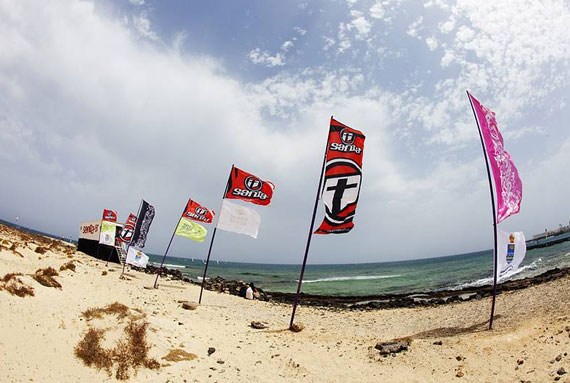 Once again they did it. They try to rob Kiri Thode from his title in Bonaire. They did rob him from his title in Aruba and they doing it again in Lanzarote. It’s very obvious for many that PWA wants an European champion this year. But if it is that what they want, they shouldn’t have the Bonereans nor South Americans compete in these competitions. Just to clarify a few points, in Bonaire: Kiri’s move was written for Steven, while everybody saw it very clearly, the judges didn’t. In Aruba everyone saw it very clearly that Kiri was the winner,… Read more »

….new world order .yeah for sure….. Kiri will have more world titles that you can imagine…. This year we have the most exciting freestyle battle since i dont remember even when. We’ve got 3 guys that can win the title. Steven have won two events, kiri have won 2 events, Gollito i hope will have 2 events (lanazarote already for sure 90%) . If in fuerte wind will be strong Im sure gollito will win also.Eventualy the final answer will be given in Sylt. Im mean come on isnt it exciting battle betwen those guys. All of them have diferent… Read more »