Scale breaking wave rides and colossal jumps put Philip Koster in the top spot in Klitmøller after the double elimination on day 3. He could beat Ricardo Campello twice in the finals. With three event wins under his belt he walks away as the 2011 mens World Wave Champion. 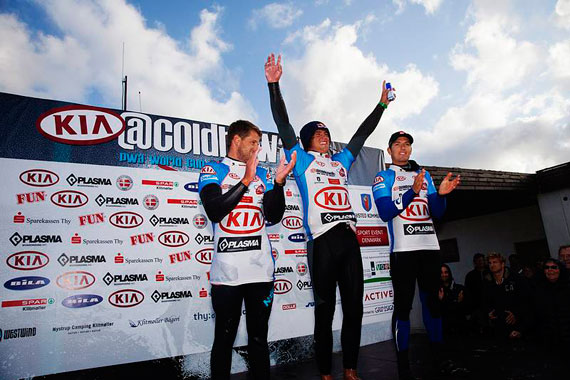 Klitmøller is blessed with a third day of world class wave sailing conditions, allowing the PWA crew to pick up the action where they left off yesterday, and the remaining twelve sailors to fly, spin and slash their way through the double elimination.With the winds still blowing strong and the waves slightly cleaner than yesterday, the judges opted to keep the format the same with two jumps and two rides counting towards the sailor’s scores. The first heat of the day was on at 13.00 p.m. All morning long the jet skis had to be repaired, which suffered on the previous day a lot.

First onto the water was Brit John Skye, against a very on form Kevin Mevissen, who made it through a wildcard into the event and saw definitely a great comebcak. Having battled his way from the bottom of the ranks, Mevissen was eager to continue with his winning streak. Both sailors launched into their finest jumps, matching each other on points and then spent their time working on the waves, in the end it came down to a 3-2 decision from the judges with Kevin Mevissen just taking the advantage for his super-clean Pushloop. 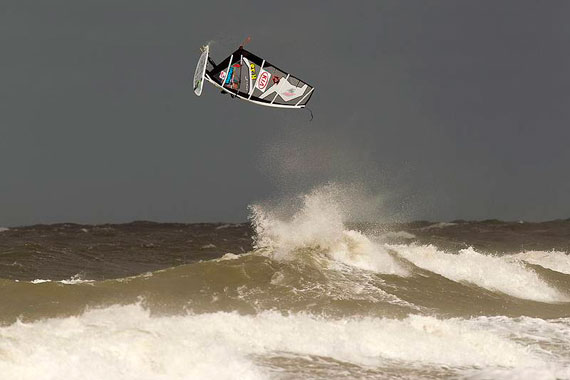 On the other side of the elimination, Dany Bruch went head to head with Ross Williams. Bruch opened the heat with two big airmoves, a Double Forward and a Backloop, whilst Williams opted to focus on waves. The pair continued with this strategy for the whole heat and their scores were fairly similar throughout, until Bruch managed to score an amazing wave in the closing seconds, knocking Williams out of the competition.
The tight heats continued with local boy Kenneth Danielsen, taking on Dario Ojeda. The pair matched each other move for move, but eventually Danielsen’s local knowledge pulled through and he hit the steepest ramp sending him skywards. Danielson’s superb sailing saw him blitz past Mevissen in the following heat and on to face France’s Thomas Traversa. 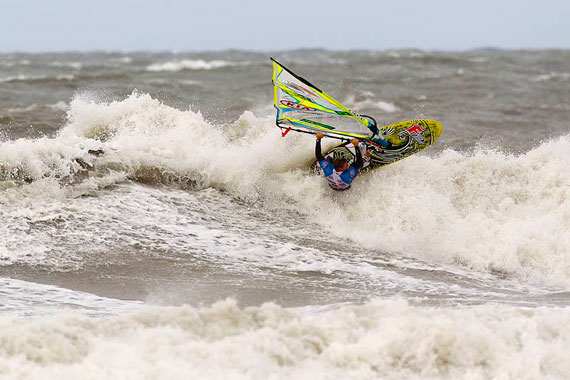 Having taken down Phil Horrocks, Traversa was full of confidence when it came to facing deadly Bruch. The pair matched each other on the jumping front, but Thomas Traversa secured two amazing wave rides by flowing effortlessly from rail to rail, to secure his pass into the next round.
Tremendous Traversa, continued with his war path through the double elimination, bumping his score all the way up to fourth place. Danielson was next to fall victim to Traversa’s frontside aerials and super-tweaked forward loops. Brazilian Kauli Seadi, the last winner at Klitmøller, put up a big fight, by selecting the largest waves in the heat, but Traversa was obviously in his element and enjoying the onshore port tack conditions. 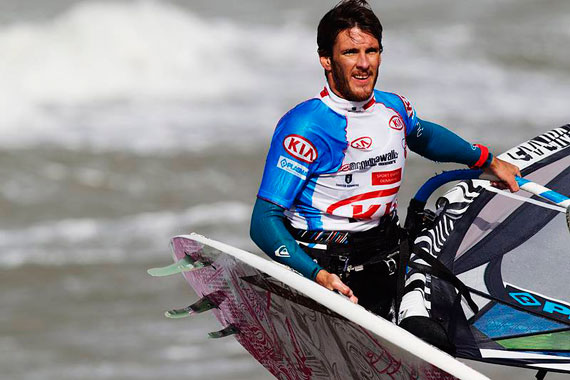 Having sailed four astounding heats, Traversa was still firing with all guns blazing in his heat against Philip Köster, throwing big backside aerials and super aggressive frontside hits, whilst Köster spent the first half of the heat looking slightly underpowered. However in one swift minute Köster stormed into the lead with a perfect bolt upright double forward loop and a humongous Backloop, allowing him to advance onto face the 2010 world champion Victor Fernandez Lopez. 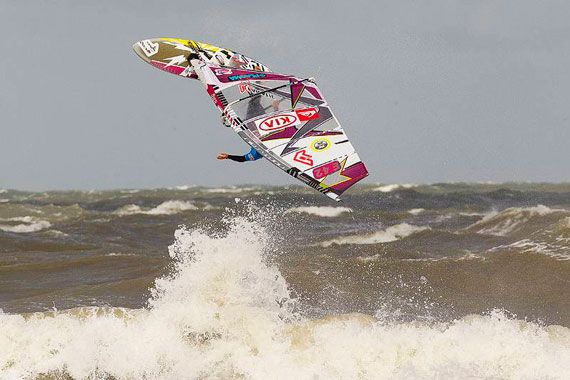 Just one heat separated Köster from the world title, if he defeated Fernandez Lopez he would walk away as the 2011 world champion, and if he lost, Fernandez Lopez would be in with a chance of taking the title. Not one to let the pressure get the better of him Köster, sailed the heat of his life, with a planning double forward loop, a backside 360 and reverse on one wave. Shortly after Köster was announced as the 2011 world champion at the beach, having won the heat with a 5-0 decision from the judges.

The battle wasn’t quite over and Philip still had to face Ricardo Campello for first place. With the adrenaline pumping through his veins the 17 years old German, who lives on Gran Canaria,  wowed the crowds with his scale-braking wave rides where he was awarded twelve points for one ride that included a one handed Goiter and a Taka. Campello tried his hardest to slay the master with his double forward, but there was no stopping the wonder kid. Aware of how the heat had gone, Ricardo Campello made his way back to the beach to prepare for the super-final. 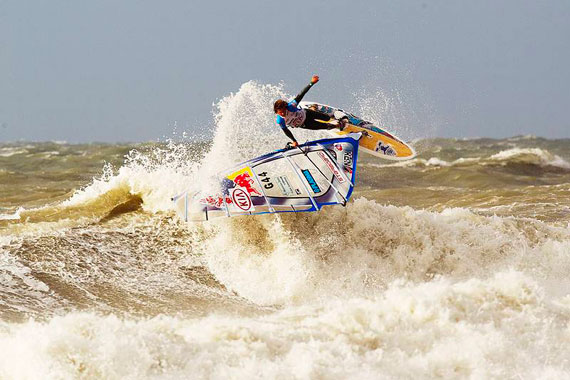 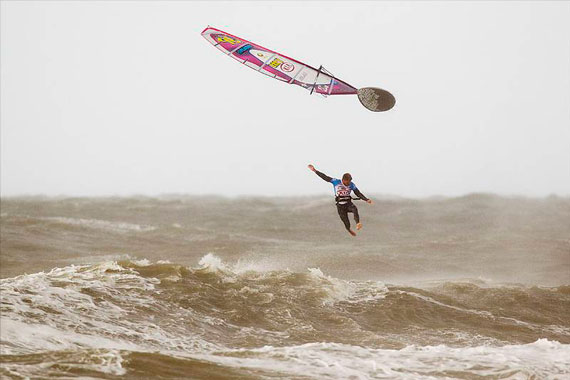 The Super-final
The hard work wasn’t over for the new World Champion Philip Köster. In order to win the event he had to defeat Ricardo Campello for a second time. Obviously enjoying his moment, Köster went on to up his game even higher as he launched into an insane Wave 360, where he landed back in the wave fully planing, and then he boosted straight into a huge Double Forward on the way out. Campello replied with a monster double forward in front of the judges, but Koster was on fire.
Having sailed four mind-blowing heats he was awarded the world title and the event win to the cheers from the crowds on the beach.

Philip Koster stated straight after the victory: “I feel amazing, I can’t believe it, it’s a dream come true. I am so happy I have won another event and now I am the world champion. I can’t imagine a better day, I am so stoked!”

What’s the plan at Klitmøller now?
With the official competition completed and four days still to go there will be plenty of action to keep you entertained, starting with the SURF magazine super-session. The skippers’ meeting will kick off at 1pm with the first possible start at 2pm. Check out the action online live or pass by the event at Klitmøller.