Day two of the KIA Cold Hawaii PWA World Cup 2013 started in the pitch black as the competitors and race crew congregated at the Cold Hawaii club house at 6am. The early start – it was still dark – didn’t pay off as the forecast that promised wind from first light failed to materialize due to the offshore direction. After seven and a half painstaking hours the wind finally followed forecast as it swung cross-off shore allowing the competition to begin shortly afterwards, in perfect, peeling down the line waves – half mast to logo high – and light to medium winds, which saw two waves to count over the duration of eighteen minute heats.

17 year old German Moritz Mauch, who lives on Gran Canaria throughout the year, was on great form and was in favour of the format with two wave rides counting only. He is a rider , who most of the time just rides waves instead of jumping during his free sessions. On day 2 at the PWA Cold Hawaii it completely paid off for Moritz and he won against one of the biggest names in the scene, Dany Bruch. The decision was a very tight one.

“It was a really tight heat,” Duncan Coombs, PWA head judge, said. “Danny felt like he sailed a good heat and had better wave selection, but the young guy Moritz sailed better than him, he was more flowing and his timing was better, it’s as simple as that.” 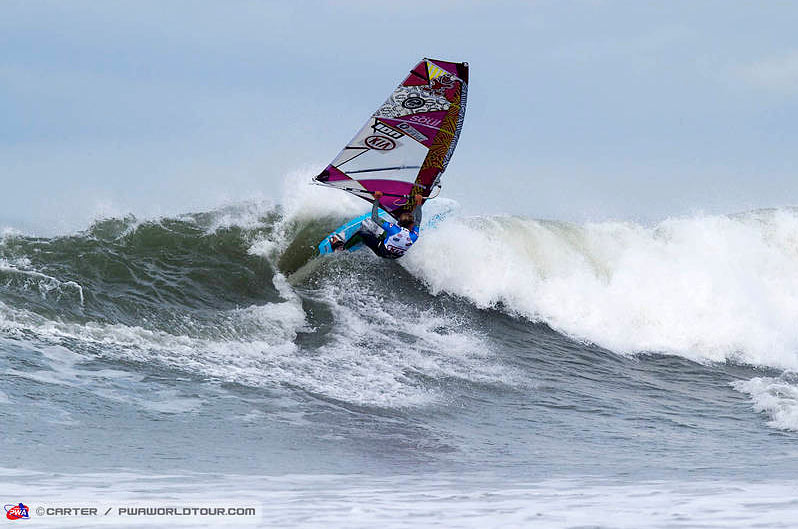 Moritz Mauch likes to surf with the Soul and the NuEvo

“I had a cramps in my arm at the end of last trial and very strong ones in the first heat of the competition but I got two big waves and I’m very very happy. The whole (trial) system was a little bit hectic for me. I had two heats cancelled but at the end it went really well so I’m super happy. From now on it will be even more difficult so if I can continue I will be even more happy if I don’t it’s still good. I came here from Telde, Gran Canaria and I hoped to make it through the trials, but I did not expect this at all. I liked the conditions, there was light wind and good waves from a good direction so it was perfect for me. I didn’t really have strategy just to have fun and catch some good waves and I succeeded in that.” (Moritz Mauch about day 2 at PWA Cold Hawaii 2013) 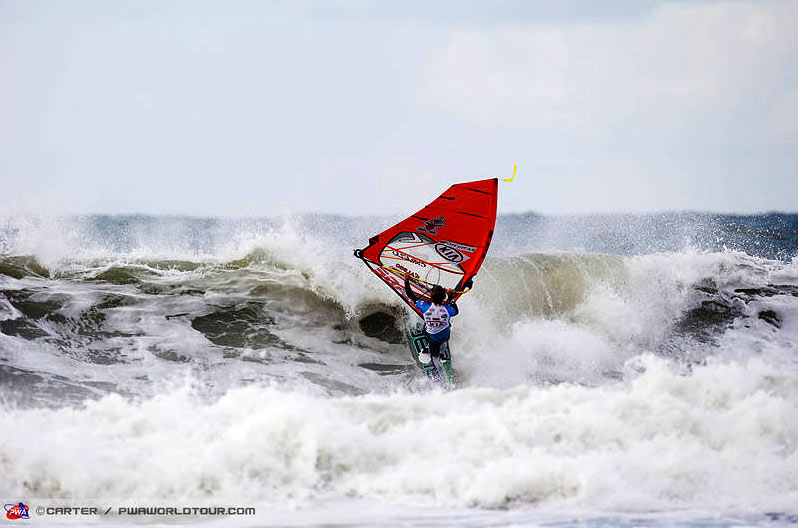 Dany Bruch gave it all riding on the Black Box

The following highlight clip shows how early the riders and race crew had to show up  at the beach on day 2 and how several riders had fun in the surf. Unfortunately there are no shots of the protagonists. Moritz Mauch is not shown in one single scene. For all of you, who are interested in his style, click on following link: Moritz Mauch Action Clip.

The second heat of the day got cancelled, but it was as well a very tight battle in between Antoine Martin and John Skye and Victor Fernandez and Lars Gobisch. Gobisch and Martin were leading  and heat 2 could have seen upsets, too.

The wind- and waveforecast is not looking too good for the next days, but some wind and waves are expected to show up during the weekend.