A new year, and an entirely new event stands poised to mark the start of 2011 PWA World Tour. With the winter training period finally coming to an end, it’s time to start stoking the boilers in preparation for the 2011 PWA World Tour to rumble into action for the start of the new competition year. The 2011 season opens its doors with the entirely new competition location of Mui Ne, in south eastern Vietnam.

The PWA will be stationed in Mui Ne for a period of nine days, from February 25th to March 5th. First to hit the water will be the men’s freestyle fleet, who will compete until midway through day five, on March 1st. This midway point in the competition will also double as the registration day for the men’s and women’s slalom fleets, and potentially provide the opportunity for the racers to notch up the first races of their allocated four and a half day race period. 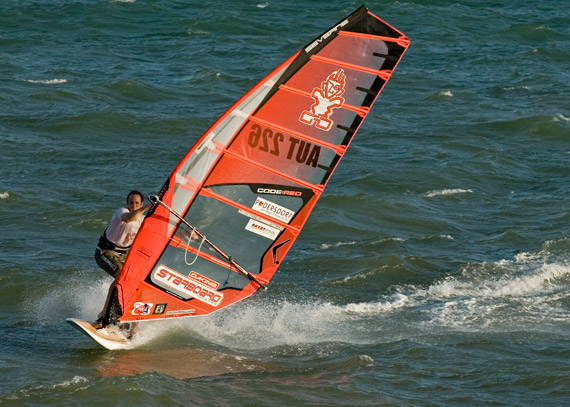 Being an entirely new tour stop, we thought we’d enlist one of the PWA’s most notorious globe trotters, and Mui Ne regular, Chris Pressler (Starboard / Severne) to give us the insiders eye view on what to expect for the coming nine days of competition.

CP: “The conditions can range from 7 knots and relatively flat water, up to 35 knots and choppy conditions, much like Pozo. The wind, which normally blows from a northeasterly direction (cross onshore) generally kicks in by morning, building to a steady force 4 by midday, then turning side shore and typically building to upwards of a force 5. In the late afternoon the wind tends to swing more offshore and gets very gusty on the inside. The ideal situation would be to run the heats from 12.00 to 16.00. If the wind blows for several days a heavy shore break can crash on the very narrow sandy beach.

In general it’s relatively difficult to slide through freestyle tricks, but the conditions are well suited to powerful air moves. In slalom we can expect exciting races with jibe marks right next to the shore and the finish line almost on the beach.

The atmosphere in Vietnam is great. Bars and restaurants are next to the beach, where you can find shade under the palm trees. The prices are low and you can discover a new culture there.

I’ve visited Vietnam eight times and each time I had nice conditions, using sails from 6.1m to 8.1m in slalom and freeriding and 4.2m up to 5.9m in freestyle.”

Check out the video from the Vietnam Fun Cup last year