The first day of the PWA Grand Slam in Vietnam is over and Kiri Thode is the winner of the first Single Elimination. With much improved jumping and airtime Kiri could beat Gollito Estredo in a very close final. Read the more detailed report of the PWA press officer Andrew Buchanan. 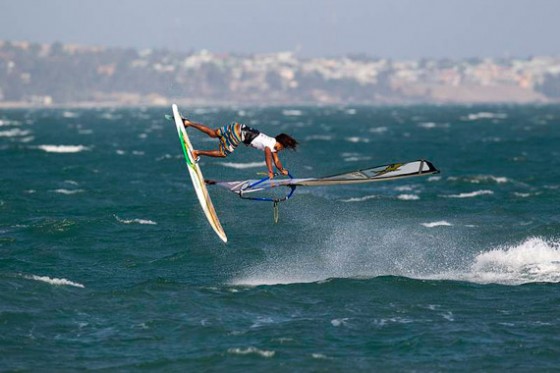 With expectations running high regarding Mui Ne’s potential as a competition freestyle location, the event’s opening day was anything but a let down. Blue skies, warm water, stunt ramps and 20 – 25 knots of the finest Vietnamese thermal wind, and the stage was set for Asia’s first ever PWA freestyle Grand Slam in the men´s category.
Most of the freestyle fleet made the call to get to Vietnam a few days ahead of the competition so they had a chance to get a feel for the conditions, but from the outset of the first single elimination it became obvious that Mui Ne was going to take a bit of getting used to. The location is fairly unique in that the beach shelves at such a steep angle, the shore break actually back washes into the open sea producing a double-up effect for several hundred meters out into the competition area.
On the way out many of the sailors were putting the double-up to good use to launch into pushloops and backloops, but on the way in, when you’d typically expect to see multiple rotation sliding moves, it made it near impossible to find a suitable launch zone. As a result, the majority of the fleet quickly adapted there routines to focus heavily on high magnitude, aerial moves as a preference to the sliding stable of moves.

Following the 1.00pm skippers’ meeting, it was decided that the 22-man fleet would compete, man on man, in 7-minute heats. Each tack had a cap of 7 moves put on it, of which the four highest scoring moves (from each tack) would be counted towards their final score.
First scalp of the day went to Belgium’s Dieter Van Der Eyken (Severne / Starboard), who took down the usually stellar French freestyler Nicolas Akgazciyan (Starboard / Gun) to make the third round for his first time in a PWA competition. Unfortunately for him, his subsequent pairing against Bonaire’s Taty Frans (Starboard / MauiSails/ Mystic) in the semi finals proved a task too big, but Van Der Eyken had already proved himself a worthy adversary amongst the PWA’s elite.
Firmly stopping any additional advance from the Belgium contingent, Tonky Frans (Tabou / Gaastra) took it upon himself to hand Steven Van Broeckhoven (F2 / Gaastra) an early departure with the aid of both a back loop and a pushloop off the afternoon’s building ramps.
Also advancing in the quarterfinals were Jose Estredo (Fanatic / North), who defeated Davy Scheffers (Tabou / Gaastra) with a defiant aerial display, and Kiri Thode (Starboard / Gaastra) who progressed into the semi finals ahead of Canadian Philip Soltysiak (Starboard / Dakine).

This meant that Thode and Taty Frans, and Estredo and Tonky Frans would face off to decide who would make the final. With ramps aplenty and no shortage of wind to work with, the four went to town, nailing air chachoos, pushloops, one handed backloops and a selection of super-tech aerial rotations. On the final horn it was Estredo and Thode who were rewarded for their more diverse and cleanly stuck moves, leaving the Frans brothers to fight it out for third in the losers final.
Frans showdowns are always entertaining, the pair show no mercy and are always guaranteed to go for make-or-break moves that the majority of other competitors wouldn’t consider. This loser’s final was no exception, with the pair letting loose their full arsenals on each other. Hats off to Tonky Frans, who was relentlessly nailing pushloops and backloops, but third position was eventually awarded to Taty, for his choice of technical, smoothly executed freestyle sliding moves on the inside, and explosive aerial moves on the way out.

We’ve seen Estredo vs. Thode finals many times before, but Vietnam’s new and unique set of variables made this one utterly unpredictable. Both sailors were firing on all cylinders en route to the final, perhaps Thode more so than Estredo, but Estredo’s a big game player and thrives on the pressure of finals.
Thode and Estredo were churning out multiple combinations with machine like precision. In the end, Thode was awarded the victory. Both score sheets looked very similar, but Estredo was defeated by Thode’s consistently greater magnitude, and a sustained period off the plane in a lull, which cost him dearly. 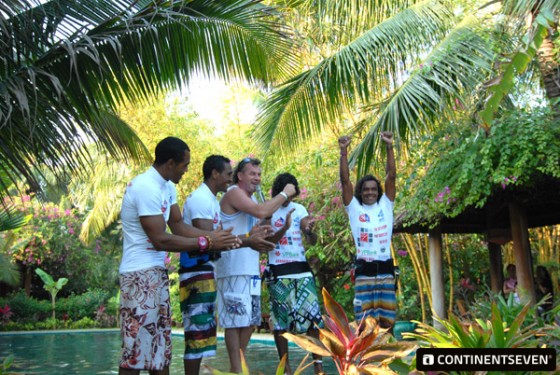 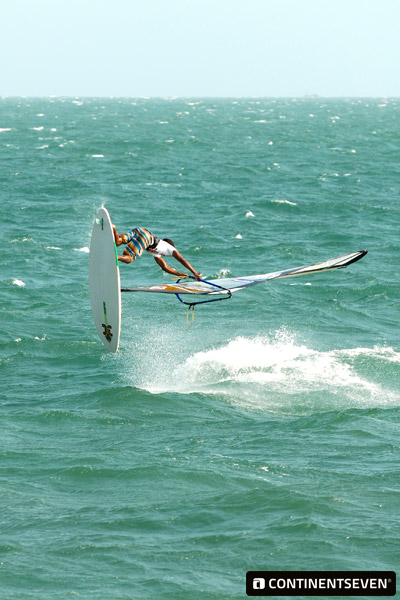 @antonie yes, i would like to see this heat too !

It’s possible to put online the Gollito and Kiri’s final please? 😀 Like on fuerte in 2010.

well deserved for kiri!!! SIck ripping…
You can follow the live-streamer on the pwa website.. but there is a big time difference with europe!!!the level is superclose.. the conditions are super hard and for everybody is diffecult… the full fleet is ripping and making the same moves.. if you have a bad heat.. you loose..!!
Tommorow double…