The PWA continued the double elimination here at Pozo Izquierdo at 08:30 in the morning. The wind was up, blowing with 35 knots and the riders ready for the battle. 12 heats in the men and 8 in the ladies elimination could be finished until 13.00, when the waves disappeared totally. The reason was the high tide. After a one and a half hour long break the red flag went up again, a bit after 14:30. Philip Köster was on fire, eliminated Ricardo Campello and went into the final against single elimination winner Victor Fernadez. The Moreno Twins also battled it out. 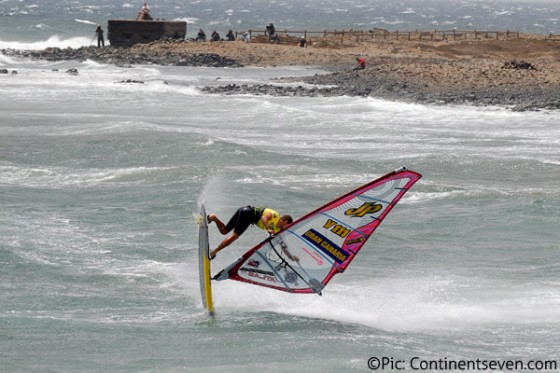 In the men´s fleet Ricardo Campello saw an incredible comeback through the double elimination. He kicked out Jonas Ceballos, Dany Bruch, his teammate Robby Swift, who sailed very impressive as well, Marcilio Browne, who had amazing waverides but missed apparently some points on the jumping and Ricardo as well kicked out Dario Ojeda.
Ricardo Campello impressed with super clean Double Loops, massive one footed Forwards and Backloops up in the third floor. But also on the waveriding side he scored well, landing high Wave 360ties.
Perhaps he had the right warm up programm this morning, when sailing a fresh set of gear out to his teammate Robby Swift, who crashed a mast when landing a massive Backloop. Ricardo took his clothes off and sailed out without harness. He saved Swifties advancing to the next round. Robby Swift made it later in 6th position at the this years event.
Kauli Seadi, one of the favourites lost against a super strong sailing Marcos Perez, who finished the event in 7th position together with Dany Bruch.

Marcilio Browne lost one position in the ranking , as well Dario Ojeda, but both executed very difficult moves in their heats. Brownzinho nailed perfect Backside Wave 360ties close to the shore and Dario impressed with a really high Backloop plus a perfect Wave 360 nearby the bunker.

In the ladies fleet we saw a strong sailing Steffi Wahl, who proofed that the spots in Denmark and northern Germany are quite good to prepare for Pozo. She could kick out Junko Nagoshi, but lost in the heat for the top 4 against Nayra Alonso very close and made it overall in 5th position! Well done! “I am happy with my result. I only had 10 days with wind this spring,” Steffi stated at the beach.

Local Nayra Alonso lost against Karin Jaggi, who landed extremely high Pushloops and got a lot of points in the jumping category. For the entrance to the final Jaggi fought really hard against Iballa Moreno, who nailed an extremely high clean Backloop on the outside plus a sweet Forward. Karin had the better wave selection, but lost in the end to the save jumping of Iballa.

The heat between Ricardo Campello and Philip Köster got cancelled at 13.00 because of the bad conditions in terms of waves. It got already started – Philip Köster dominated the heat landing a Backside 360, which he directly connected with a waveride, tweaked backside airs and a perfect Wave 360 in just several minutes. 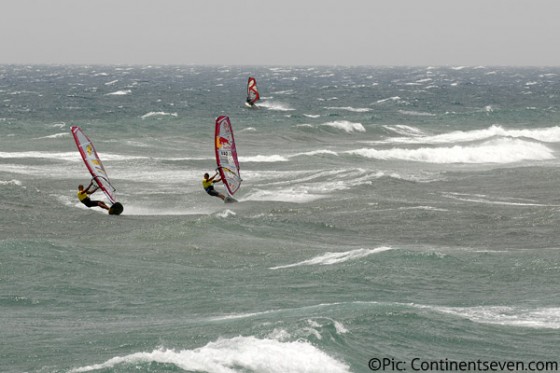 Köster vs. Campello got cancelled due to the small waves - Pic: Continentseven.com

At 14.33 the red flag went up again for the heat in between Ricardo and Philip. It was the sixth heat of Ricardo already and he tried to give the best, but crashed some landings. Nevertheless he scored high in riding and jumping. But Philip opened a firework of airmoves like Double Forward, fully planned Backloop, wWve 360, double Taka. Perhaps it was the best heat of Philip in the whole competition. Ricardo had an amazing waveride, but perhaps was a bit tired of sailing 5 heats in the morning, landing more than 10 doubles and so many other jumps plus having the swimming session with the broken gear! This was a great show, Ricardo!

Directly afterwards the ladies final got started. Daida Moreno was on 3,7 m and Iballa Moreno decide to choose the 3,3. “Perhaps it would have been smarter to take the bigger one as well“, Iballa commented her heat after loosing against her twinsister, who had a bit more airtime. Daida just was on fire. With massive Backside airs on the way in, a very much stalled Forward and massive Backloops she scored big. Iballa sailed very solid, had a good waveselection and also very nice airrotations, but missed a bit of extra power. 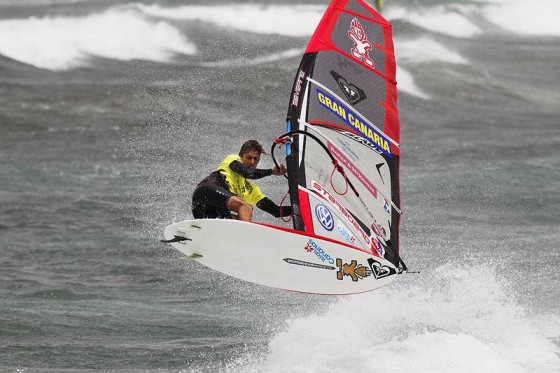 We saw a big final in good conditions anyway by two ladies, who improve their skills year by year at Pozo Izquierdo!! Soon we will see Takas and Backside Wave 360ties. Congratulation to Daida Moreno winning the event!

A bit after 15.00 the final was up: Philip Köster had to win the first heat against Victor Fernandez to have a chance to win the event. And he did. In a 3:2 decision the 16 year old local from Vargas beach could sail in the 1:1. Motst of the people on the beach thought Victor would have won. But Philip had a high difficulty in several moves, which brought him a bit more points. Victor had amazing waveriding, but it was not enough! Most of the fans already walked to the windsurf center in expectation of having the pricegiving. But Victor and Philip had to sail another final. 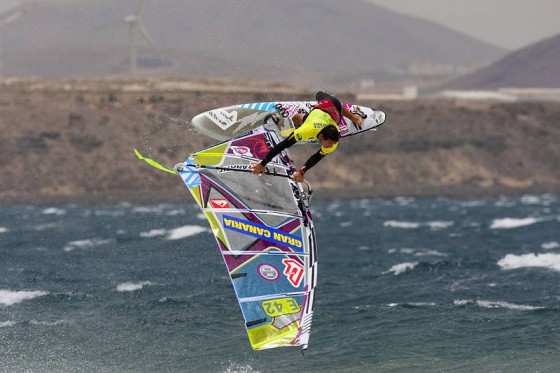 Köster landed a perfect Double forward at the beginning, but after an extremely hard landing his boom slipped far down and made him all the heat long troubles until he changed to another set of equipment. Victor soon replied with a Double forward rotation as well. And he milked the waves with Takas and Goiters. Philip nailed another Double forward and a massive stalled Forward. Victor scored high with a tweaked Pushloop and his waveriding. In the end it was a 5:0 decision for Victor, who took the crown back to Almeria. Big congratulations to both sailors, who put a great show in not perfect conditions. The sailors proofed that waveriding has improved a lot and competition can take place when the surf is not very big.

Plus so many moves were executed in perfection! Brilliant control and perfect landings.

Overall the event was a big success, although the  forecast was so bad. Headjudge Duncan Coombs and the judging crew did an amazing job and the sailors pushed the discipline waveriding at Pozo Izquierdo to another level. See you in Pozo next year, hopefully! 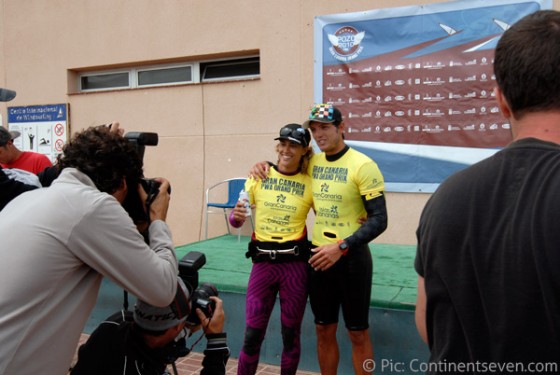 “The sailors proofed that waveriding has improved a lot and competition can take place when the surf is not very big.”

Yeah, but this is not what I want see personally. It’s just great for having big price money, not great for our sport.