Around 9:30 the day started with the first heats in the men single elimination. The wind was definitely on at day 3 and picked up to 35 knots at the strong periods. The ladies sailed on sailsizes from 3,3 to 4,0 and men from 3,7 up to 5,0. Overall it was a monster day. 37 heats got finished. After the single elimination the PWA crew decided to go into the double straight. 12 heats could be finished already. 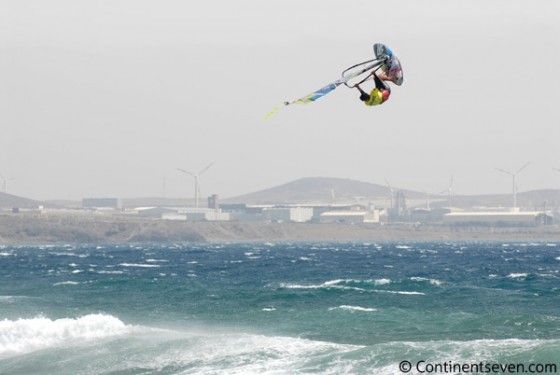 We saw an extremely exciting single of the first 2010 PWA waveevent. The top 32 sailors were left after having 8 heats sailed on day 2 already. In the first round of day 3 most of the top names made it through, but one of the biggest names in the wave circus failed: Kauli Seadi lost against an extremely strong sailing Ben Proffitt from England, who impressed with very clean and technically difficult waveriding. In round 3, the top 16 fought for points, saw local Marcos Perez defeating Klaas Voget, who finished in second position in the last event on Sylt. Philip Köster sent Ben Proffit in a close heat back home to the beach. He nailed an extremely high stalled double forward, which saved him staying in the competition. Proffitt sticked nice fast backside wave 360ties and a Taka on one wave. Just impressive! But Köster was a bit stronger landing as well backside wave 360ties, Takas and house high airrotations and made it into the top 8. Marcos Perez was the next Köster took down. He sailed probably one of his best heats. Dario Ojeda, who was beating Jonas Ceballos also took the victory against Spaniard Alex Mussolini, the winner of Sylt 2009. Marcilio Browne fought down Ricardo Campello. The Brasilian had improved extremely much in port tack conditions landing double forwards and nailed extremly nice backside wave 360ty. The training before the event paid definitely off. Dany Bruch, who had a hard time finding proper ramps, lost against Victor Fernandez. But Bruch performed excellent, landing for sure the best wave 360ties. 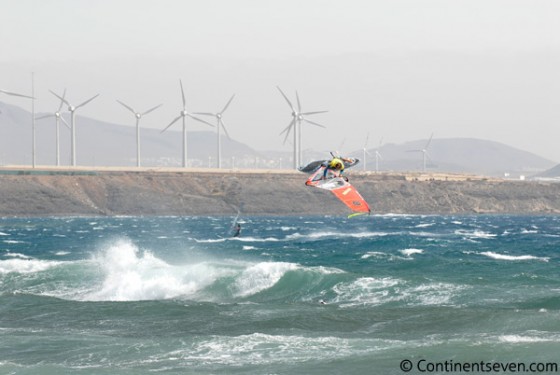 Philip Köster against Dario Ojeda and Marcilio Bronw against Victor Fernandez were the heats of the top 4. Köster and Fernandez, the 2009 Pozo wave finalists, presented their whole repertoire and proofed that they both are on a bit higher sailing level compared to the rest of the sailors. So they met in the 2010 final of the first single elimation as well: Victor nailed a perfect double forward almost at the beginning and set a standard. The waves were small, but Philip answered with an extremely high backloop. The fight went on in the waveriding. Both crashed some times, but Victor looked a bit more confident in the extremely difficult conditions. The longer the final heat was on, the stronger Philip got. He nailed a double forward as well plus a stalled double forward. Then it was up to the judges. 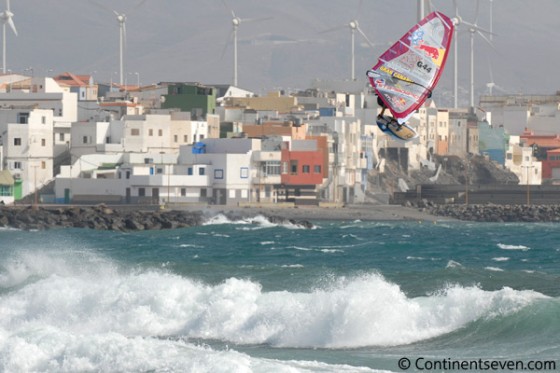 The winner got announced in the Centro del Windurf, which is located just next to the eventsite. This time Victor took the first position winning in a 3:2 decision. It was definitely very close. Congratulations to both for the great show! In third position local Dario Ojeda followed, who fought down Brasilian Marcilio “Brownzinho” Browne. The Four Dimensions connection made it with two riders in the top 4 of the single.

In the ladies fleet the Moreno Twins dominated. Iballa and Daida executed extremely nice back- and forward loops plus tweaked pushloops in variations. It looks like they both arise their level year by year. Just very impressive, how they set a new standrad year by year. Daida took the victory in the end. Karin Jaggi, who sailed a solid competition followed in 3rd position and in 4th local Nayra Alonso. Congratulations to the winners. Daida stated: “It was not my best final. I was on 4,0 instead of 3,7 like in the heats before and struggled a bit landing my airmoves very clean.”

The tide was low and the waves also shrinking, but still there were good ramps. In the double we saw a comeback of Kauli Seadi, who eliminated young talented local Moritz Mauch and Hawaiian´s most universal sailor, Kai Lenny, who improved so much from 2009 to 2010 here at Pozo. Quite in form was Slalom machine Antoine Albeau and Lanzarote local and freestyle expert Antxon Oetagui, who went two times through. Young Aleix Sanllehy also convinced a lot, as well great heats had Kenneth Danielsen from Denmark. Gollito Estredo, who got a brandnew quadfin Fanatic this afternoon – his boss Craig Gertenbach wants him winning in waves as well obviously – convinced with brilliant wave sailing and made it throug his heats twice. Young Jules Denel, who is an overal talented sailor, scores great on the Slalom course already advanced twice, against Phil Horrocks and Jamie Hancock. After 12 heats with a a result, the heat duration was 8 minutes each, the double elimination got stopped. 14 or 15 heats are missing in the men double plus 9 or 10 heats in the ladies fleet.

Preview on the final eventday

Tomorrow morning the skippersmeeting is scheduled for 8.00 and the first possible start could be at 8:30. Ben Proffitt against Jules Denel and Klaas Voget against Gollito Estredo will be the first heat of the final day. It will be an exciting final and for sure many people are interested, if Philip Köster will fight back and claim the top of the podium her in Pozo! 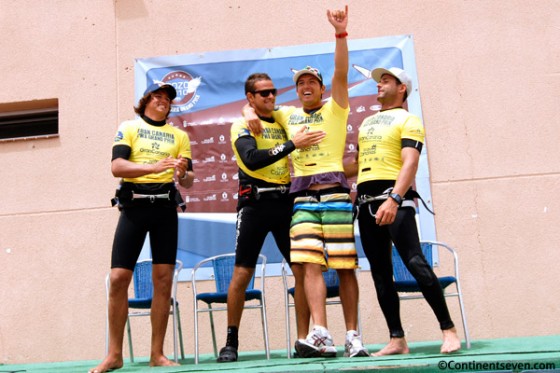 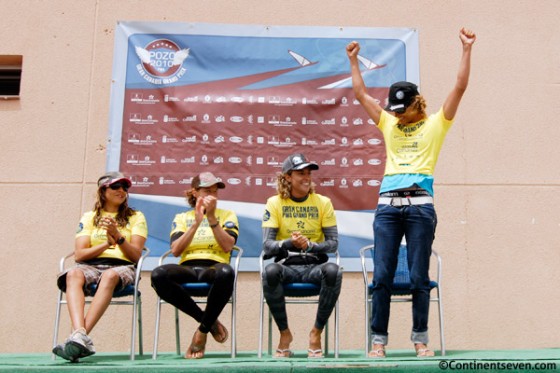