Today the bay of Pozo looked much different than yesterday. The clouds were gone, it was sunny again and the first 8 heats of the men´s elimination got already sailed. Many locals made it through in the top 32:

Alessio Stillrich, who improved a lot within one year, or Eleazar Alonso, who could defeat Freestyle worldchampion Gollito Estredo. Marcos Perez, halflocal  Aleix Sanllehy, Jose Romero, Omar Sanchez, Josep Pons Casanovas, and Francisco Casas Garcia, who is from Almeria, the homespot of Victor Fernandez, who sails a lot with him and obviously tought him some tricks how to sail a heat correctly. 8 sailors, who advanced, are locals or part time locals. The other 8 sailors, who made it in the top 32, were quite prominent names: Ben Proffit, who will face Kauli Seadi in the second round. “That´s better than the other one, which would be Philip Köster”, Ben told us.

Further names were multi watersport freak Kai Lenny from Hawaii, who gets used better and better to the Pozo conditions. Antoine Albeau made it through as well. Also Graham Ezzy. An extremely strong sailing Jaeger Stone, who just recovered from a foot injury, could defeat Boujmaa Guilloul. Kenneth Danielsen eliminated Lanzarote local Antxon Oetagui. Tonky Frans sailed on his big freestyle board and had no chance against Francisco Casas Garcia, especially in terms of waveriding. Phil Horrocks, IFCA Wave worldchampion 2009, sent young Moritz Mauch back to the beach and Kevin Mevissen, who is back on the PWA tour were a bit too strong for the globetrotter Leon Jamaer. 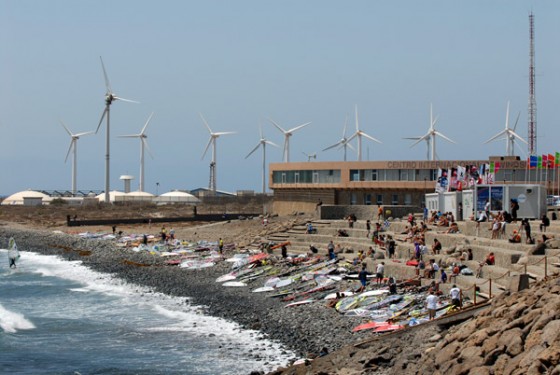 Equipment on the beach - Pic: Continentseven.com

The heats 1 to 4 were sailed in 15 min sequences. Heat 5 with Sanllehy, Scotto, Ezzy and Jung got cancelled several times. So headjudge Duncan Coombs decided to raise the heat duration to 18 minutes. Best two jumps and two waverides did count. 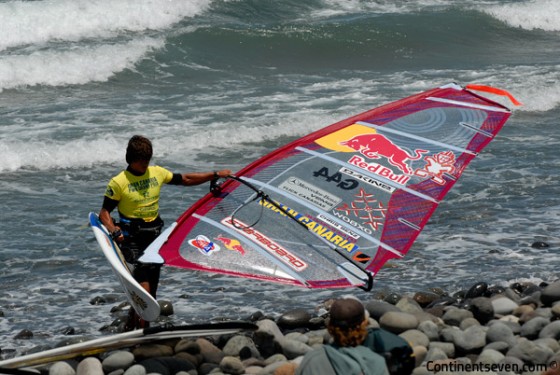 The condition stabilized and sometimes one bigger set showed up in the bay of Pozo Izquierdo. The PWA crew also started heat 9 with last years winner Philip Köster against Kai Lenny and Kauli Seadi against Ben Proffit. Philip, who was on form and already his first tweakedPpushloop on the way in while the warmup this morning, collected a lot of points in less minutes on the judge sheet. But the heat got cancelled.

Suddenly the waves totally disappeared. No more heats got started while the afternoon anymore. Tomorrow´s skippersmeeting will be at 9.00 with a first possible start at 9:30. The forecast looks ok and just 17 heats are missing to get the final.

You can follow the elimination ladder of the men here. 8 heats more of the men and then it is the turn of the ladies.