After 8 days of competition, Pozo Izquierdo finally bounced fully into life on the final day of the 2022 Gran Canaria PWA Windsurfing World Cup as Pozo strength winds and fun stunt ramps let the best sailors in the world truly demonstrate what they are capable of with an entire day of pulsating action, which saw the Men’s and Women’s Double Eliminations completed.

Daida Moreno is well known for her fighting qualities having won the biggest fight of her life against cancer over 10 years ago. The 18-time world champion, who is now a full-time physio, drew upon all of those qualities today to fight back and claim another fantastic victory here as she extends her incredible run in Pozo, which has seen her win all but one event here since 1998. Daida produced the moment of the day in Heat 34 against – Sarah-Quita Offringa – as she landed an amazing frontside air 360 to earn 8.25 points, whilst she later landed the biggest jump of the entire contest with a huge 6m stalled forward to win the Red Bull Rockets contest, whilst also setting up another all Moreno Twins final. 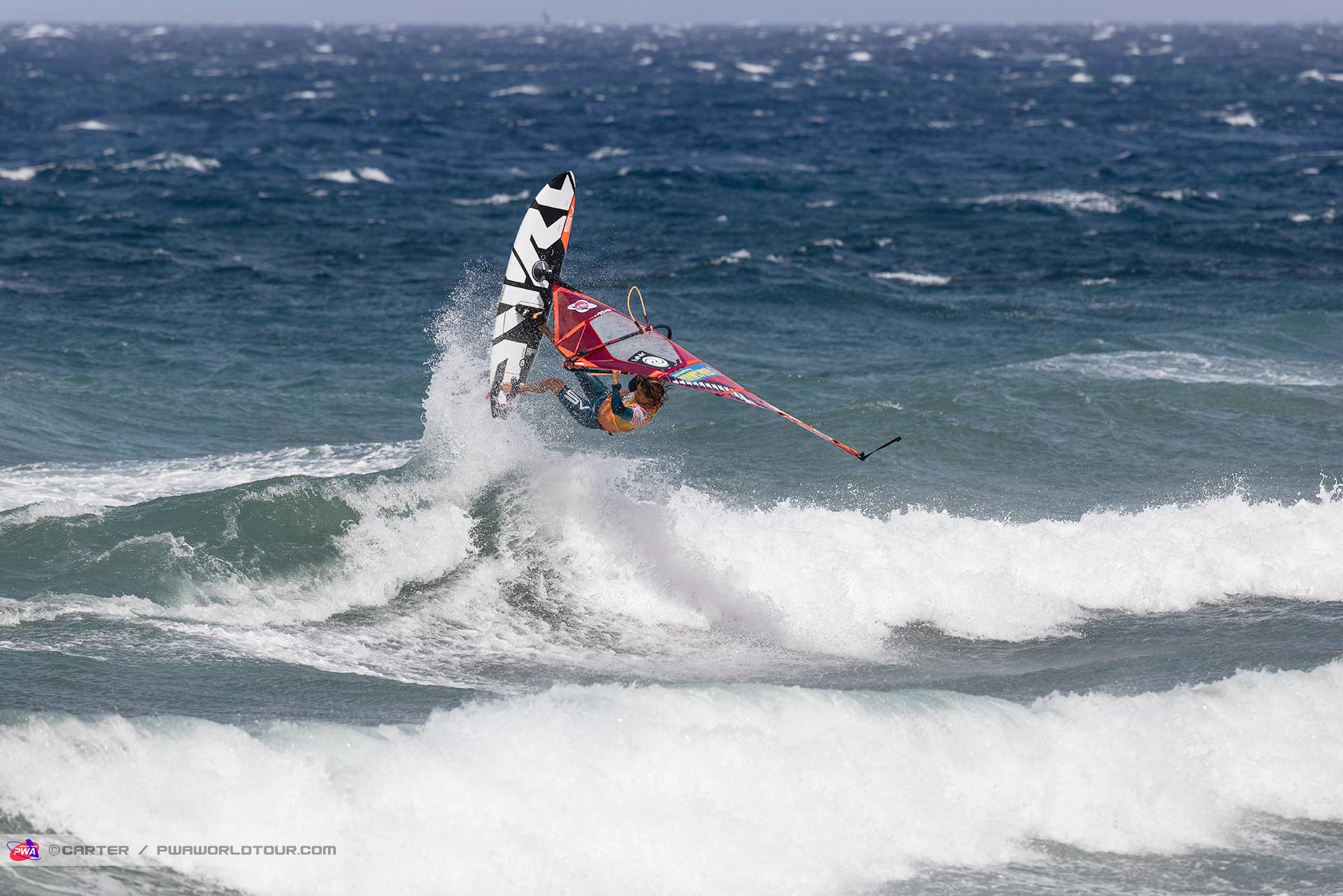 Daida was able to come out on top in the final to force a Super Final, which proved to be a close affair. Iballa made the better start to Heat 36 as she landed a forward and backloop, but Daida soon fought back with a stalled forward before edging into the lead with a stylish one-handed backloop to cement herself as the Queen of Pozo once again! Iballa may not have been able to quite defend her Single Elimination crown, but she should still be very proud of her performance over the last 9 days, which saw her return to the event podium having just missed out in 2019 – 4th, whilst the legendary Moreno Twins secure the top two places in Pozo Izquierdo for the first time since 2017. 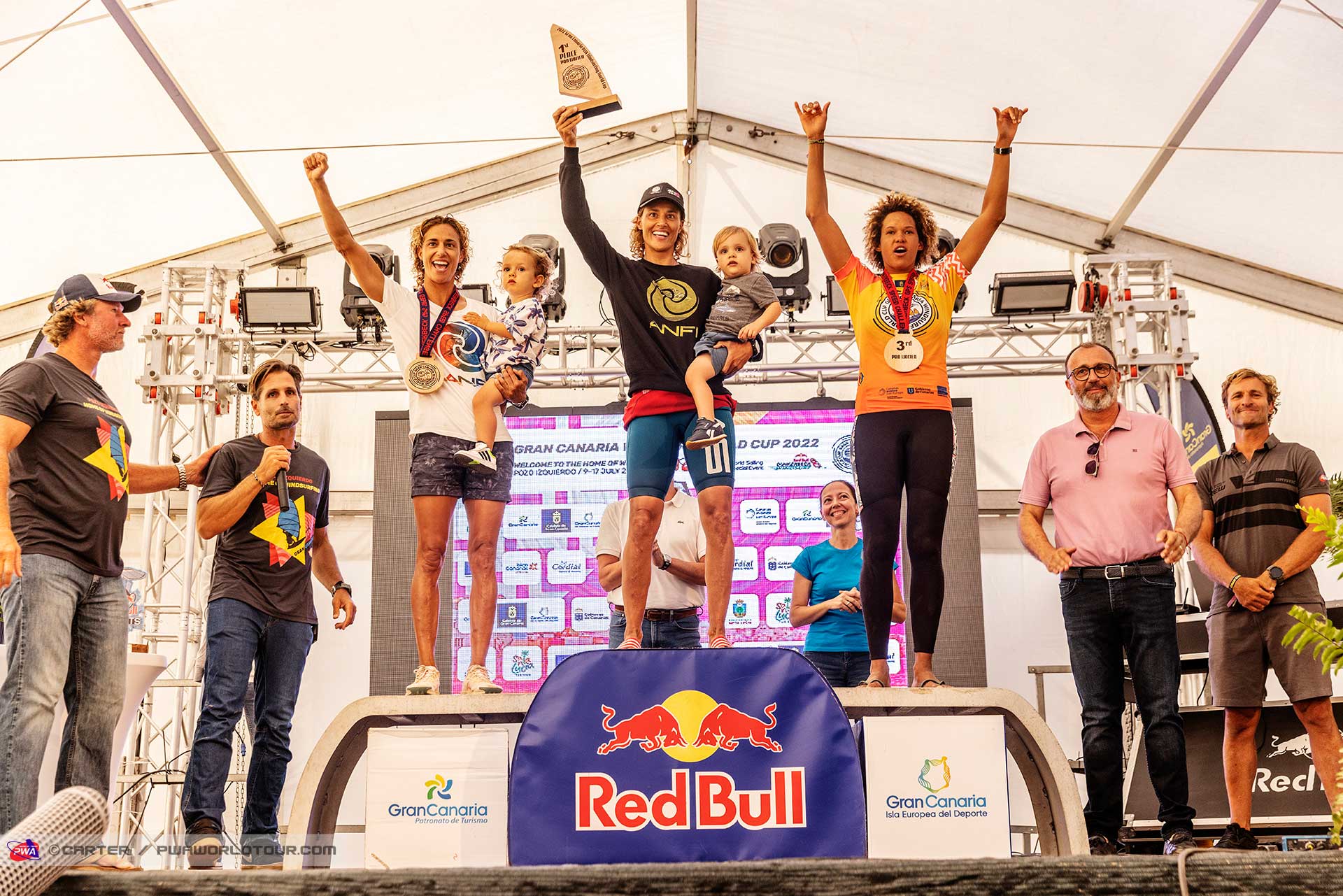 The other standout performance of the day goes to – Lina Erpenstein – who stormed her way back through the Double Elimination after a shock early exit in the single. The 25-year-old was on fire throughout today as she consistently landed huge stalled forwards and pushloops to win five heats on the bounce, which saw Erpenstein climb all the way into fourth place before Offringa ended her come back. 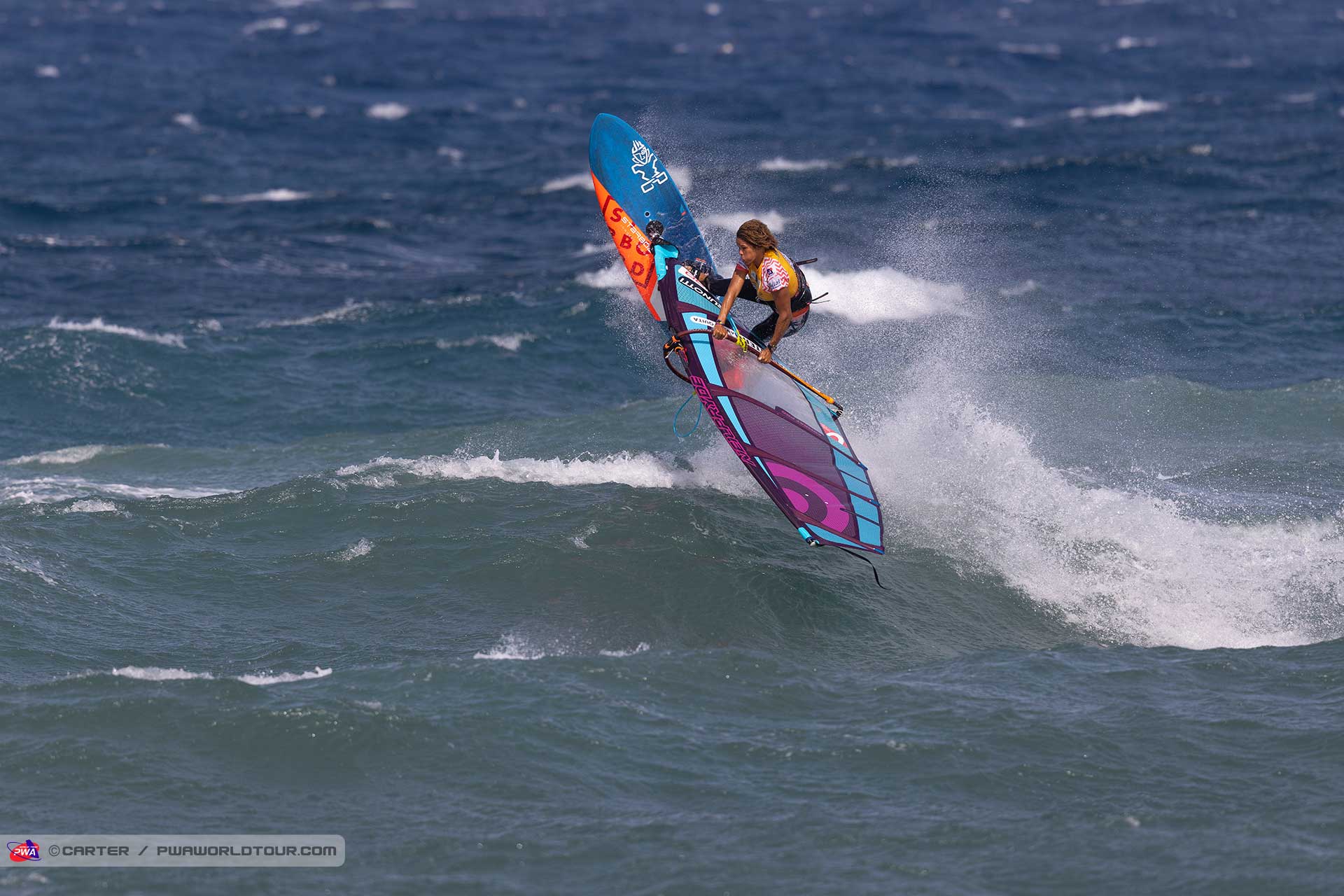 Philip Köster spent the afternoon watching – Marcilio Browne go on a rampage as the Brazilian climbed all the way through the Double Elimination to setup a tie against the German in the final. Köster having been on the sidelines all day watching the action go down came flying out of the blocks as he opened with a Stalled Tabletop Double Forward Loop to earn – 8.88 points – to set the tone. The 5-time world champion then set the beach alight as he landed a 7.1 metre Stalled Double Forward Loop to earn another 8.88 points – before bettering that effort by the end of the heat with a perfect Pushloop into Forward Loop – 9.25 points – which was landed almost immediately after Browne stomped a Tabletop Double Forward of his own, to put the result in no doubt. Philip Köster hasn’t put a foot wrong the entire and deservedly walks away with a 7th event title in Pozo. 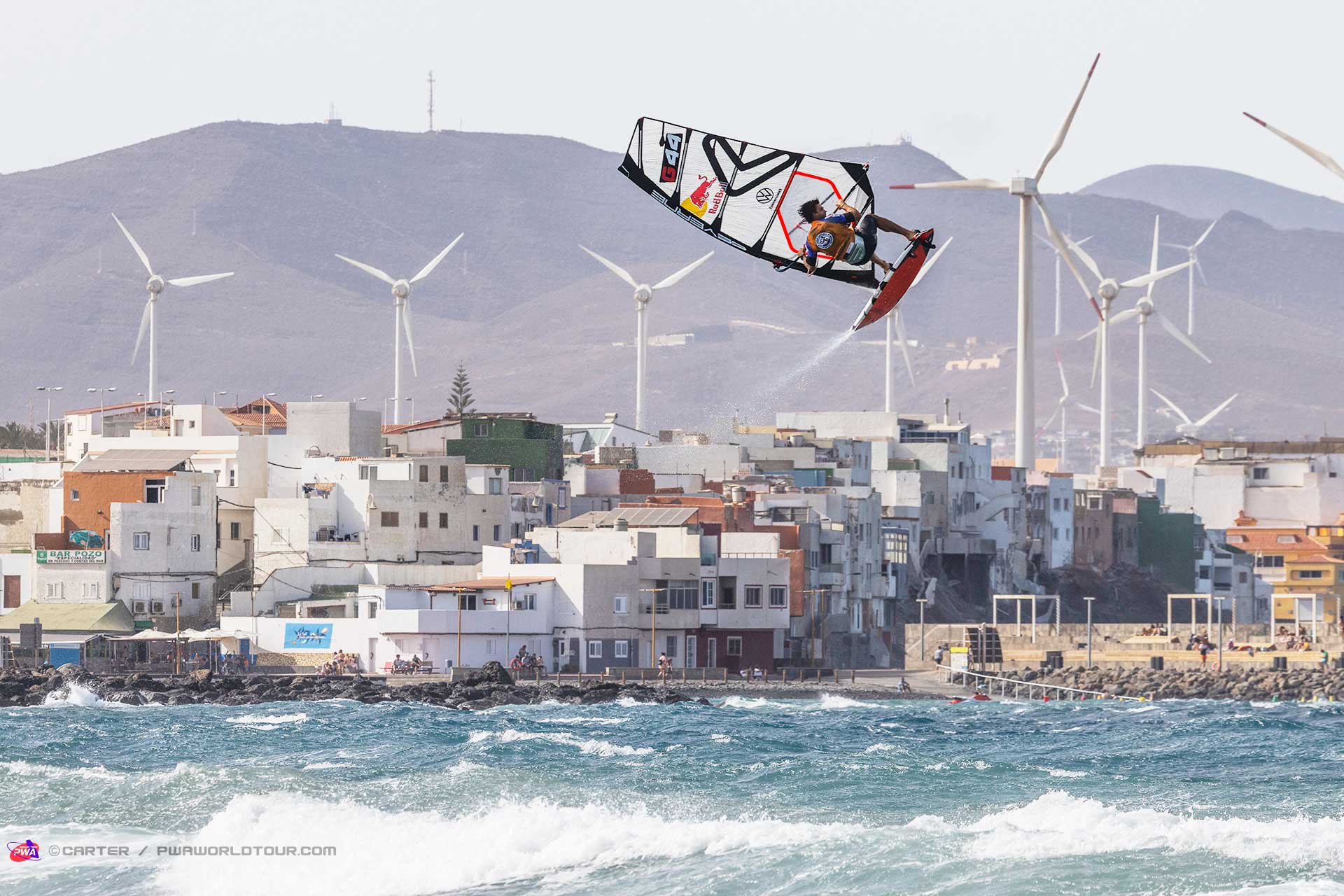 Marcilio Browne will be absolutely delighted with his comeback today, which saw the 2013 Wave World Champion win 6 consecutive heats to climb all the way into second place, which is not only a great result in itself, but it also puts the 33-year-old in command of the title race as he now jumps to the top of the overall rankings with a 3,745 point lead over his next closest rival – Thomas Traversa. 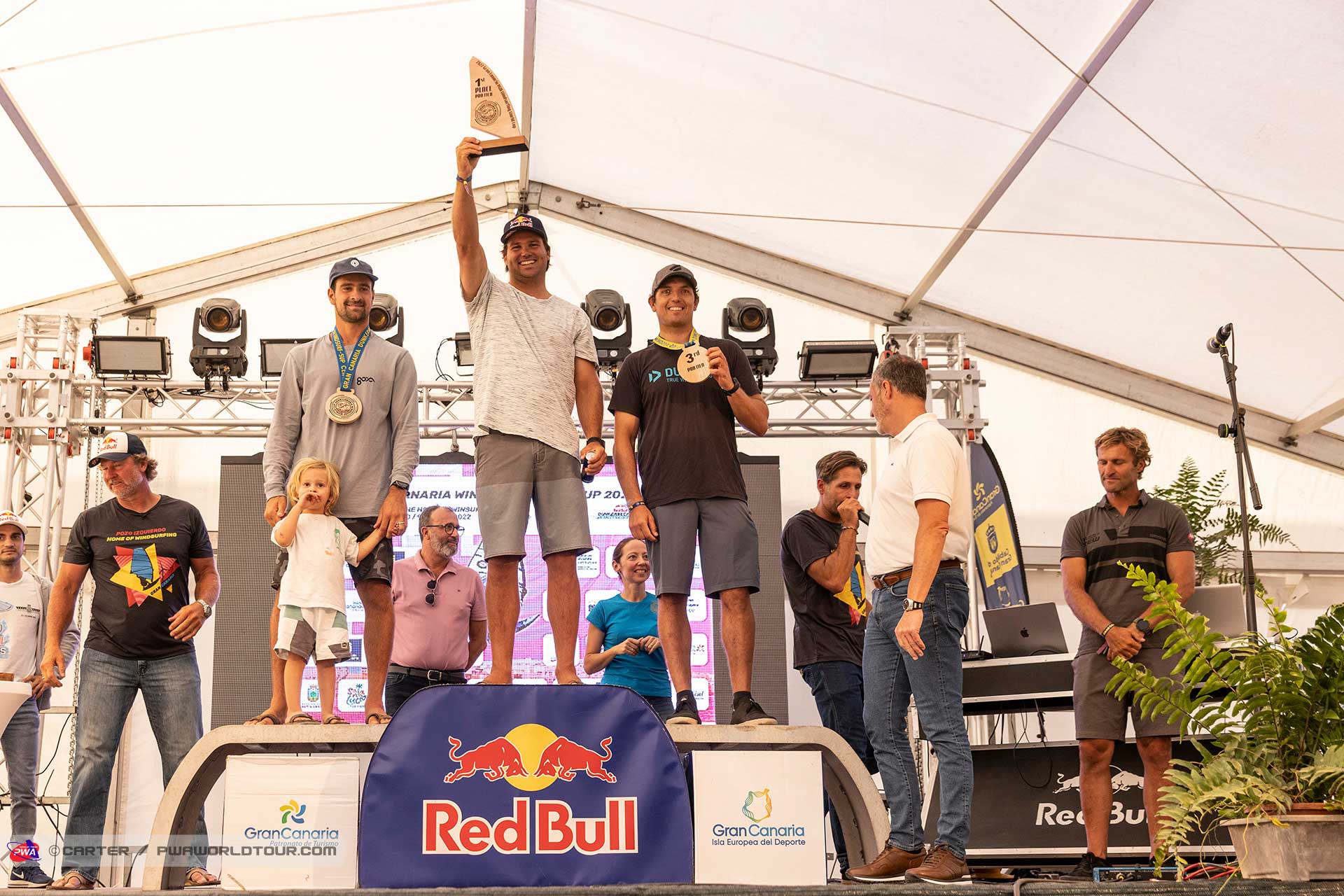 Where can I watch the winning heat?