A few days ago we have made an article about reducing the PWA wave fleet from 48 to 32 riders, which caused a lot of comments, positive and negative. > Link to the article

At the moment 26 riders are registered for the main event. Now, we have asked the PWA for a list of the sailors who will do the trials to battle for the remaining 6 places of the 32 fleet. The trials are not open for everybody and are limited to 12 sailors.

Rich Page: “The qualification will take the form of 3 heats at the start of the main event, with the top 2 sailors advancing from each heat of 4. This limits the costs and liabilities to the main event whilst still maintaining the opportunity for sailors to prove their ability. In reality, the trials are just a more detailed wildcard selection process, designed to ensure that riders have both the commitment and ability to deserve a place in the main event. “

The 12 sailors, who will do the trials 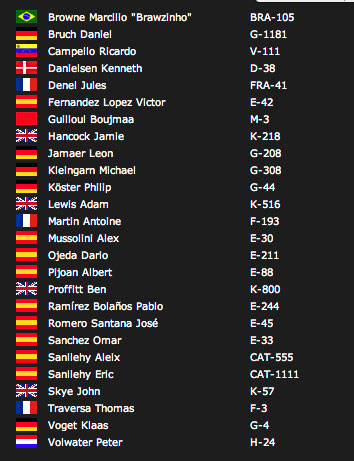 Maybe you have asked yourself why Boujmaa Guilloul, who was injured for a long time, got a fixed place, although he was not competing last year.

Rich Page: “Sailors who cannot compete due to injury have their seeding protected for a period of 12 months. This, in effect, means that their position is frozen from the point that they could not enter an event due to injury and will apply again at the next event that they participate in. In Boujmaa’s case in particular, although he was injured late in 2011, he was still unable to compete in the Canaries in 2012 and that was his reason for not taking part then. His ranking at that point (not prior to injury which was much higher still), was still high enough to qualify him directly into the main event in 2013, despite having not competed at the final event in 2011, and it was that ranking that was taken into consideration when awarding him a place in the main event under the conditions of his injury.”

The UK online magazine Boardseeker has an article online with a longer explanation from Rich Page about this topic.

[…] 17 year- old Moritz Mauch is one of the 12 sailors, who are doing the trials for the PWA Gran Canaria Wind and Waves Festival. We arrived yesterday […]

Wow, this qualifier is stacked! Will there be a livestream?

Hi Peter!
We have asked the PWA and there will be a live stream and live ticker on the PWA site. We will be in Pozo, too and will report and put pics and videos online.
Cheers!
Medea