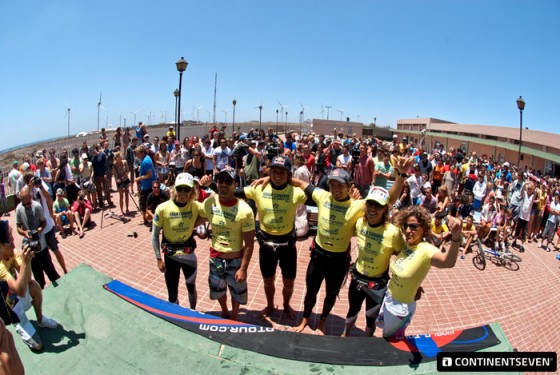 The 2011 PWA Pozo is finished! Today were the best conditions of the whole six days of competition. Wind for 3,7 to 4,0 m for the men, 3,0 to 3,3m for the ladies and 2 -3 m high waves with clean steep sections, whichs allowed great moves. Philip Köster and Daida Moreno could hold off their opponents, Victor Fernandez and Iballa Ruano Moreno in the double elimination with only one heat and both defended their first places from the single elimination.

The first heat between Kauli Seadi and Alex Mussolini had been started on planned schedule at 09.30. The sun was still deep, but the conditions were much better than expected. Kauli took advantage of the good waves and landed big jumps, like a tweaked Pushloop or a double Forward. Alex scored extremely high in waveriding, but this time he could not compensate a missing jump with his always incredible high waveriding points. Alex is definitely one of the favourites, if it comes up more to waveriding. 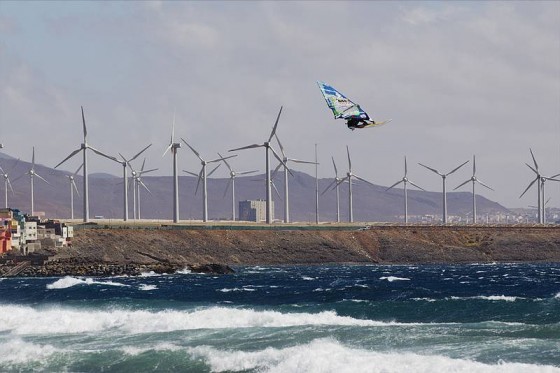 In the next heat local Dario Ojeda was up against Robby Swift and he definitely was on fire. It looked like Dario took Robby down in waveriding and jumping. Dario landed, despite some pain in his left shoulder, big table top Pushloops, huge Backloops, Swifty had a good heat, but this time it was not enough. So, he shares with  Alex Mussolini the 7th position.

Dario Ojeda continued his great performance. He knocked out Kauli Seadi and defeated Marcilio Browne. Then he faced Ricardo Campello, but the heat got cancelled due to the missing waves. It was definitely a fair decision, although Ricardo had collected already good points on the scoresheet through his jumps. It was a quarter past 11.00 and the  racedirector Duncan Coombs decided to wait for better conditions later the afternoon. Just half an hour later the waves returned and the heat went into sequence again. 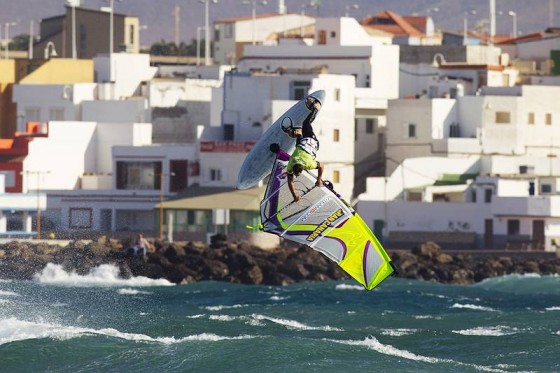 Dario could find his perfect rhytm immediately and sailed extremely well with the same tactics like in the previous heats. Aggressive waveriding with difficult moves like wave 360ties, backside and frontside. He most of the time placed the tricks in the steepest part of the waves and it worked out great. The waveriding with high difficulty mixed with huge Backloops, tweaked Pushloops and double Forwards or extreme Table Tops put him on top over Ricardo Campello, who again demonstrated that he is one of the guys, who can take most of the risk on the water landing crazy Forwards or double Forwards. This time he made it on the 4th overall, loosing the podium in the double elimination to local Dario Ojeda.

Dario had to sail in his 5th heat of the day against one of the event favourites, Victor Fernandez, who had won last year and had been already 6 times in a final in Pozo. Victor sailed his heat of the event and landed almost everything he tried. Plus he catched a massive wave, probably the biggest one of the event and went on top nailing a perfect Backside ride. Victor was on fire and for sure Philip watched him from the beach. He landed Double Forwards, huge Backloops, big Backside Airs, a massive Backside 360ty. Dario looked a bit tired, but still landed several high airs including a big Backloop plus scored on the waveriding side. Sometimes th wind dropped a bit while the heat, what made it a bit more difficult. But overall the conditions while the final heats were the best of the whole final day and probably of the whole event. 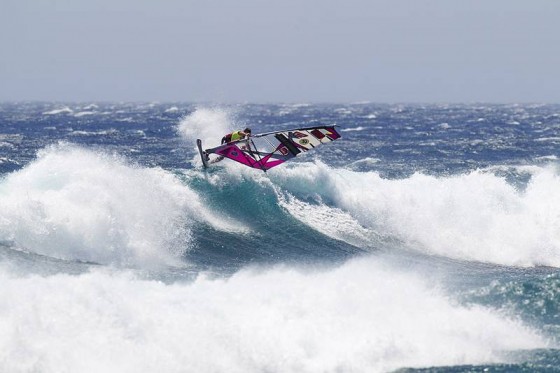 In the ladies fleet 5 heats had been sailed on the final day. Karin Jaggi continued with the rhytm of the previous day and fought back on the podium defeating Evi Tsape, who finished her comeback event in excellent 6th position. Jaggi convinced with very solid waveriding in the steepest sections. In the heat against Iballa Ruano Moreno the Swiss sailor lost. Iballa showed the better jumps, like a Tabletop Forward. So again Iballa faced her twinsister Daida in the final, who had won the final of the single elimination. What we then saw in the ladies final was crazy stuff!!! 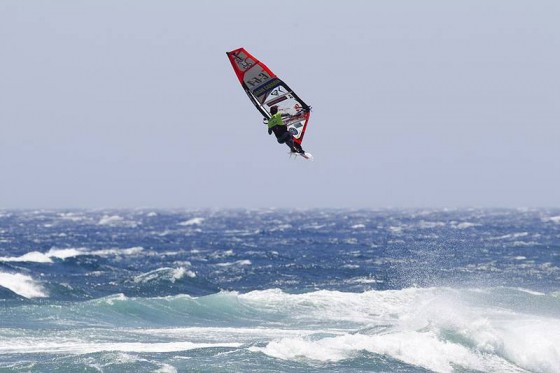 Daida went for a great double Forward. She came out in the waterstart position, had a huge frontside Aerial, a perfect Taka, massive Backside Airs, huge Frontloops, tweaked Pushloops, a clean onehanded Backloop and a frontside Aerial. Iballa fought and also went for a double Forward, which was not fully rotated on the second rotation, but a tough attempt!! She nailed a super high clean Backloop and scored high with aggressive cutbacks! Daida took the win over Iballa in an extremely thrilling final. Both of them demonstrated, how they could improve their skills over the last year despite they are already in the thirties. Big congrats!
THE FINAL

The final in between Victor Fernandez and Philip Köster got started 14:55. The wind and waves were up. We could watch nice sets rolling in and 35 to 40 knots of wind, with stronger gusts in between.

Köster opened with a Double Forward sailing on 4,0. Victor, who decided for his 3,7, answered with his Double. The show went on. Köster landed a few massive jumps, like a clean double Forward, almost planned out of it and a huge Backloop. Victor collected a lot of point in waveriding landing even a nice Goiter, which he pulled out of the white water. Then he went for a huge Backloop near the bunker, relatively far out. After he landed he did not start anymore and waved with his arms. Francisco Garcia, his caddy and young PWA wave competitor sailed the bigger set with a 4,0 out to Victor. We got later the info, that the rope at the boomend broke. What a bad luck for Victor! Already two years ago he broke a rope at his extension in the final against Philip.

The 4,0 was a bit big for Victor. He also was on the bigger board. And Philip decided to swap gear from 4,0 to 3,7. Plus he went for a triple Forward attempt. The first two rations were nice, but after he rotated a bit in the third one he let the gear go. Big congrats for trying it in a final!!

After the triple attempt Philip went for an insane waveride mit a massive Backside 360° plus a very fluid Taka and a Reverse attempt. And the seventeen year old super talent already sailed with a lot of pain in his left knee. Earlier the heat he went down on a Pushloop Forward attempt, when he rotated after the first Pushloop in a very inverted second Pushloop and crashed extremely hard.

Victor landed a big Backloop on the bigger gear, but crashed on a massive wave 360ty. This time Vargas local Philip Köster took the victory over Victor Fernandez in an exciting final, which attracted several hundred people on the beach.

Later at the pricegiving inside the Centro Windsurf Internacional the emotions went high and a big crowd of spectators watched the announcement of the winners!! Around 15.30 the this years PWA event was over. In the evening the official pricegiving was taking place at the Gloria Placa Hotel. Most of the riders will leave soon to the next event onTenerife.

The full elimination ladder of the men´s double here

The full elimination ladder of the women´s double here

Congratulations to Philip, especially to his first triple approach in a competition ever. But also to Victor, who has still a very high level and is one of the best wave surfers ever. Not to forget all the other competitors who fought tooth and nails for good results, at a very high level, too. For sure congratulations to the moreno sisters, who try to push the limits of womans surfing to the level of the mens fleet. Altogether it was the world cup with the highest level in wavesurfing ever. We hope for a similar or even more exciting event… Read more »