Day 3 at the Fuerteventura Freestyle World Cup 2019 was the day of the single elimination finals in the women and men eliminations. The conditions improved around midday and the red flag went up at 1.48pm. It was a very exciting day with Sarah-Quita Offringa and Steven van Broeckhoven on top of the rankings in the end. 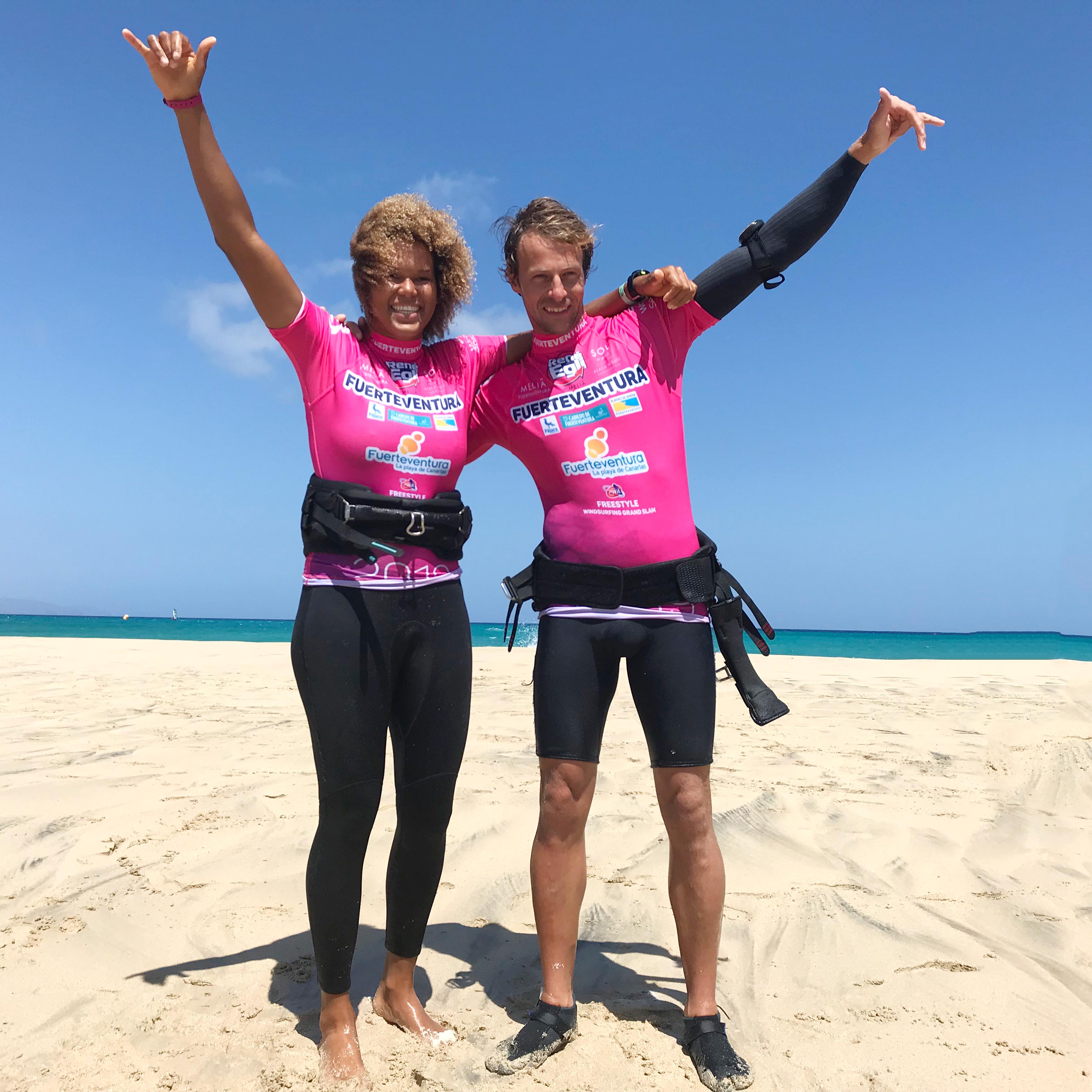 Sarah-Quita Offringa won against Maaike Huvermann in an exciting 10 minutes final. It started around 15.09pm. Maaike was leading the heat for a long time, but the Arubian changed the whole heat in the last minutes and won by 11.2 points difference at the end. Sarah-Quita won on both tacks landing Culos on both tacks for instance. Her highest score she received for a clean executed Burner (13.6 points) on the way in. Maaike showed that she again improved her moves and landed a brilliant Shoveit Spock, one of her favorite moves. Oda Johanne from Norway defeated the Dutch Arrianne Aukes and completes the podium in third.

Video from the final & Interview with Sarah-Quita Offringa

33 year-old Belgian Steven van Broeckhoven, the 2011 PWA freestyle World Champion was the dominating rider on the water during the single elimination finals. He won his semi-final heat against Youp Schmit with the high score of the single elimination (179.3 points) and the final against Jacopo Testa with the second best score of 174.1 points. Steven had a much higher score on starboard tack in the final and impressed with super clean landed double moves. He planed through a double Culo for instance, a Kabikuchi or a Burner into Burner. He as well landed a super clean Pasko or Bongka on port tack, but Jacopo was almost equal on points on the way out landing a Bongka, a Skopu, Burner and a Shaka. Steven again showed the younger riders, that age doesn’t matter at all in freestyle windsurfing. He is the third oldest rider in the fleet. Only Nico Akgazciyan (34) and Taty Frans (35) are older. Good luck for the double elimination!!

Video from the final & Interview with Steven van Broeckhoven

Jacopo Testa had strong heats, but lost to Steven in the final by 13.1 points. In the semi finals he defeated Belgian Dieter van der Eyken, the PWA freestyle World champion from 2015, with a great heat and 165.9 points. The heat didn’t go for Dieter like he had wished, but he will fight back in the double elimination. His plan was to win one heat in the finals at least. But he as well lost the battle for place 3 against Bonaire local Youp Schmit, who is a serious freestyle world title aspirant this year. He shows unique moves like the one handed Ponch (Flonch) into one handed Ponch (Flonch) and he lands other double moves like the Culo into Culo very safe with a lot of power. You won the heat against Dieter with 5.5 points difference.

The first round and two heats (10 heats in total)  of the second round in the men’s double elimination got completed in the late afternoon. We witnessed a lot of great freestyle windsurfing by the young generation. Thumbs up to the youth! The wind forecast looks promising for tomorrow and the plan is to re-commence the double of men and women tomorrow until the last three heats. Interesting aspect: if Gollito Estredo will make it through the next two heats he will face Amado Vrieswijk. A lot of excitement and drama is guaranteed for tomorrow. 21 or 22 need to be completed to know the final winner of the 2019 freestyle event in Fuerteventura!!

Hi!
During the live stream Ben pointed out a few times that Fuerteventura is probably the last freestyle event this year at PWA tour. Do you know any details? What about Sylt?

It is not decided yet but it seems that the Sylt organizer is unfortunately lacking of money for a three discipline event this year and they have to reduce disciplines. Right now rumors say, there will only be a wave event but still in discussion.

Thank you for the information!?