Stormy conditions with gusts far above 40 knots made the Slalom racing on day 3 at Sotavento extremely exciting. Antoine Albeau and Ben van der Steen took advantage of the heavy conditions and each of them took a victory. 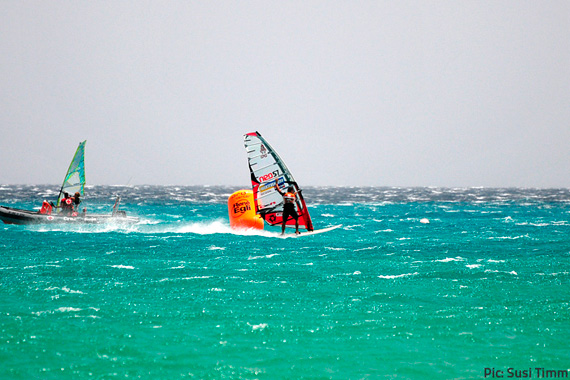 The Slalom action at Sotavento started at 10.00 with the skippersmeeting. While on the parking place above the big event tent the people still had their parties going on, which started in the evening of the previous day, most of the 56 competitors were getting their gear ready for the action.

At 10.30 the first heat was on and the racecrew already measured gusts up to 36 knots. While the day the wind picked up to over 40 knots and we saw a lot of crashes, not only at the marks. Most of the sailors were on sails in between 5,5 and 6,3 m. The worst crash of the day had probably the Austrian Manuel Zugsbratl, who crashed on the finishing line hitting his shinbone. Luckily nothing broken, but he has got a big bump. 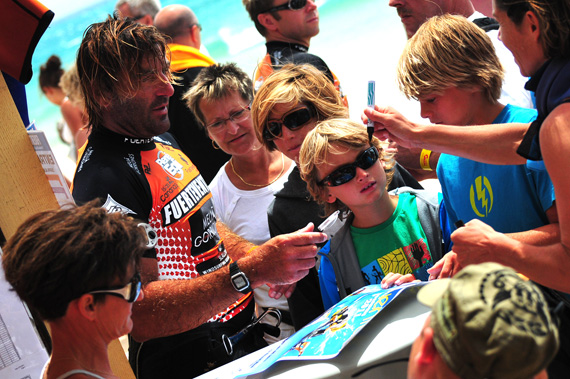 Antoine Albeau took the hammer down in the first final of the day. Always on his heels was Cyril Moussilmani, the winner of race 3.  In third came Ben van der Steen, followed by Finian Maynard, Sylvain Moussilmani, Taty Frans and Jimmy Diaz. Both, Jimmy and Taty, had qualified for the final through an extremely risky jibe at the last jibe mark in their semi final runs.

After an one hour lunch break – the second round of day 3, the 5th elimination was on. And this was the elimination of Dutch sailor Ben van der Steen, who nailed a perfect first jibe after blasting in the pack with Peter Volwater and Cyril Moussilmani towards the first mark. Benny kept the lead till the end of the race and put himself in second position overall. Current leader Antoine Albeau crashed at the first jibe mark, but still made it in 7th position. In second place came Cyril Moussilmani and in third Peter Volwater.

Benoit Moussilmani won the second losers final of the day 3.

After elimination 5 round 6 straight got started and the first 8 qualifying heats could be completed already. Afterwards the competition saw the end of the day.

Tomorrow, on the second last day, the skippersmeeting will be at 10.00 and the first possible start at 10.30. The competition will see two more very exciting days due to the fact that the top 5 sailors are within less than 10 points difference. Antoine has 3 victories already. 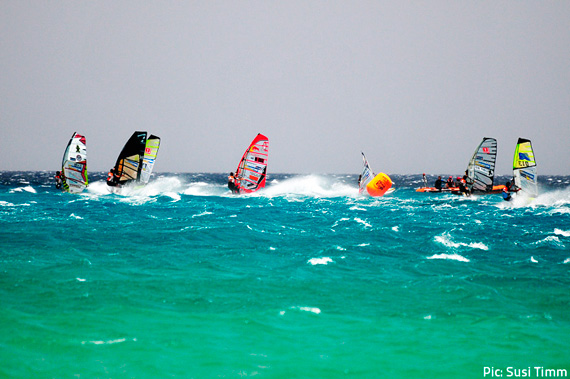 PROVISIONAL RANKING (after 5 eliminations including one discard)