Antoine Albeau wins the PWA Slalom at Sotavanto, Fuerteventura in a thrilling final in front of his fellow countryman Cyril Moussilmani and the Dutch sailor Ben van der Steen. Björn Dunkerbeck kept the lead in the overall ranking. The fight for the 2011 Slalom title is still open! 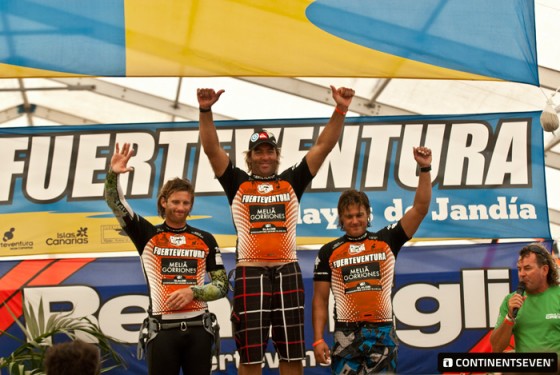 The top 3 at Sotavento, Fuerteventura.

It was a very exciting final day at the PWA Slalom event at Sotavento, Fuerteventura. Because Antoine Albeau broke a mast in round 1 of the last elimination and failed to qualify, the French sailor Cyril Moussilmani had the chance to win the event with a victory in the last elimination nr. 10. But he finished 3rd.

The tension on the beach was high, before the last winners final got started. Antoine Albeau, who had won elimination 9 was in the lead but only could wait, what will happen in this final. If Cyril would win, he would have lost due to a very bad luck. 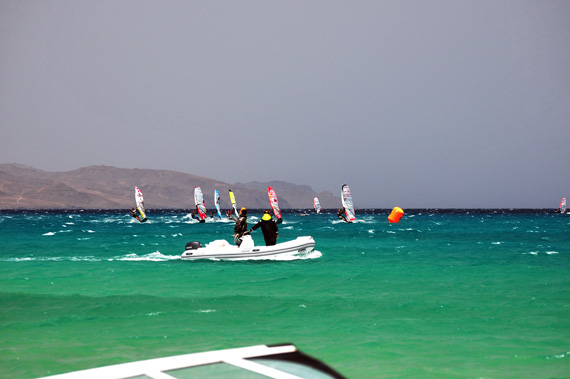 “An extremely nervous Albeau sat watching from the beach as the green flag was raised and the slalom elite charged over the start-line. Angulo opened the race at terminal velocity, putting him in the lead whereas Cyril Moussilmani was further down the fleet. Micah Buzianis crashed extremely hard, catapulting over a chop and was out! Maynard and Dunkerbeck were rapid down the straight and able to beat Angulo to the mark. Eager to win a final, Dunkerbeck pulled two super smooth gybes, fending off Maynard and Van Der Steen at every turn. Cyril was trying everything he could to make his way to the front, but the top three weren’t making any mistakes. Dunkerbeck claimed the final with Cyril coming in fourth, much to the relief of Albeau on the beach.” (PWA, Ed Sinclair, Press Officer) 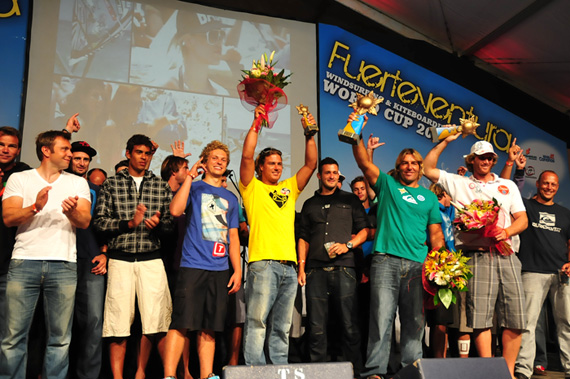 Antoine again took a victory and could proof, that he is extremely hard to beat in strong wind conditions. Björn Dunkerbeck, the current tour leader, struggled on his smallest sail, the 6,2 m and already announced, that he will register a 5,6 and a smaller board in 2012 again. That´s a strong message and it looks like, that he will stay on tour for another season in 2012. Cyril, who had the lead on the second last day by 0,1 point probably missed to have better result on elimination 9, when the wind was lighter earlier the morning. But the pressure on him was immense and he never was closer to win his first PWA Slalom event in his career. Ben van der Steen also had definitely the chance to win the event. He was fast in all kind of conditions and had extremely consistent results. The overall standing is the proof, that he is ready to win in all wind conditions. He sits in third, just behind Björn and Antoine, but in front of Cyril, who will try everything to win in light wind conditions as well, which we could see in the next two upcoming events at Alacati and Sylt.

“I had a very bad start on the final and could not pick up Björn Dunkerbeck, Finian Maynard and Ben van der Steen. Second is a good result, but first would have been better. If the wind is strong, I always have the chance to win. Let´s see, how it will go at Alacati!” (Cyril Moussilmani, 2nd winner at Fuerteventura 2011)

“We had a great week with great conditions and wind in between 20 and 40 knots. I am very happy to win here and keep the fight for the title open. And I am also very happy, that Cyril made it on the podium this time!” (Antoine Albeau, Winner at Fuerteventura 2011)

Now the whole slalom fleet moves to Alacati, Turkey, where the next PWA Slalom starts on the 8th of August.