Extremely hard conditions on day 4 challenged the world´s best Slalom riders at Sotavento. Thijs van der Meer measured gusts up to 40 knots on the starting boat. The water was flying and big gusts forced the riders to grab their smallest sails, fins and boards again. 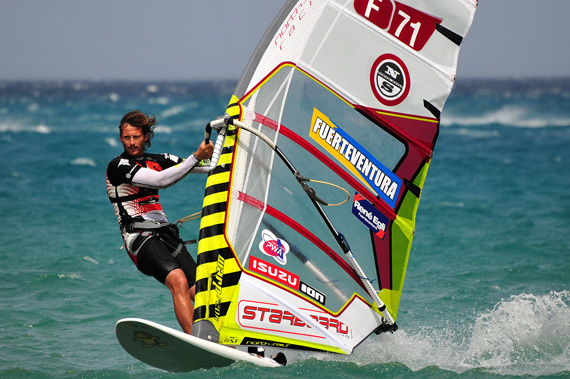 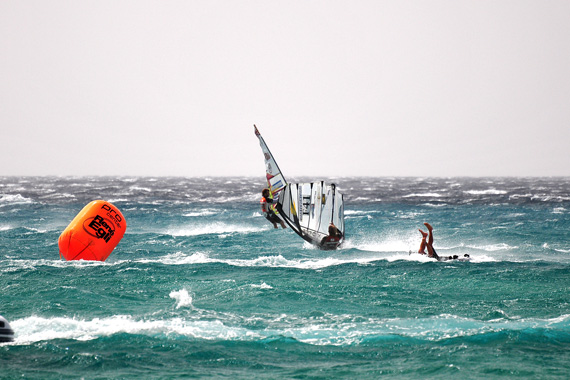 At 10.30 elimination 6 got continued and Antoine Albeau took another victory on the Slalom, which included a speedrun next to the some hundred spectators, which already lined up from the morning on next to the boiling water at Sotavento. Cyril Moussilmani was on form from the early morning on and finished race 6 behind Antoine in 2nd position, followed by Ben van der Steen. So the top three placed sailors did not struggle at all. Finian Maynard won the losers final in front of Björn Dunkerbeck.

Just 15 minutes later, after race 6 was finished, the PWA crew started race 7, which should bring the second discard. And again it was Antoine Albeau, who finished the winners final in first position. This time Ben van der Steen followed in 2nd and Cyril Moussilmani in 3rd. It looked like Antoine again would be hard to get this time.

But everything changed after an one hour lunchbreak. Antoine crashed in his semifinal run on the first leg with a massive wipeout, even breaking his harness lines. Luckily we got the wipe-out on camera. You can watch it here

So the door for Ben van der Steen was open to take the overall lead. But he went over early inteh winner´s final and this time it was Cyril Moussilmani, who took the win in a final for the second time and the overall lead very very close to Antoine, who could win the losers final. He could overtake Björn Dunkerbeck at the last outside jibemark by sneaking himself on the inside. After rotating the sail in 40 knots Cyril was extremely quick in position and could overtake the current Worldcup leader from Gran Canaria. Now the fight for the win at Sotavento is open and for sure we will see a big final fight!

For tomorrow, the final competition day, a bit lighter wind is forecasted. The plan is to run 2 more eliminations. It will be again a very close final decision, which we already saw at other events this season, like in Vietnam, South Korea, Costa Brava or Aruba. The 2011 season is an extremely windy racing season  with a lot of tight results in the end. The level again improved from last season and there are several sailors, who can make it to the finals. At the moment Cyril Moussilmai, who took the lead in the overall ranking. He is just 0,1 points in front of an extremely strong sailing Antoine Albeau. In three we see Ben van der Steen, who definitely had the chance to take the lead, but went over early at the important final. Now the pressure is extremely high on all three of them and day 5 at Sotavento, Fuerteventura will bring the final decision!

Results after 8 eliminations (2 discards including):