At around 11.30 am the ladies double elimination got started and the wind got stronger with the rising tide. After 5 women heats the the men double elimination got recommenced and we saw great freestyle action until 5.30 pm. 9 women and 18 men heats got completed in total, what’s a total competition time of 243 minutes. Imagine that’s more than 4 hours, what’s equal with 2.7 football games or two Formula 1 races;-)

Compared to the previous days, the wind stronger and most of the men were on 4.2m to 4.4m sails and women used a size or two sizes smaller. The ramps were a bit bigger and steeper and we saw more airtime. 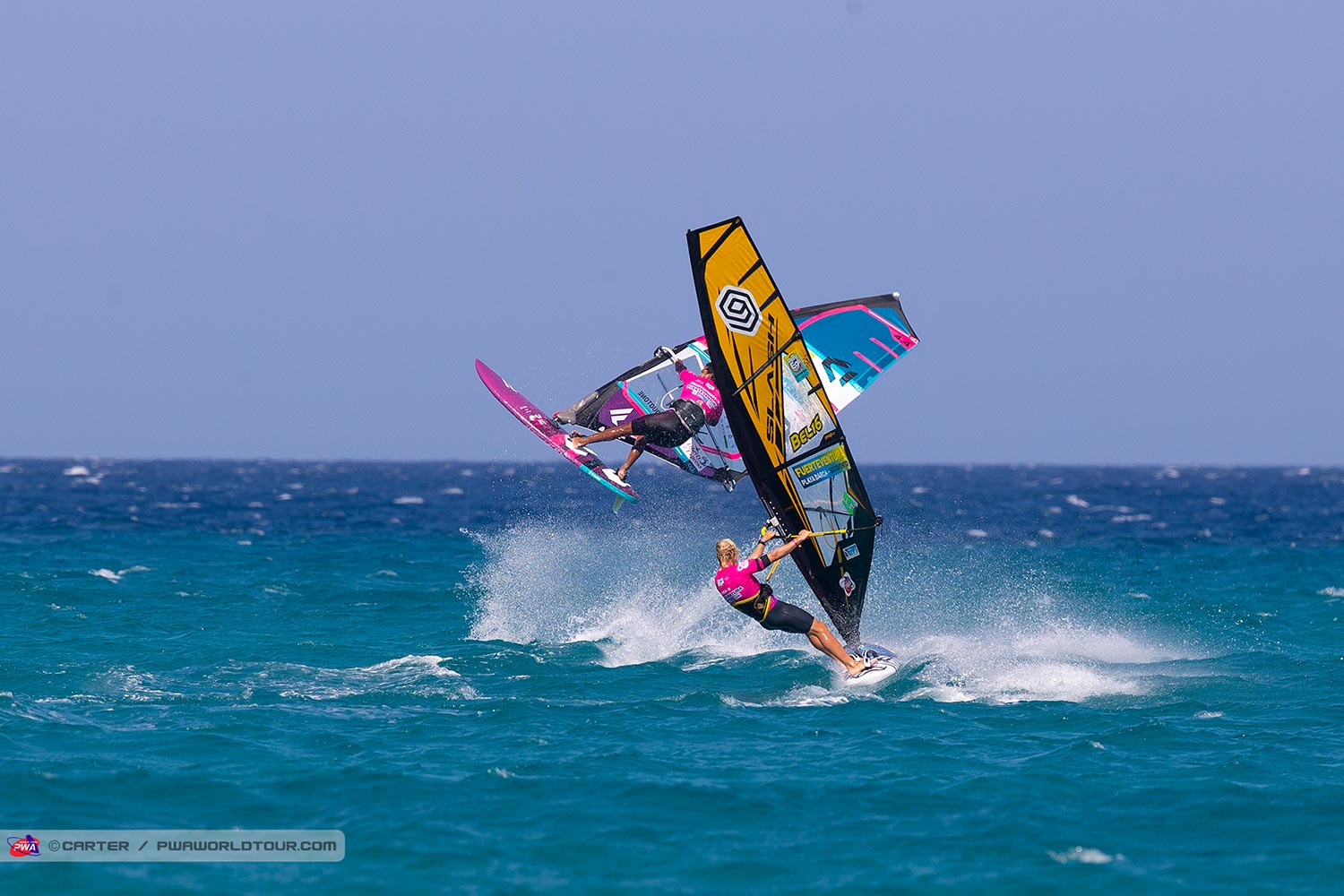 In the women’s fleet Olya Raskina had a great comeback after her baby break and won 4 heats in the double elimination winning against Alexa Escherich, Clare Elliott, Lina Erzen and Johanna Rümenapp. The Russian got only stopped by Dutch Arrianne Aukes, who will face Oda Johanne in the next heat for place 3.
Johanna Rümenapp from Germany was able to show what she is capable of and made it through two heats in the double. She finishes the event in 6th place.

Yentel Caers ripped through his heats, defeated Gollito and advanced to the top 4

In the men’s fleet we saw a firework of power moves and a bit more air moves compared to the previous days. Balz Müller’s comment about day 4: “Finally we have proper wind!”

We saw a great come back from from the 9-times Freestyle World Champion Gollito Estredo, who seemed to be unbeatable in the beginning. He won 4 heats in a row but lost his 5th heat against Yentel Caers by only 0.1 points. The result was 169.5 to 169.6 points. Yentel, who made it through two heats before he faced Gollito, risked a lot and beat the El Yaque local on starboard tack by almost 5 points. After this close heat Yentel faced fellow countryman and 2015 Freestyle Champion Dieter van der Eyken. Again it was a tight heat but Yentel won in the end.

Yentel’s next opponent is be Bonaire local Youp Schmit, who finished in 2nd at the first PWA event in Bonaire. Yentel was 4th in Bonaire. One of these two riders will take the overall lead in the Freestyle World ranking tomorrow afternoon or will be even awarded with the World Champion title. Rumors say, there won’t be a freestyle event in Sylt this year as one of the main sponsors dropped out.

Amado Vrieswijk’s title chances aren’t that good as he will finish the event in 9th in the best possible case. Amado lost his heat against Gollito Estredo today. Gollito had a great day, reached the highest scores of the day in his heat against Corto Dumond with 174.70 points and 170.60 points against Antony Ruenes.

Plans for the final day

The first possible start is scheduled for 11.00am. We can expect a big final. The wind forecast looks good. In total 3 or 4 women heats and 3 or 4 men heats need to be completed to know the final winners.