Gollito Estredo won the first PWA Freestyle event of the season and took an early season lead in front of Amado Vrieswijk and Adrien Bosson.

The first day of the event saw great conditions with winds gusting up to 40 knots. The extreme wind produced steep ramps for a perfect freestyle show, which definitely was the most radical action we have ever witnessed at Lake Neusiedl. The double elimination was completed on day two in 15-20 knots of wind, but the victor remained the same with Gollito Estredo, although Amado Vrieswijk managed to win the first winners final against Gollito. With this win the Bonairian enforced a super final, which acutally was heat 10 for Amado in the double elimination.

We hooked up with some of the riders for a final statement about the competition. 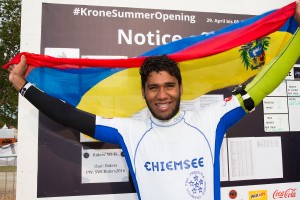 Gollito Estredo V-10 (1st place)
Winning the first event of the season gives a lot of confidence for the next event. It is very important to start like this, in the top three. Like this you can be more relaxed and have no pressure. Now I am going to train in Adicora in Venezuela and I hope I can train a lot there and come even stronger to Fuerteventura. 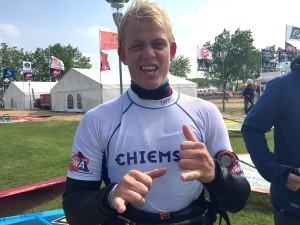 Amado Vrieswijk NB-20 (2nd place)
I am really happy. Of course it is always nice to win, but for me it is just about having fun. I sail better in the strong winds, but in the heat against Yentel in the single elimination I was so overpowered on my 4,4 as the wind kicked in so hard during the heat. It was just a mistake to take the bigger sail and of course I was not happy with the first day of competition, but this made me to even push more in the double elimination. Don’t ask me how I did it and I sometimes was forgetting which moves I already did. I was just kind of free sailing. With this new format to do just one move per tack you are more relaxed. In the final I had some physical problems, I was a bit dizzy and my legs were just fully cramped and I had problems with the pop. Once I even needed to stop to take the cramp out of my calves. I was drinking and I was eating, but you have a 5 minute break and then you go out again to sail another 12 minute heat. 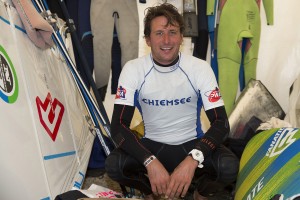 Adrien Bosson F-296 (3rd place)
It was the first time in a winners final and it felt really good. I was really surprised to finish the single elimination in the second place. Usually, I had a bad result at the first event of the year, but this year is different. Last week I sailed in really stormy conditions at home, so maybe this was my advantage to be used to the conditions we had on the first day. The conditions were insane. I wouldn’t ever have imagined such strong wind and challenging conditions on the lake at Podersdorf. On day 2 we got opposite conditions, from 4.0 / Skate 94 overpowered to pumping 5.2 / skate 100l. In the double elimination I met Amado, who had a fantastic come back. He sailed really good, I didn’t find the rhythm in this heat wich left me on 3rd place. I’m of course super happy with this result, my best one so far and I am stoked to make my first PWA podium. This year again the tour is short, 3 events, no discard and no mistakes allowed. So.. I couldn’t expect a better start of the season ! I hope we will have wind in Fuerteventura and Sylt! 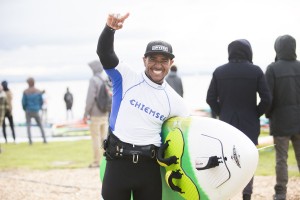 Taty Frans NB-9 (4th place)
The wind in my heat of the double elimination was pretty light and I wasn’t always planing. It’s a bit annoying. They should have cancelled the heat and wait for 10 minutes. But it is how it is and I am happy to finish 4th and Amado did really good and I am happy he finished 2nd. When I came to Austria I wanted to be in the top 5, so I am happy with my 4th place. The younger generation is killing it and I like to see it now. Yentel Caers, Sam Esteve or Amado Vrieswijk, the way they are windsurfing is amazing. They do all the moves in the air, like Double Air Culo or Air Skopu into Funnell. That’s the way we need to do the sport and take it to the next level. But also Gollito did the Shifty on the lake, which is amazing. 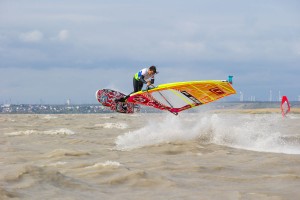 Antony Ruenes F-85 (5th place)
In the double elimination I sailed against Amado and he was sailing amazing. He started with a very nice Kabikuchi and a Spock Culo and I had no chance. But I am happy. The conditions were ok, was a bit light, but I can not complain about the conditions. 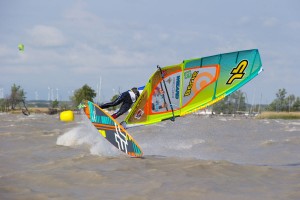 Yentel Caers B-16 (6th place)
I love the strong wind, the choppy and hard conditions. I am happy with my performance. I even had to use my 3,8 in my last heat of the single elimination. 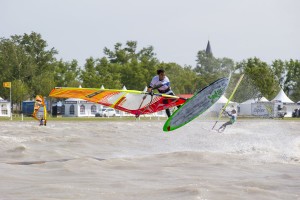 Kiri Thode NB-61 (7th place)
The level is really high. I am not really disappointed about the result, because I know I did some good moves. I still need to get used to the sails and new live scoring system. I like to do at least two moves in a row and here only one move counted per tack. And due to the delay of the 2016 freestyle boards, I wasn’t really prepared. I was training on different boards, I was using my old Flare 2013 and then I was using a prototype. Thanks to Dieter for borrowing me his 2015 board, but I was not prepared to sail on this board. Every board has a different pop and I did my best. Now I go back home and train and I will come to Fuerte with full power. 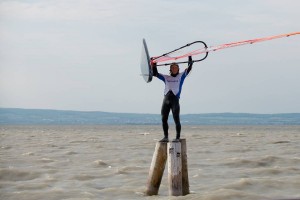 Balz Müller SUI-21 (7th place)
It was a nice event and I think I need now 4 days to recover from this quite intense half week. We had three days of really nice windsurfing conditions. One day was before the competition, but we scored two days of really good European conditions during the event. I really like strong wind, I love my 4,0 and I am really stoked with my result. But to be honest, I don’t like competition, especially to sail against a friend, because you won’t feel happy if you win and you won’t feel happy if you lose. This actually confuses me a bit. After the double elimination was no more wind, but it was a great event with nice tow-in and great parties. It is a bummer that it was the last time here at Podersdorf and I hope we can come back to this beautiful place. 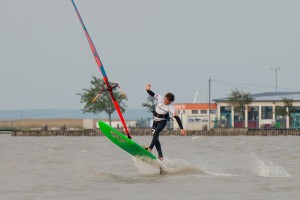 Dieter van der Eyken B-35 (9th place)
In the single elimination I lost in a very close call against Adrien Bosson. In the double elimination I did not sail my best in the last heat. So it goes, I lost and I need to train harder. I missed to land my no handed Flaka, which I normally always land, but I was so cold on my feet that I was not able to balance the landing. I crashed it three times and on the other side I went for a Spock Culo and if I you would have done a Double Spock I would have won. It was a very close heat, but Yentel is a really good sailor, so it is all right. 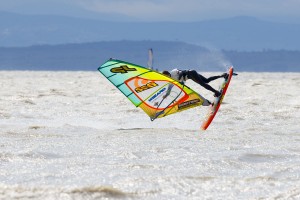 Steven van Broeckhoven B-72 (9th place)
This is my worst result since I started. I maybe had too many things in my head. I train hard and I felt really ready for the event. Losing is part of the competition and you need a bit of luck, too. Gollito is a good competitor and he knows how to handle the pressure. Normally me too, but this time not. Also, the new live scoring system is a bit confusing for me, especially only doing one move on one tack is confusing. There is no flow anymore. Normally you go and do your thing and don’t have to think on anything and now, it is like Oh, I am only allowed to do one move.  I have to sail out of the area, go upwind, come back into the area. And I need to make sure to land the move, otherwise I waste the whole time to go back and up. I like when the action is fast. Now I event don’t get tired during a heat and I don’t get into the flow. But the live scoring is good and maybe the judges and the system gets faster for the future. 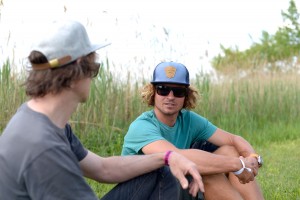 Phil Soltysiak CAN-9 (9th)
I won all the heats I could have won. In the single I lost against Bosson, who is 3rd and in the double I lost against Amado, who is 2nd. It’s always a good event if you are consistent and don’t make mistakes. It was good I was in Cape Hatteras before, because there it was like 14 degrees and wind for 4.0. Different chop conditions, but pretty similar sailing. 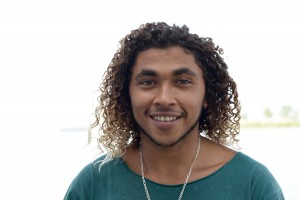 Hugo de Sousa BRA-204 (13th)
The first day we had really good wind and good conditions, but it was very, very cold. Before the event I was in Venezuela for training and it was hard to switch to the cold. I also was training most of the time with 4,4 or 4,8 or 5,2, but here I used my 4,0, which I do not use so much. My last heat was against Youp Schmit. I watched him and saw him crashing a lot. I did all my moves, so I do not really understand why I lost. But I am happy with my 13th place and I can see my improvement compared to last year. 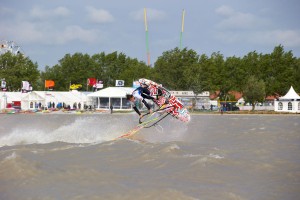 Davy Scheffers H-311 (13th)
I always wish to be better, but it is like that. It was a super nice event, I enjoyed to be here with all the good guys sharing our passion doing windsurfing. Next time a better result, but I got a good result in the tow-in (e.n. Davy got 2nd), so all is good. 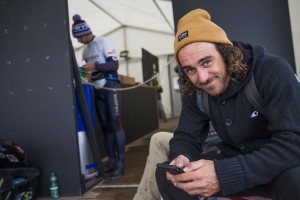 Nicolas Akgazciyan F-400 (17th)
The conditions were good, we can not complain, but it was really hard for everybody. I made many errors and I was not doing my moves. I didn’t make any Shifties and I didn’t make any new stuff I learned this winter. I was always looking for a ramp and in some of my heats I took a too big sail. I was more fighting against the conditions. Sometimes you win, sometimes you lose. But you have to learn from your errors and do not make them again. But, never give up and I am looking forward to the next event. Maybe I will go to Pozo for the wave event.

“It is a bummer that it was the last time here at Podersdorf and I hope we can come back to this beautiful place.” What?? Last windsurf event in podo ??

The contract for the event between Podersdorf and the event organizer is terminated and at the moment the fronts are hardened and the verbal exchanges even reached the newspapers in Austria. Many rumors are around, but time will tell and let’s hope the freestylers don’t lose an event.

That’s real sad news !! Eventhough it hasn’t been the windiest location of the history of PWA, I think the Freestyle world will miss this core event !

Typo… Hamie, Homie, Jamie… Thanks for the notice.