The riders spent the whole afternoon on the beach, waiting for the wind to pick up. It was the same picture like the day before. Light wind and big waves. But in the late afteroon, the sun came out and the wind picked up to 15-20 knots, allowing the men to start heat number 7 of the second elimination. The wind played havoc for many heats, but did allow the men to get as far as the finals of race 2, and the women to complete another full elimination. So the second elimination of the men is still not finished. 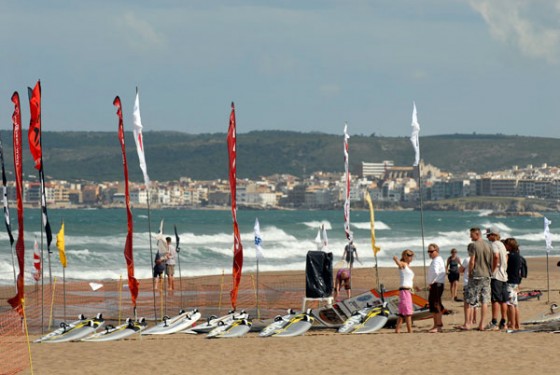 Equipment choices were key as big swells and gusty winds caused chaos on the racecourse. Sailors that could get away with smaller boards had a huge advantage when the waves jacked up, but where left for dead when the wind was down.

MEN
Minutes after Bjorn Dunkerbeck (Starboard, Severne, Mystic) hit the water his mast was in pieces. With very little time left before his heat, many of the spectators thought he’d blown it. However, luck seemed to be very much on his side. Just as the heat before his was about to go into sequence, one of the marks broke free from its anchor and surfed its way into the shore on the pumping swell. Luckily, this bought Dunkerbeck more than enough time to get to the beach and sort out some new gear.

Antoine Albeau (JP, NeilPryde) received a similar stroke of luck during his qualifying heat for the semi finals. Throughout the race he was seen playing catch up from a terrible start. By the final leg he’d only caught up to sixth position. However, the minute he sheeted in on the new side after the gybe the wind dropped below 5 knots. The race was cancelled, and Albeau was given the chance to race again!

Both Albeau and Dunkerbeck made it through to the winner’s final in the end, but the lack of wind towards the end of the evening stopped the competition from proceeding any further. 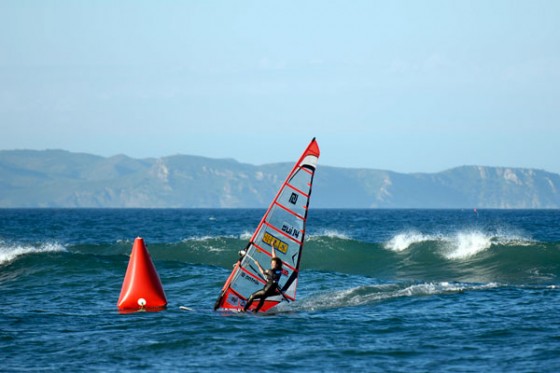 WOMEN
The awesomely consistent Karin Jaggi (Patrik, Severne) stamped her authority on the women’s fleet here in Catalunya today after a convincing performance saw her claim victory in front of her nearest rival Valerie Arrighetti (Tabou, Loft). This wasn’t without any dramas though. In her qualifying heat, Jaggi fell at the final mark after leading throughout the whole race. Luckily she managed to waterstart away having only let two of her rivals pass only to overtake them again and claim victory!

This leaves Jaggi and Arrighetti on equal scores as it stands, but if no more racing were to take place, Jaggi would take the event crown on count back.

The organizers remain hopeful that the current forecast will allow for more fast and furious racing to take place here in Catalunya over the next few days, so stay tuned to the PWA site.

Live GPS Tracking
When the action is heating up here in Catalunya, be sure to follow this link HERE where you’ll be able to track some of the world’s fastest windsurfers as they hammer their way round the racecourse at breakneck speeds.