After months of negotiations, we’re proud to announce the release of the 2011 PWA World Tour calendar. In what’s set to be one of the busiest competition years in recent history, all three disciplines (race, wave and freestyle) look to have a healthy share of the 14 event competition year.

The action starts with an all-new event in Mui Ne, Vietnam, which will see the PWA’s men’s and women’s freestyle and slalom fleets battling it out for a share of the event’s €100,000 prize purse on the palm fringed beaches of the South China Sea. Adding to the tally of new destinations, the World Tour will also pay a visit to the turquoise waters of the Caribbean for the first time since 2005.

Taking the plunge will be the freestyle and slalom fleets, who’ll christen Aruba’s waters in a week long Grand Slam extravaganza. The final new installment for 2011 is a stop on the wave drenched stores of El Medano in southern Tenerife. Like its neighboring islands of Gran Canaria and Fuerteventura, Tenerife enjoys the consistent north east trade winds which blow for the duration of the northern hemisphere’s summer. Couple this with a reliable supply of Atlantic swell, and you have the makings of a classic show down for the PWA’s wave fleet.

Standing alongside these new additions there’s the eclectic selection of tried and tested locations, which include the grueling European leg of the World Tour and slalom action in Ulsan, South Korea.

See here the provisional PWA event calendar for the 2011 tour. 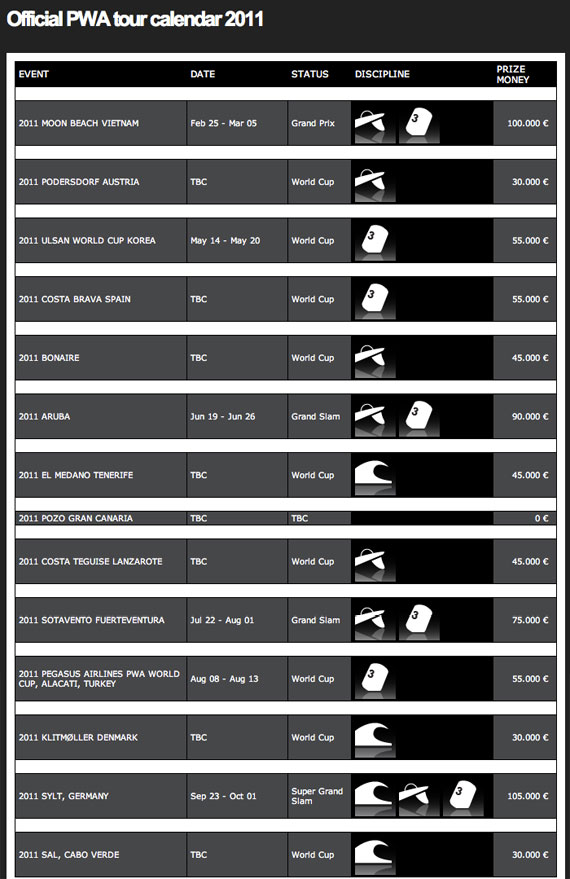 I would love to see guincho or marocco and one of those: chile, south africa, western australia or maui.

But i guess it’s all about money 🙁

the tour need more waves, why not maui?

Looking good.
Freestyle is back but it’s gonna be a super expensive tour especially for some freestyle guys from europe. pheeew

so no croatia then? 🙁