A dark cloud lingered over the event site throughout the day leading to a tactical day of racing on the Caribbean’s azure blue water. The gusts came through blowing anywhere between 8-20 knots leaving the sailors hard pressed for equipment choice when race director Juan Antonio Aragon called a start to the day’s proceedings at 10am. Fired up from yesterday races the PWA crew flew through two more eliminations and the opening round of a third before the winds backed off and the sailors were released, exhausted after a hard day in the office at 5:15pm. 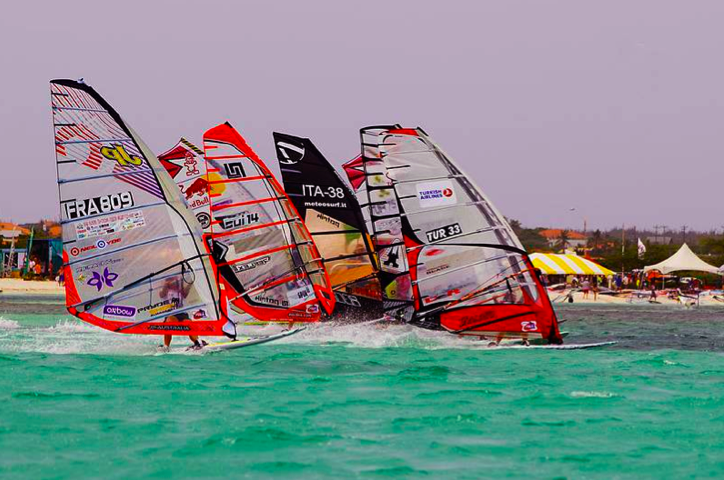 Antoine Albeau (JP / NeilPryde) opened the winner’s final with a blinding start securing him a significant lead after the first gybe. Arch nemesis Bjorn Dunkerbeck (Starboard / Severne / Mystic / DunkerbeckEyewear) failed to break through the pumped up fleet after starting at the back of the pack.  Pierre Mortefon (Fanatic / North) stormed off the line in the lead, but the pressure was too much as he dropped his gybe at the first mark allowing the rest of the sailors to fly by. Dunkerbeck switched into turbo drive as he stormed down the second leg, but with the lighter winds he could only manage to claw back into fifth place. A lull at the fourth mark saw the fleet hit a standstill but it had no effect on Albeau as he blew the competition out the water with a lead over well over 100 meters.

After a disappointing start in previous winner’s final Dunkerbeck made sure he was first over the line in this elimination. Eager to make his mark Maynard held second, fighting off Ben Van Der Steen (Starboard / Loft / Mystic) and Albeau. A slick gybe from Albeau saw him undertake the two off them and slide into second place. The remainder of the final became a two-man drag race between the sentinels of windsurfing. Dunkerbeck charged around the remaining marks with a hungry Albeau nipping at his heal. Both sailors unleashed everything they had in their armor to squeeze out every inch of speed but ultimately Dunkerbeck emerged victorious with Albeau second by a board length, leaving the crowds on the beach in hysteria at the excitement of the photo finish. 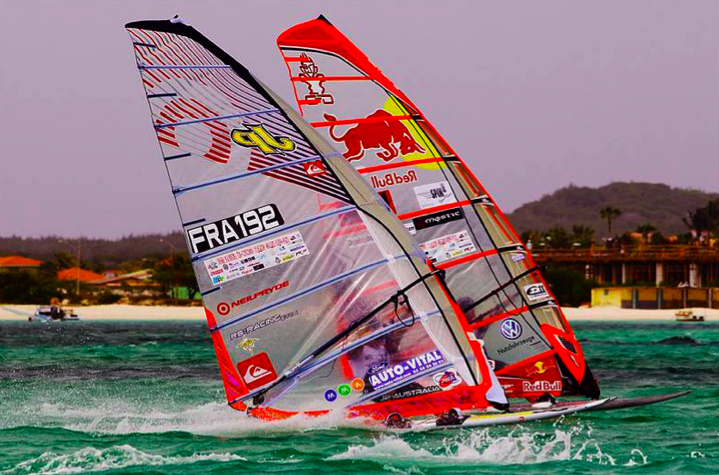 The women’s final opened up with a cautious start, as the ladies were unwilling to make a mistake early on. Disaster struck at the first mark for Valerie Arrighetti (Tabou / Gaastra / Mystic) when she lost control of her equipment and went down leaving her to fight for sixth place. Erdil spotted her opportunity early on and steamed into first place past Jaggi. Erdil managed to hang on to her lead throughout the remainder of the race as an enraged Jaggi went full throttle but she was unable to close the 30m gap. 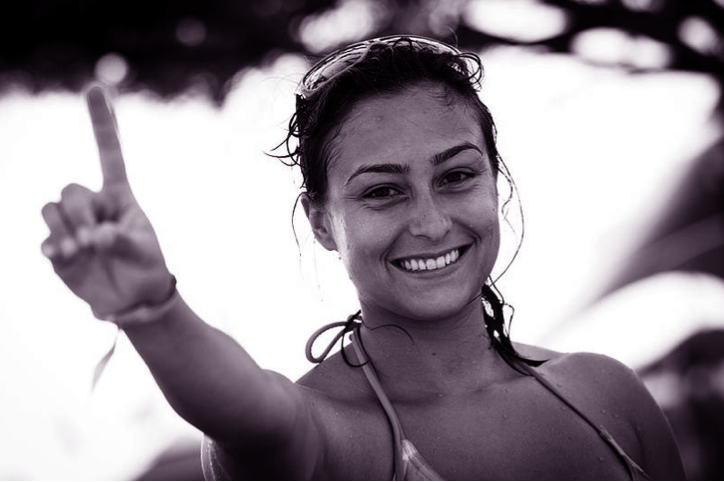 Alice Arutkin (Starboard / North) exploded over the start line placing her in first immediately, however Offringa was looking to make up her early mistakes and gave it everything she had on the second straight to steal first place. Chasing close behind the two leaders Fanny Aubet (JP / NeilPryde) put in a faultless race in an attempt to catch her enemies. Offringa managed to hold Arutkin off for the remainder of the race securing another victory to the sounds of the cheers from her home fans.

The fifth elimination of the men got started and the firts round could be completed. See the ladder here

Standout sailors of the third day in the Slalom competition:
There were a number of sailors that really stepped up their game today in the lighter winds.

Sarah-Quita Offringa (Starboard / Gaastra / Mystic) disposed of her opening disastrous streak and went on to win the winner’s final in the fourth elimination. Offringa crossed the line well over 100m in front of the rest of the pack.

Finian Maynard (RRD) delivered an exceptional day of racing seeing him work his way into fifth position having claimed a first place in elimination three losers final and a fourth place in fourth elimination showdown.

Up and coming British slalom campaigner, James Dinsmore (JP / NeilPryde) also deserves a mention. He made it all the way through to the loser’s final, proving he has what it takes to compete with the PWA’s most established pros.

“Tomorrow we pick up the slalom where it left off today, completing the remaining rounds of elimination five before going into the sixth race elimination. Tune in from the 10.00am (UTC-4) skippers meeting to follow all the action live,” the PWA stated.

I think this is among the most vital info for me. And i’m glad reading your article. But wanna remark on some general things, The website style is perfect, the articles is really nice : D. Good job, cheers