PULS Boards is a windsurfing custom board manufacturer from Poland. The owner Stefan Leciejewski has been making boards for several years and founded PULS Boards in 2012. Meanwhile they offer a range of wave and free ride boards with retail prices starting at 825€ and they as well create special custom shapes adapted to the needs of the customer. They focus on direct marketing that’s why they can offer such low prices. Although PULS Boards is a young brand, they have already many customers in Poland. 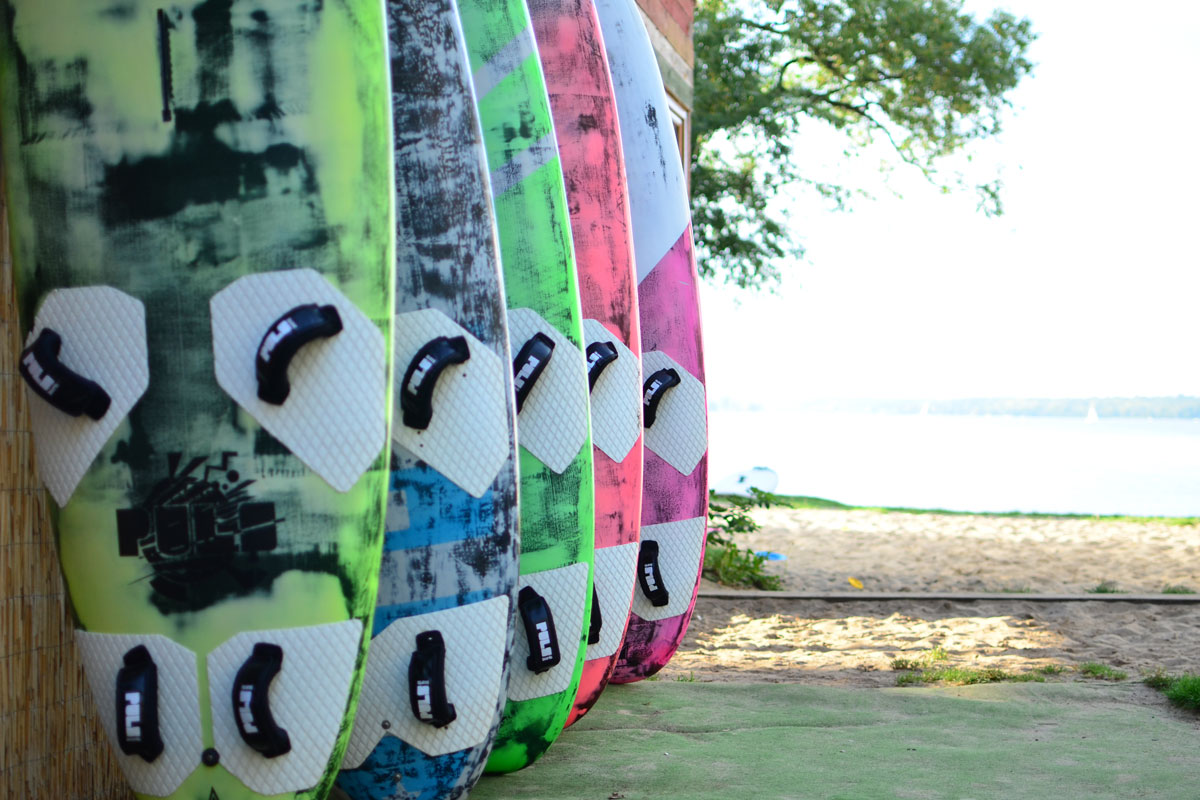 When was PULS Boards founded?
PULS Boards was founded in 2012 and the first board was created in 2013, but the idea was born half a year earlier. It was the time we spent on preparing, collecting information, getting contacts, finding suppliers etc.

Who are the people behind PULS Boards?
The most important person is Stefan Leciejewski, who is the shaper, owner, creator and founder of the Puls Boards project. Stefan has been crafting windsurfing boards for several years and is the owner of the biggest Polish windsurfing school at the Zegrze Lake near Warsaw. In his team also work 2 – 3 guys, who are responsible for the laminating process, grinding and finishing. One of them, Filip, is also the graphic designer. In the office sits Ania, who is managing everything.
But we can’t develop anything without the feedback of our team riders, who spend a lot of time on the water testing our boards. Our main team rider is Michal „Jumek” Palyska, who spends all his free time in the water, for instance 3 months a year in Pozo Izquierdo. He broke a lot of standard boards and tried to find boards, which don’t break but at a Polish price level. That’s why we started the cooperation. This year he got 4th in the Polish Wave Championships and he gained the „Rookie of the year” award. You can see him in action in the short clip „November”: https://www.youtube.com/watch?v=yMb5ZvpzQPc. Lukasz Trzaskowski is another team rider, who is with us since the beginning. He is one of the best Polish wave riders and his opinions and remarks are invaluable for us.

How and where does PULS build the boards?
We have our workshop in Nieporet (nearby the capital Warsaw) in Poland. All boards are shaped by hand. We use CNC for creating pads and fins, which are made of G10.

Which materials does PULS Boards use and how is the construction of the boards?
We use Carbon, Kevlar, Carbon-Kevlar, UD-carbon and of course fiber glass. We also test different materials, for example Dyneema. We produce boards in 4 main technologies, which are different from each other. In the hardest one, Platinum, we build a triple PVC carbon sandwich construction with full kevlar bottom and deck and UD-carbon shell, what allows the rider to jump high and land hard. And additionally it’s a rocks crusher machine.

Which boards does PULS offer at the moment?
We have 4 lines of wave boards: Pro Wave, Q.S., Compact and Free Wave and one line of freeride boards, which is named Free ride. We also create custom boards. We can build every board in every shape.

How can someone order a PULS Board?
The first step is filling out a form on our website. You can find it at the end of every board site. Interested clients can also send us an email or just call. We always respond each customer, to confirm all details, give advise if needed and decide together about the details. When everything is confirmed we send a summary by email. 50% of the final price has to be paid in advance to start with the production.

What are the delivery times for a „standard“ and „custom“ PULS Board?
Normally we need about 6 weeks to create a board from our “standard” offer, but we produce a lot of boards in advance, too, so we have boards in stock and the client just has to decide on the graphic and will receive the board within one week. For a custom board we need 6-8 weeks, depending on the amount of work we have. When we are not very busy, it’s possible to produce a custom board within 6 weeks, but we prefer to say that we need around 8 weeks for custom boards.

What’s special about a PULS Windsurfing board?
The most important point is their strength and impact resistance. We create everything by hand and spend a lot of time on every detail. That’s why our boards are really precisely made. We use very good materials and deliver a board in good quality. The second point is that a lot of riders would like to have boards with unique designs. In our standard offer we have a lot of possibilities for customizing the graphics without additional costs. Of course we can also create full custom graphics, depending on the customer’s wishes. The third point is, that we offer custom shapes. There are a lot of riders, who can’t find a board on the market which matches their expectations at 100%. The only choice is a custom board, which tends to be very expensive. That’s exactly the moment, when Puls Boards would be the best choice.

Cool, you are doing an intersting job. Good luck and I would love to test one of these boards in the Netherlands once.

Very interesting idea and the shapes look quite modern. The prices are yummy, especially when all the other brands get more and more expensive. Tests please!!!!

We have in plans “PULS Boards test days”. We will share test schedule when it will be ready 🙂

Where can we find reviews and tests about the boards?

In the link below you can find review about Puls Boards and Simmer Sails:

But it is in Polish…
Next review from the tests will be in English.