We hooked up with the two new hot shots in the PWA Slalom scene: Pierre Mortefon (FRA-14) and Antoine Questel (FRA-99). Pierre could win the second Slalom elimination at Jinha beach, South Korea and Antoine made it in third. Both already did several PWA tourstops in the past and could collect enough experiences how to make it on the podium of an elimination. 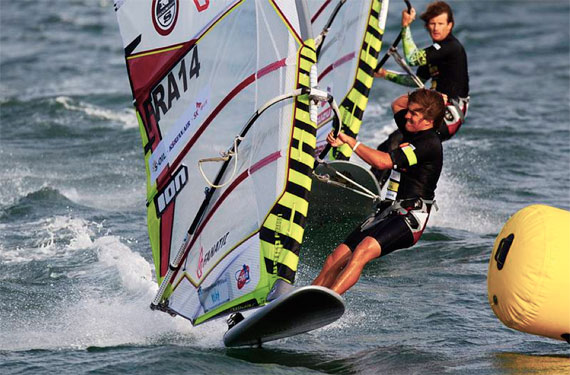 In the second final at Jinha there were big names in and it was a race with 8 competitors, no overearly which could have reduced the fleet. Pierre Mortefon and Antoine Questel fought against big names like Antoine Albeau, Steve Allen, Josgh Angulo, Gonzalo Costa Hoevel, Cyril Moussilmani, Josh Angulo, Ross Williams!  Some big names and perhaps the world´s fastest sailors like Finian Maynard and Björn Dunkerbeck did not make it to the final of the 2nd elimination. Ben van der Steen and Arnon Dangan also missed the final.

If we have a look on how Pierre made it to the final, we can see that he placed once 3rd in the first round and just made it twice with the necessary 4th position, but could dominate the final with an impressive start and a perfect first leg. Antoine made it three time in 2nd position in his pre-runs and then he finished third at the final, behind Pierre and Cyril Moussilmani. 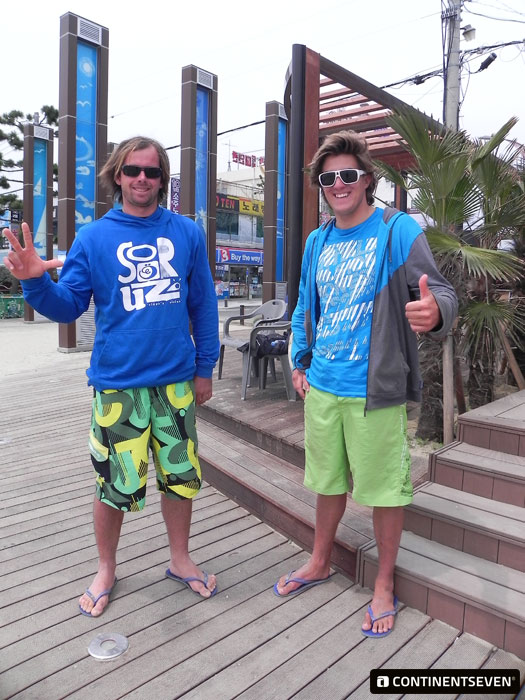 Antoine Questel (left) and Pierre Mortefon on the day after their success (Pic: continentseven.com).

C7: What´s your weight? You don´t look like the most heavy guys on tour?

Antoine: My actual weight is 93 kg. 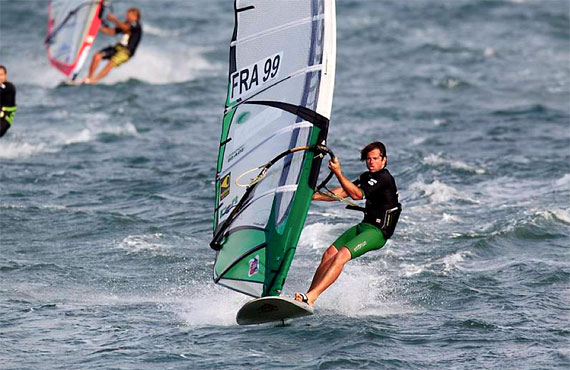 Antoine Questel on fire in the final of the second elimination at Jinha (Pic: Carter/ PWA).

C7: What was the main reason you could win the final of the 2nd elimination, Pierre?

C7: What gear did you register for the 2011 PWA Slalom season. You are allowed to choose 3 boards and 6 sailsizes only for the entire season!

C7: Pierre, you had some great results on the PWA tour already?

Pierre: Yes, definitely. I made two finals in Alacati in 2010, finished an elimination at Fuerte in 3rd last season as well and finished in 9th at Costa Brava overall.

Antoine had up and downs in his last years season with a 19th overall at Costa Brava, followed by a 26th at Fuerte, a 32nd at Fuerteventura and an excellent 19th at Sylt , where he could win a loosers final in round 5.

Pierre: Antoine (Questel) and myself train a lot together. Additionally we have the French tour with 3 tourstopps, what also helps to stay focused.

Antoine: South of France delivers excellent conditions with many days of strong wind. So I can work on my speed and have a lot of chances to test my gear and change the setups. Additionally we are a team in France and we can train together. 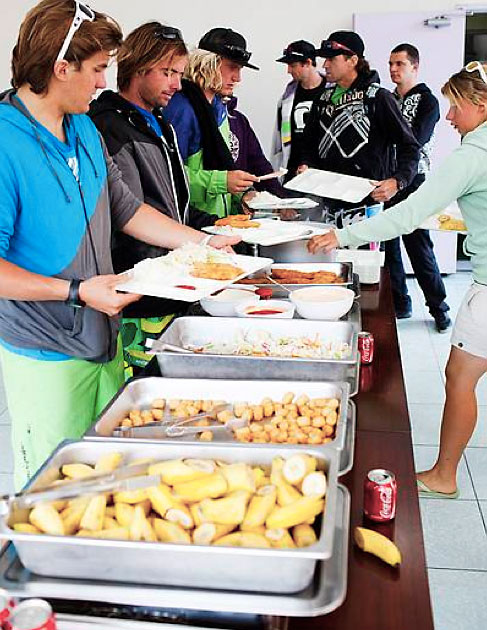 C7: A last question! What is your favourite tourstop on the PWA racing circuit?

Antoine: To me it´s Westerland on Sylt!

Check out the websites of Pierre Mortefon and Antoine Questel!

The PWA press officer Andrew Buchanan made as well an interview with both of them on the same day. Read the interview below.

PWA: Pierre, you won the second race elimination here in Korea, did you expect to do so well in these conditions?

PM: I really like the conditions we get here in Korea. In the race final I had my 7.8m and 111cm board, so my medium board and sail combination. They worked really well in the conditions we had; the water state is pretty flat here. In the race I was lucky to get a really good start, and I had good speed down the first leg, and when I saw I Icould move up the fleet into first place at mark one, I managed to do a really good gybe to put me into the lead on the second leg. It was then I realised that it was going to be possible to win my first race final. It was a great feeling!

PWA: Now you’ve seen that you can beat guys like Antione Albeau and Björn Dunkerbeck, do you think it will give you more confidence racing, and potentially lead to more race wins?

PM: I think so, and I certainly hope so, but it is really difficult to beat these guys. They have so much experience, and amazing board speed. But since last year, I have been sailing in more and more winner’s finals, and gaining more experience. Last year I got a third place in one of the race eliminations in Fuerte, and now I have arrived here and won a race. I know it is my first, but hopefully it won´t be the last, as things are moving in the right direction now.

PWA: Over to you Antoine, you had a great second race here as well, finishing in third. Did you train specifically for these conditions before coming out here?

AQ: I really like the conditions we get here at Jinha Beach. They are really similar to the conditions I get back in Brittany, so it was really easy for me to prepare for coming out here by just sailing at home. On the second day we had really good conditions for racing, so I could put all my practice into action in my heats. It was really good to have it pay off by coming third in the elimination.

PWA: Do you think you’ll be able to post more podium finishes out here if conditions stay the same?

AQ: That depends. The start is so important out here. My speed around the course is ok, so it all depends on if I can get a good start. If I can take a good start and enter the first gybe in a good position, then I think I stand a chance of posting more podium results. So for me, the start and first mark are where things are decided. I can´t rely on my board speed alone, there is more to it than that.

PWA: Do you have a favorite event on the World Tour?

AQ: That´s a tough question, but if i had to pick one it would be Sylt. It´s a bit cold there, but I love the atmosphere. There are so many people watching from the beach, and there are so much energy surrounding the event. I really like it.