Over the sea movie – Interview with Andraz and Steven

“Over the sea” is the new movie by the Slovenian freestyle windsurfer and filmmaker Andraz Zan featuring the 2011 Freestyle World Champion Steven van Broeckhoven. Last December Steven, his girlfriend Svetlana and Andraz have travelled to Sao Miguel do Gostoso in Brazil to produce this clip. We wanted to know a bit more about the making of and what they are up right now and did interviews with Andraz and Steven. 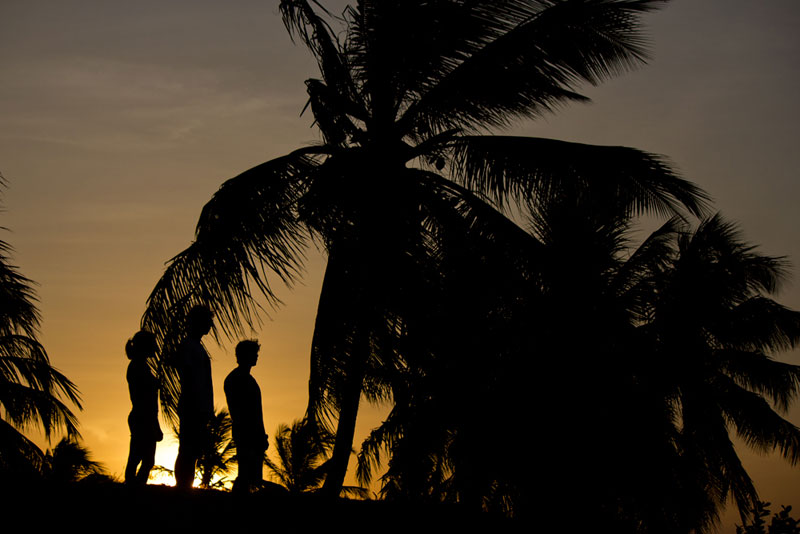 C7: Where and when did you produce the new movie?

Andraz: The movie was produced in Sao Miguel do Gostoso, Rio Grande do Norte, Brazil and on the spots nearby, where the conditions are very nice for filming. We were there for three weeks in December.

C7: Why did you choose the title “Over the sea”?

Andraz: “Over the sea”  is actually over the Atlantic Ocean, but I wanted to use a little bit different name for the place as we have so many videos from Brazil these days.

C7: How long will the movie be?

Andraz: The movie will be a little bit longer, around 12minutes as there are three parts. I want to show three trips with different nature, actually two parts and the main place/spot where we stayed. I was filming every day during the three weeks. So it would be a pity not to use more than half of the clips and produce just a short 4min clip. 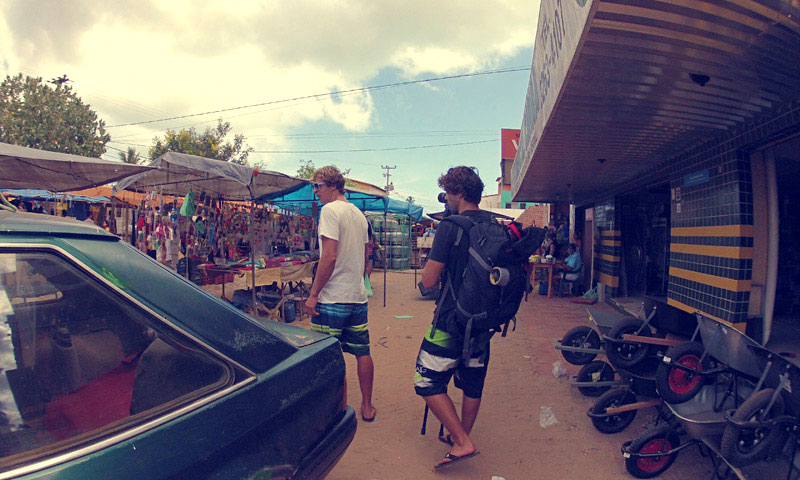 C7: How is it to work with Steven?

Andraz: It’s really good to work with Steven. He is really professional and always does what’s expected from him… even if the conditions are really bad for sailing he goes and at least tries. Sometimes he is even too stubborn and doesn’t want to rest… But all in all he is easygoing and super motivated. That is why it’s cool to make projects with him.

C7: Any great story you want to tell about the time in Brazil?

Andraz: Almost every day it was kind of a cool time and something funny happened, but the best were the trips which will be also in the movie. Very long, with a lot of work, but also great fun. The trip to Galinhos was memorable the most. We had an awesome drive along the beach coast, then we were searching the spot quite a while, because nobody knew where it was, even the locals. We took a little bit wrong way to mangroves, when the water was getting up, so we almost got stuck in the mud. But luckily Steven is a strong man and he pushed the jeep almost by himself. At the end we finally made it to the spot. The wind was picking up and the landscape was one of my favorite ones, which I’ve experienced. We had just one day, so we got the most out of it… More you will see in the movie!

C7: Is he a better free sailor or the better competitor?

Andraz: He is very good in both! For sure in free sailing, when he has perfect conditions, he can perform amazing moves, which were never done before, but a lot of times he goes over the limit at competitions as well. So it really depends on his mood I think.

C7: What are the best conditions for filming with Steven?

Andraz: Strong constant wind and very beautiful spots with flat water or even better organized chop. This are the best conditions to get perfect shots with crazy action. 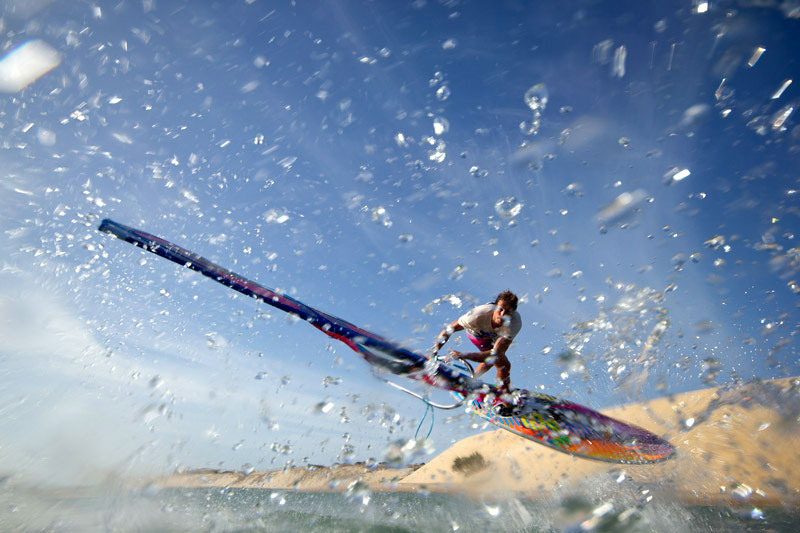 C7: Was it the “best sailing Steven” you’ve ever filmed?

Andraz: Not really… The conditions were not flat and sometimes it was quite a chaos on the water. So it was hard to get the moves I wanted on the camera. Sometimes it was not enough wind, when we went to the lagoon or it was a little bit too gusty, when we had bad luck. But despite the hard conditions it was amazing to film him there, because a lot of times I was surprised what Steven was able to do in chopy waters.

C7: You are a windsurfing competitor, too. Is it hard for you to be behind the lense instead of sailing?

Andraz: For sure… I was sailing maybe just 5 days in 3 weeks… Always when we had the best conditions of the day I was filming. So later on it was really hard to sail. But the thing is when I film I kind of get in that filming mood and I don’t think so much about it. So it’s fine for a while. If I want to sail for myself I have to go for another trip or just extend the trip where I film.

C7: Where are you right now and what are you doing?

Andraz: I’m in Gudauri, Georgia at the moment, filming for a girls snowboard production – Lipstick productions.

C7: With which equipment did you film the clip “Over the sea”? 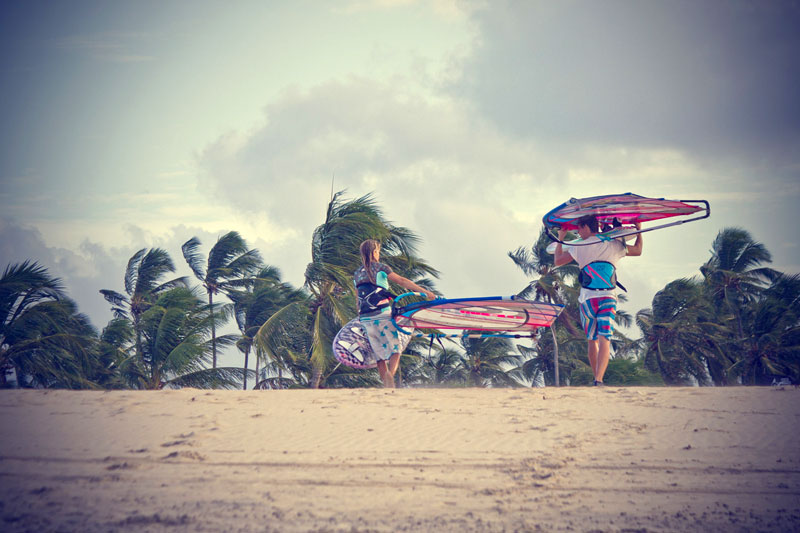 C7: How was the time in Brazil filming for movie “Over the sea”?

Steven: We had a good time. I flew together with my girlfriend Svetlana Martynova and Andraz Zan to Brazil to make something really sick. I had a lot of fun sailing and Andraz about filming. So we were the perfect team, though we didn’t know how everything will be.

C7: Andraz and you are a well known team. Why did you choose Andraz to make videos for you?

Steven: Andraz is a good friend, we travelled many times together and we always had a good time. During the past years he is full on with filming and he does his job 100% even with low budget.  It’s amazing what he can make, he really knows what he is doing. Each time he improves his skills and camera gear.

C7: How much gear did you bring for that trip? 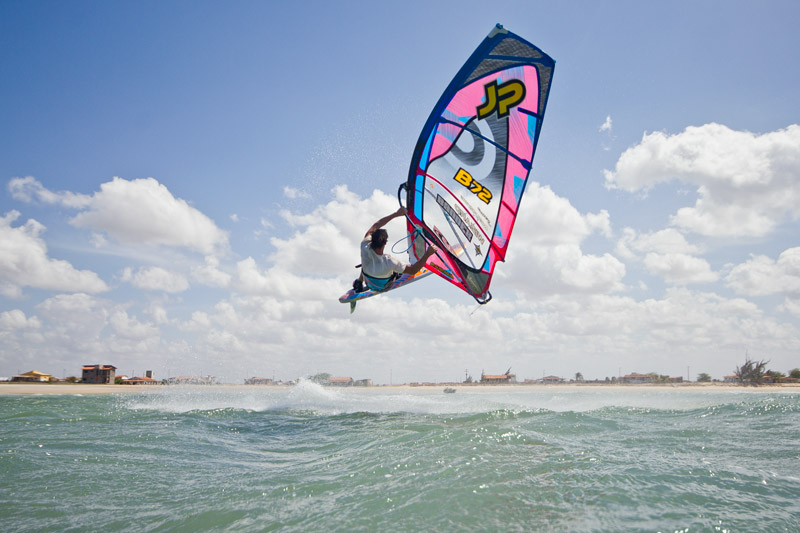 C7: Did you plan the film “Over the sea” already some months ago?

Steven: I wanted to do some filming as we have not many events. In October we decided to make a video with Andraz. Thanks to my sponsor TDR (Bandex) it was possible to realize our first project. Without my sponsor there would be no video.

C7: Why did you choose Sao Miguel do Gostoso as the ideal playground for the film?

Steven: When I was on Maui for the JP/NP photoshoot Kauli Seadi invited me to come to Sao Miguel do Gostoso. In the beginning the plan was to make a trip on Kauli’s boat, but this plan was cancelled as his boat was not ready on time. But I decided to go anyway.

C7: How would you describe the windsurfing conditions at this spot and was it ideal to produce a movie?

Steven: During our 20 days stay we had wind almost everyday. Kauli took us to different spots around Gostoso with his 4×4. We scored some sick conditions and we have seen beautiful places. Maybe for filming it was not always so ideal. Andraz was all the time looking for different angles to capture the moves, instead of just filming from the beach. So sometimes it was frustrating, when you make a sick move while he’s changing his lense or he is filming some chicks. 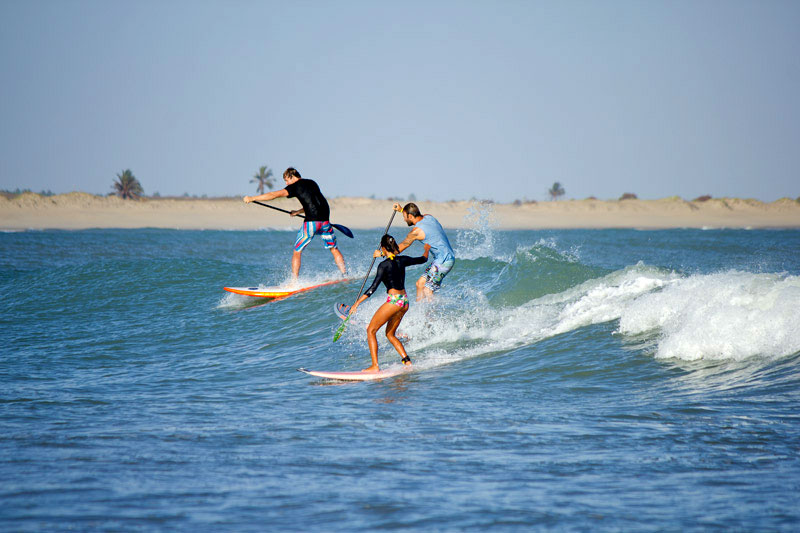 C7: Will there be any other riders in the movie, too?

Steven: It will be only me, I think. But there is a lot of lifestyle in the video and not only action.

C7: You had great moments on the 2012 PWA Freestyle tour, but you were a bit unlucky with the wind conditions? What are your expectations for 2013?

Steven: For sure there were many good moments, but too bad we had only 3 events. I  was unlucky with the wind, but that probably was the same to everyone, This year I’m better prepared, I’m in super good shape and also the same with my equipment. This year we improved the new 106 a lot, which works now amazing in the light wind. We as well worked on the new Wizard, so everything is ready and I’m well prepared for 2013. 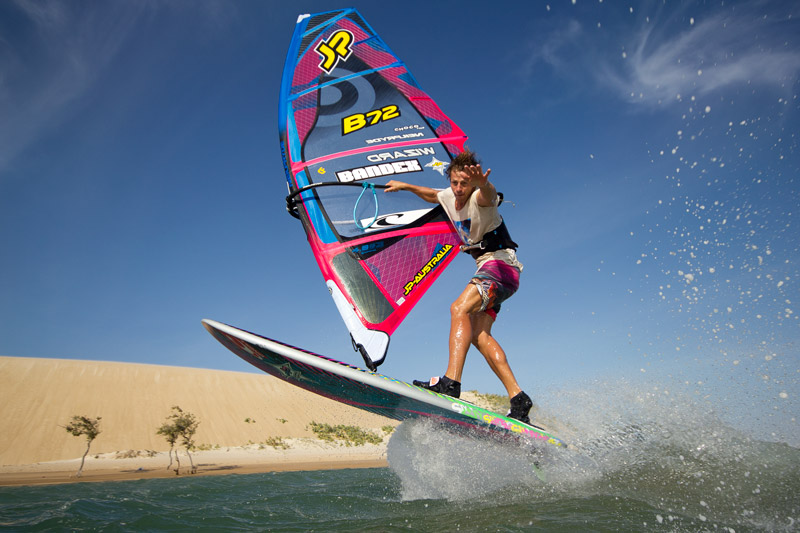 C7: Who will be your hardest opponents?

Steven: All the top riders.

C7: How and where did you prepare for the season?

Steven: I was in South Africa. This place is perfect for training, a lot of variation and not always the easiest conditions. How I train? I try to sail as much as possible and with different conditions, from flat water to choppy conditions, and as well jump a lot and besides that, I go 3 times a week to the gym and on no wind days I go SUPing a lot. Next week I will be in Egypt for training and testing.

Steven: I am always really motivated, but this year a bit more as I feel much better prepared.

C7: Do you see a growth in freestyle windsurfing?

Steven: Yes, freestyle is growing. During the last years the level on flat water was amazing. It’s crazy what we can do nowadays. But now more things are possible in the air, for example freestyle in waves.

C7: Thanks for the interview!

[…] The interview with both camera man and rider about the trip, the planning & preparation of the trip and all the work behind these great action movie is available on continentseven. […]

[…] Interview with Andraz and Steven about the movie   http://www

Altitude windsurfing – Peru
5. December, 2020 by tom from the museum
Aloha, here you can find info about the first (and only maybe) windsurfing crossing of rhe ...