The German slalom sailor Oliver-Tom Schliemann reports from his journey to the 2014 Awaza PWA World Cup in Turkmenistan on the Caspian Sea. And it is a journey into the unknown, a blind spot on the windsurfing spot map, which gets discovered.
They say it is the first international sports event ever hosted in Awaza, Turkmenistan. Awaza is a modern tourism zone and one of the favorite projects of the president of Turkmenistan Gurbanguly Berdimuhamedov. The plan is to build 60 hotels until 2020, even a skiing center and a bike racing center are planned, with a total investment volume of 5 billion US$.  While Turkmenistan remains one of the world’s most repressive and isolated countries, this newly built region should be the window to the world in the future. But until this region will be a flourishing tourism zone a lot of things need to happen and we hope that not only the environmental issues in the Caspian Sea will be solved until then.
Further information:
Human Rights Watch 2014 Report | Freedom of Press Ranking 2014 | Article in Radio Free Europe about the PWA event | Article in Radio Free Europe about Awaza | Ecosystem Caspian Sea | Environmental Issues Caspian Sea | Travel Article about Turkmenistan in the UK Telegraph | “Jennifer Lopez performs in Turkmenistan” by Rolling Stone 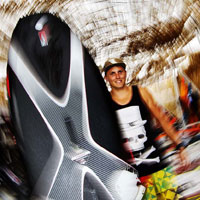 OLIVER-TOM SCHLIEMANN
Sailnummer: G-1001
Oliver-Tom is 23 years old and has won already several Youth World and Vice World Champion titles in different classes (Aloha, Formula, Mistral One Design, etc.). He has been on the PWA tour for some years and at the moment he concentrates, besides studying and working in his father’s windsurfing center in Eckernförde, on organizing his Beginner2Winner Academy for the summer.
Links: Facebook | Beginner2Winner Academy
Text by Oliver-Tom Schliemann
DAY 1 – OPENING

One day before the start of the PWA event in Turkmenistan we had an amazing sand storm going on here. You couldn’t see 50 meters and the wind was blowing with gusts up to 40knots. We had wind all day long but the conditions were so crazy that only a bunch of guys tried it. Today there was the official opening ceremony with the president of Turkmenistan. Hundreds of people were working day and night to make this opening as perfect as possible. The president was planing to come around 11am but the organization didn’t know for sure, so they let everybody wake up at 6:30 so that we were ready, if the president would show up earlier. 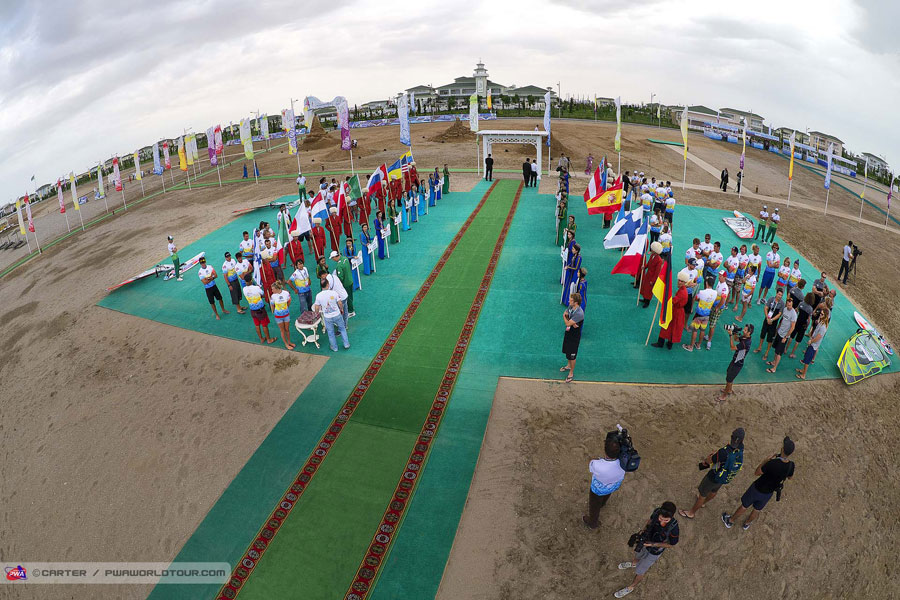 Waiting for the president

Turkmenistan is a small country that is changing with the new president. He is applying new laws for the residents. His key rules are more education, more health and more sport for all. He is preparing the country for the rest of the world. Turkmenistan has one of the largest gas reserves of the world and is looking into a bright future. Half of the population is working for the goverment, so it is easy for the president to control his country. After the arrival of the president there was a show for him, where all sailors had to go to the water and besides there were many other sportmen were presenting their sports like: waterskiing, kitesurfing, wakeboarding, parasailing…

After the opening the rain kicked in and so we went for lunch.

Finally the first skippersmeeting of the event took place with some interesting news. There will be a different heat order, heats with 12 sailors (6 advancing) and giant marks, we are still looking for smaller ones. 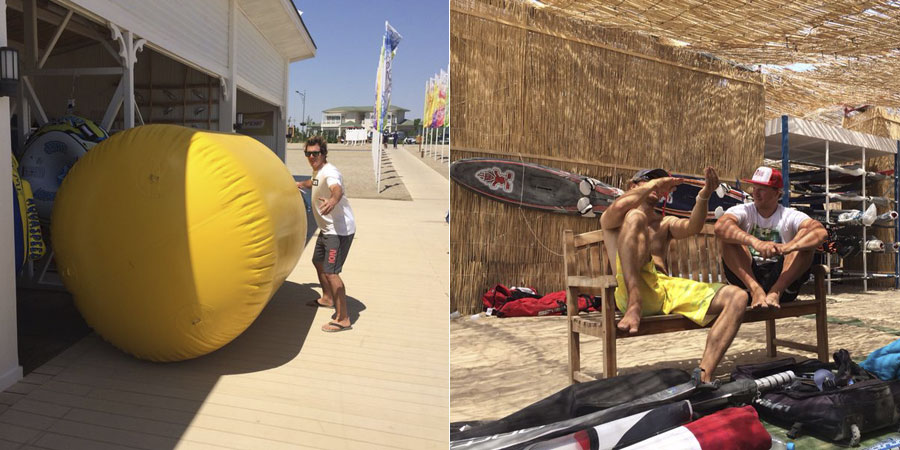 The forecast is not looking so promising for the next days, but in the morning there is always strong wind. So the race director told us that there will probably be skippersmeetings at 5:30 in the morning. Let’s see and wait what happens.

First day of racing. The early bird catches one heat. The forecast looked only good for the morning, so the skippersmeeting was at 6am in the dark. The wind was offshore and pretty gusty, but the crew was so on fire to get an result that they started anyway. First up was the ladies final and we saw a start were many people were not planing over the starting line or later.
After pushing through that women’s heat, the first heat of the men including Björn Dunkerbeck and me was up! Björn wasn’t able to plane to the starting line so he couldn’t even fight for a place in the top 6! The course was very long and the wind was very gusty, so we had an interesting heat with many holes and after beeing in 5th position after the third mark the wind just stopped and me and Moussilmani stopped planing and were not able to pump because there was no wind! The guys from behind got a gust and passed us all.
After a lot of complaining on the beach the heat was valid. After that all other heats were cancelled and then the waiting began. 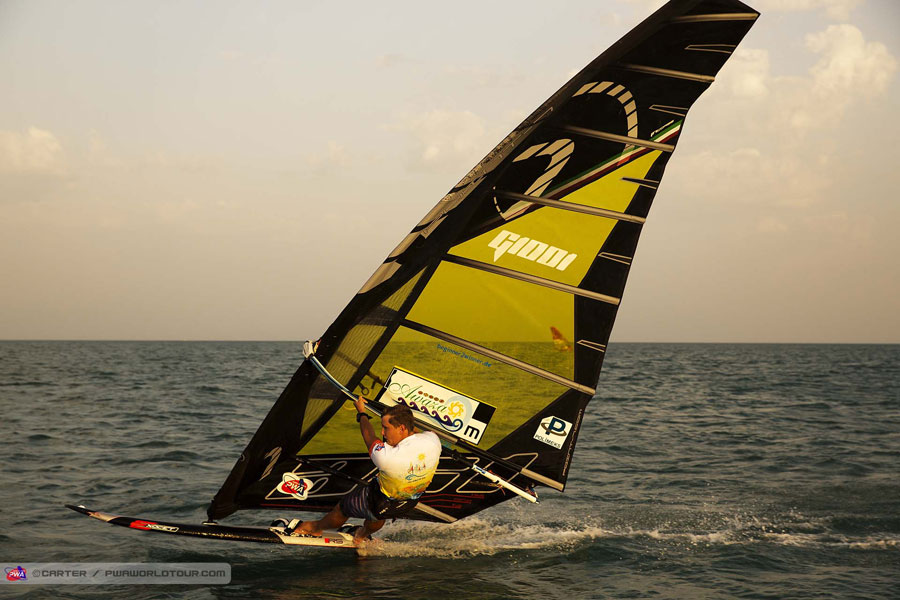 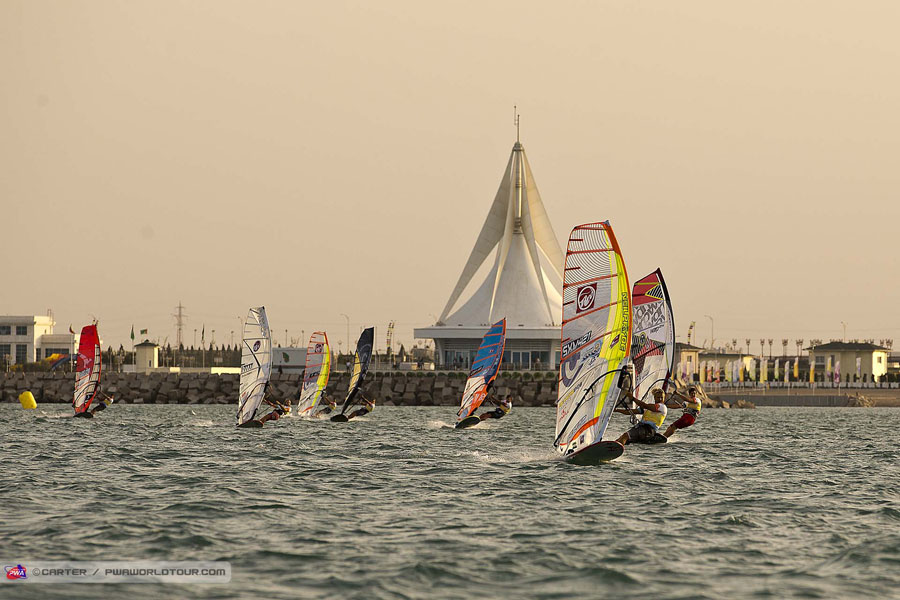 Until 4pm nothing happened and we just burned in the sun. Then the thermic winds came through and it looked like we get some great heats. But the wind was still very light and because of the new wind direction a lot of seaweed came into the course area. So, all competitors pushed hard at the start to get free wind and so it happened what had to happen. In heat 4 Antoine Albeau and Gunnar Asmussen went over early. I just want to mention the French teams, which was flying today, especially Pascal Toselli from the Point7 Team.
Tomorrow again skippersmeeting at 6am, so lets see what we get there. 🙂
Aloha and good night!
OTS

R i do apreciate your moderate tone very much and i too think now that we kind of agree on many points. i always try to raise my voice where i see prejudice, and since you are from a (one that used to be a?)poor country you will know how stupid prejudices are. I must admint i do think you are indeed too idealistic here just as you state it. – PWA goes where the sponsors are, it never has been different. Pros from Canaries organize sponsoring so PWA goes there. PWA would go to Wimbledon if the tennis association… Read more »

You might well be right. It will be interesting to see what will happen in the future.

In the meantime we’ll work on our prejudices

Someone please explain to me, because I really don’t get it… Turkmenistan???? Why??? Is there actually anyone at all in Turkmenistan (besides their president and Yelken Yacht Club apparently) who actually cares about windsurfing? Or can afford it? Or even knows it? Or is it (as it seems to me) that the PWA is finding it increasingly difficult to find other countries (read: countries in which windsurfing is at least known to some part of the population) willing to cough up their high starting fees, and now, in a last ditch attempt, resorts to an entirely unknown (but rich!!) village… Read more »

But something about this (=PWA) doesn’t feel quite right.. => totally agree!!!!!

well, would you also object to PWA wave in Moroccoco/Dahkla? perhaps to the coming event on Cape Verde? There are more Turkmens, who can afford windsurfing, than moroccans and Capeverdians together let alone Vietnamese. That is for certain. Anyone here from Sao Vincente? Kind of similar with Chile, Venezuella (Ever seen Andre’s film about Gollito?), perhaps bonnair and most of the carribean. Turkmenians have Gas, others(except Chile) have fish, and there is less and less fish in the ocean every year. It would be same for MAUI if it was not for all these well off Americans and Europeans settling… Read more »

I agree with most of your arguments, at least partly. But I feel the need to clear up some inaccuracies in your comment. Firstly, I never said that i object to the PWA organizing an event in Turkmenistan. In fact, I’d rather see a fuller PWA event list than an empty one. What I did say is that their decision to organize an event at this location sits unconfortable with me, and that I question their motives to go there. Like i questioned the FIFAs motives to organize a world cup in Qatar for example.. But that aside. I think… Read more »

A couple of inaccuracy s here. #1 Turmenistan is far more represive than Morocco, it’s not even close. In fact normal Turmen are not even allowed into the ‘Yelken Yacht Club’ which has “gates behind it to keep out Turkmenistan’s citizens” see here http://www.rferl.org/content/turkmenistan-hosting-windsurfing-world-cup-event/25286610.html #2 I have no idea how anyone can compare the government of Turkmenistan, which is a dictatorship with completely fraudulent elections, to Chile or Venezuela, unless you are just trolling. Despite your claims Since December 2006, “under the Government of President Gurbanguly Berdimuhamedow, no significant improvements regarding human rights and civil liberty have been observed by… Read more »