On the third day of the 2015 Aloha Classicat Hookipa – it’s a combo event of the AWT and the PWA finals – the action was on again. And it was big! Huge northwesterly swell and relatively light wind caused a lot of crashes and even more gear on the rocks. Duncan Coombs started with the ladies, but got just one heat (heat 9) completed with Daida Moreno and Sal local Vicky Abbott advancing in the top 8 of the single elimination. Heat 10 saw a few big sets coming through plus dropping wind. Nayra Alonso got rescued by the jet ski and Sarah-Quita Offringa, to, after she got ripped down by a huge avalanche of white water. All her gear got smashed on the rocks. Heat 10 of the girls got cancelled and Duncan started the men double. The double saw a few early upsets in the first round. Philip Köster and Jaeger Stone, both are actually ranked in the top 3 overall. 10 heats of the double elimination got completed, 16 – 17 heats are still missing. Kai Lenny, who just made it from Jaws to Ho’okipa for his heat impressed us a lot. With great timing and control and full rail turns he made it into the third round same as Bernd Roediger, who gets used better and better to his new gear – he switched from Goya to Naish just before the event started. The Cabezo Locals Alex Mussolini and Dany Bruch put a good show on the water and are in round 3, too. Youngbloods Marc Pare and Federico Morisio made a great job at their first event at Ho’okipa and are qualified for round 2. Congrats! The conditions on day 4 should be great again. Let’s see, if the double will be done and we know the final winner in the men’s category. Watch the video of day3. Kai “Flycatcher” Katchadourian tells you all about the highlights of day 3. 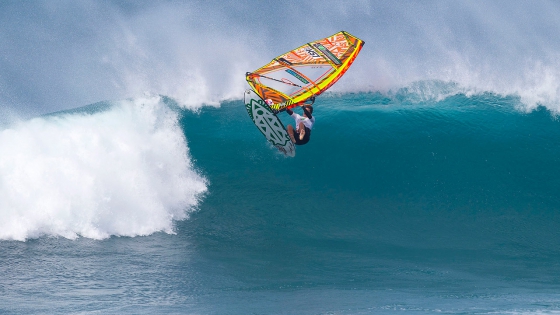