Ho’okipa delivered again on day 5, but the wind was lighter. The waves were still clean and in good order, but much smaller. We would call them fun waves compared to what Ho’okipa got during the first 4 days. The wind was up and down, too and didn’t fill in all the time as the waves were breaking closer to the shore. It was youth and ladies day and they gave their best to put a good show on the water. In the end it was Iballa Moreno, who won in front of Ingrid Larouche, Sarah Hauser and Vickey Abbot.

The women’s fleet were made to wait a little to run their single elimination final again while the trade winds took a little longer to build on day 5. Over the course of the late morning and early afternoon the wind fluctuated with the overhead cloud, which led to the women’s final being completed in tricky conditions. 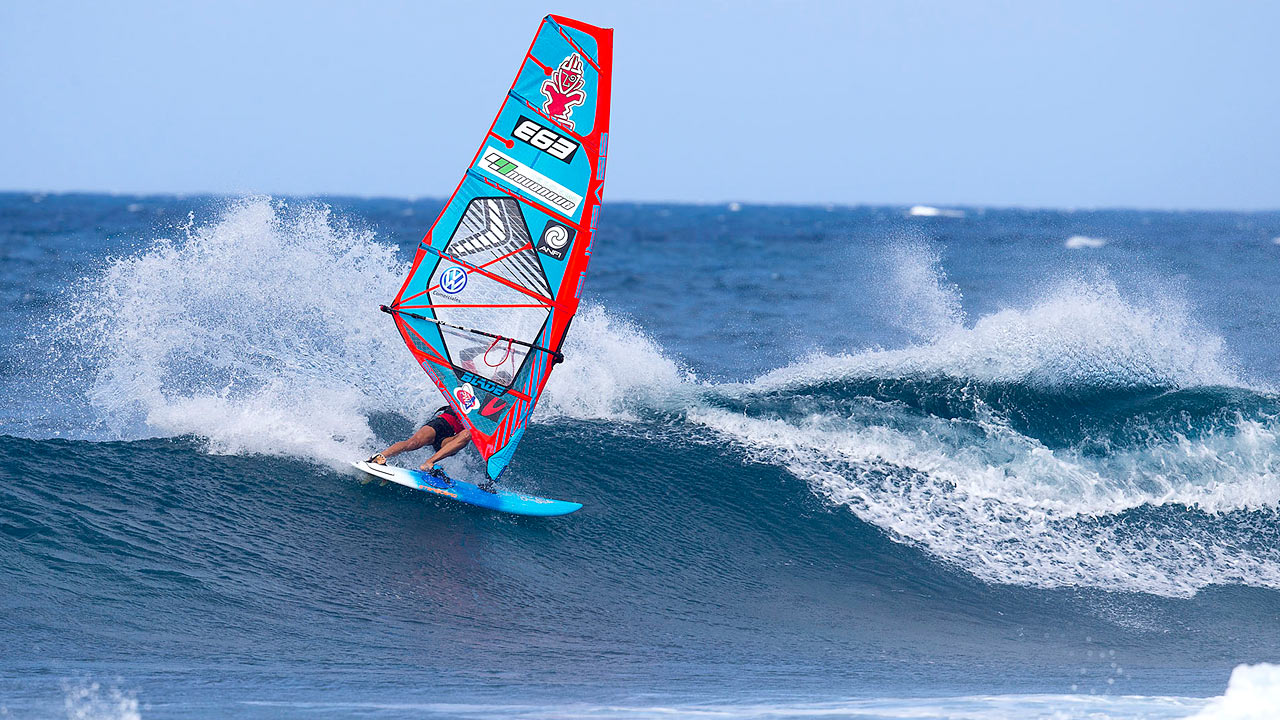 The Women’s Winners’ Final needed three attempts to get competed, but the reigning champion Iballa Moreno made the most of the tricky conditions by showing patience to wait for the best waves before combining several well timed turns with an aerial to be crowned the winner of the single elimination. Victory in the single means Iballa is now on the verge of claiming a famous hat-trick of prestigious Aloha Classics – having won here in 2006 and in 2014. 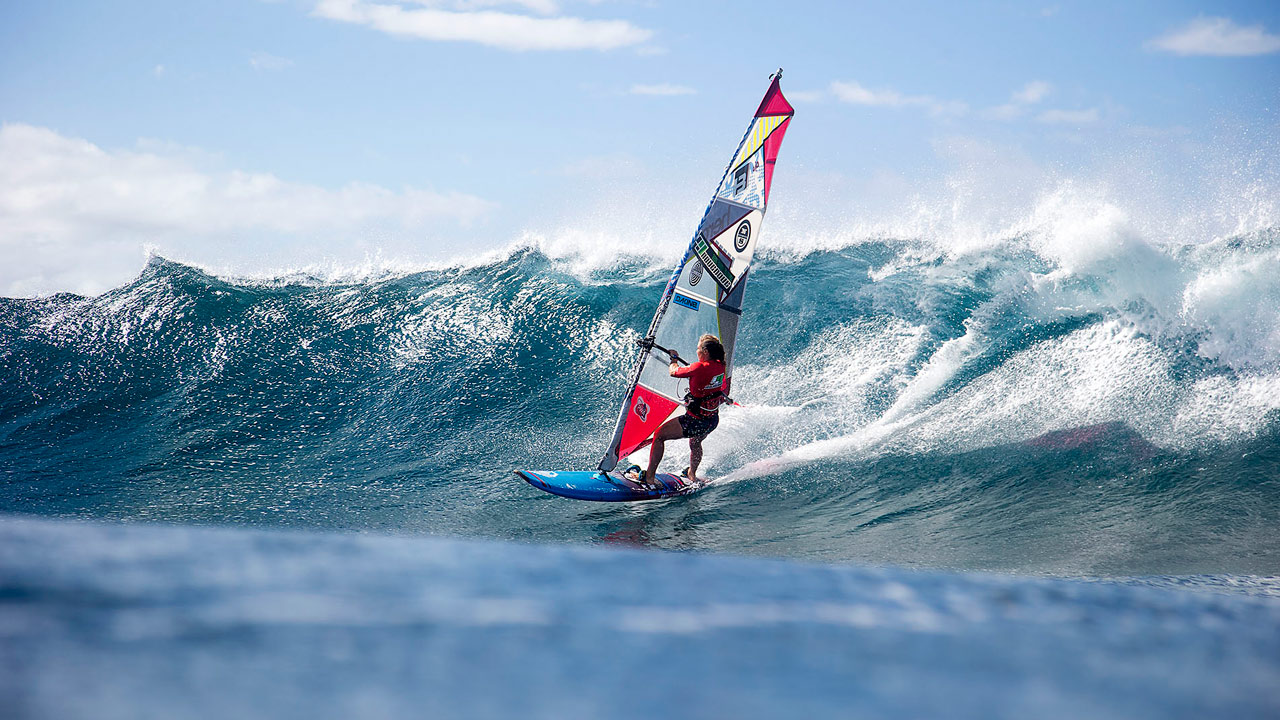 Meanwhile, Ingrid Larouche sailed through the pain barrier having injured her foot the day before to secure an excellent second place, ahead of Sarah Hauser — who completes the podium after achieving her best result ever — and Vickey Abbot in fourth place. 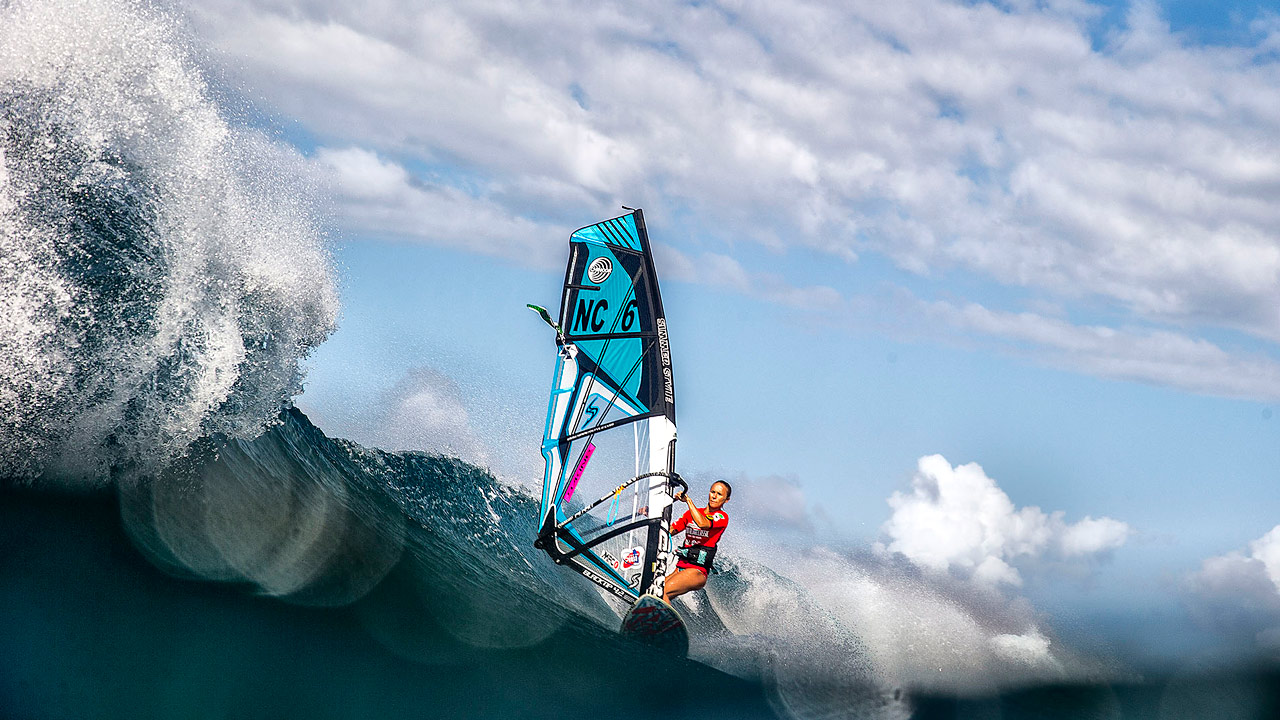 Iballa Moreno on winning the single elimination: “I’m honestly not looking into the world title points at all. I’m more focused on winning the event here, which I think this is one of my favourite events — This is my favourite tack particularly for wave riding and I really enjoy sailing here. I’m only focusing on doing well here and whatever with the title race happens. Of course if it goes in my favour I would be happy, but Daida still has a very good chance and I’d also be really happy for her if she gets it

. Last year was my year, maybe this year is her year, who knows? It’s all in her hands and I hope she can comeback through the double.” 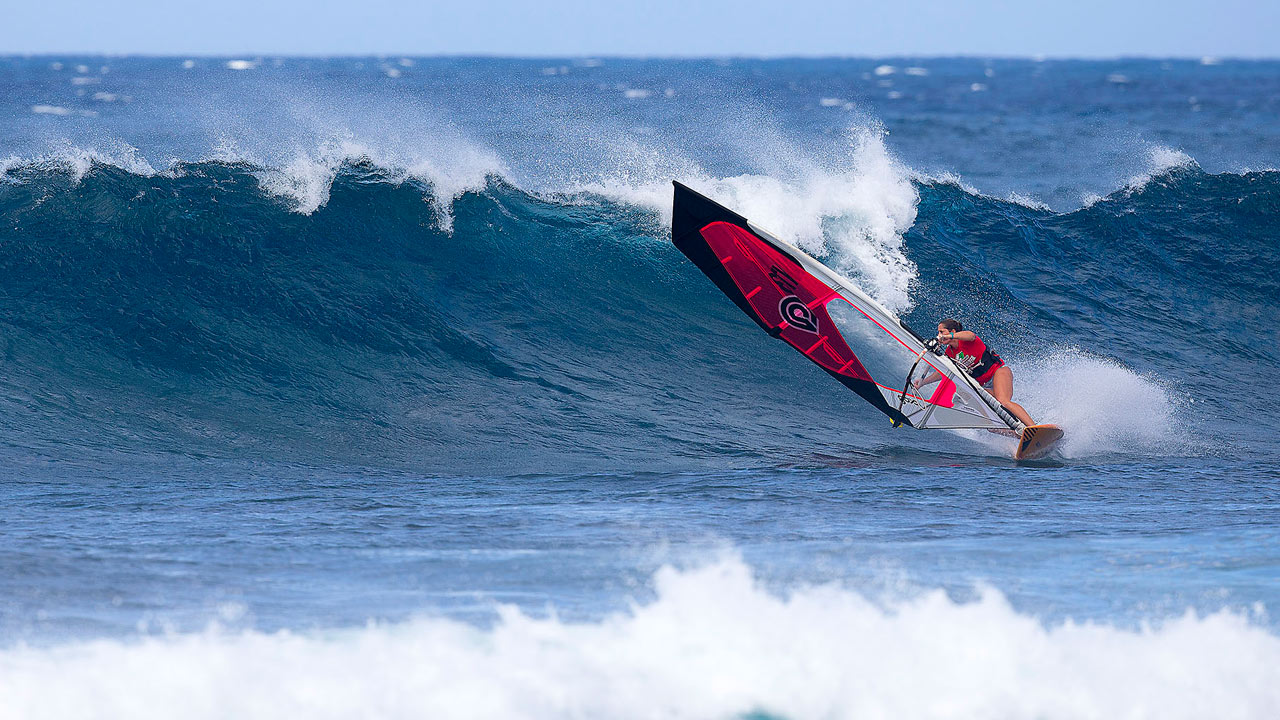 As things currently stand Iballa leads the title race, but things are still in Daida’s hands. If Daida is able to fight her way back from 7th into 3rd place then Iballa will be powerless to stop her sister from regaining her world title. The forecast for tomorrow sees the swell drop further, so a lay day has been called for all fleets. The forecast predicts a new long period, together with wind, for the end of the week, so an announcement will be made at 7pm each evening with the latest call as the race director monitors the forecast.

The youth generation got their chance as well showing the best possible wave rides. Tom Juban, Jake Schettewi, Takara Ishii and Daiki Itoh made it into the final. Jake is also in his way to win the 2015 Youth AWT overall title.

As the wind filled in by noon the first heats of the day got the youth bracket underway.  It was good to see the kids getting a chance to rip it up at Ho’okipa Beach Park.  10 kids had signed up and the first heat had Tom Juban, brother of Camille, Max Schettewi, second in the Youth division and third in the Amateur for the entire 2015 AWT season, Willie Daniel, our youngest competitor, and Itoh Daiki traveling from Japan. Juban and Max Schettewi were sailing well, both with nice Aerials. Itoh Daiki was consistently getting waves to advance in first place along with Juban. The second heat had Jake Schettewi, Max’s younger brother who is first in the youth and amateur divisions in the AWT, Morisio, from Italy, Sugi, from Japan, Jules Forli traveling from Guadalupe with the Juban clan and Takara Ishii, also from Japan. Jake Schettewi sailed well as per usual, throwing big off the lip aerials inducing applause from the crowd. Advancing in second place was Forli. 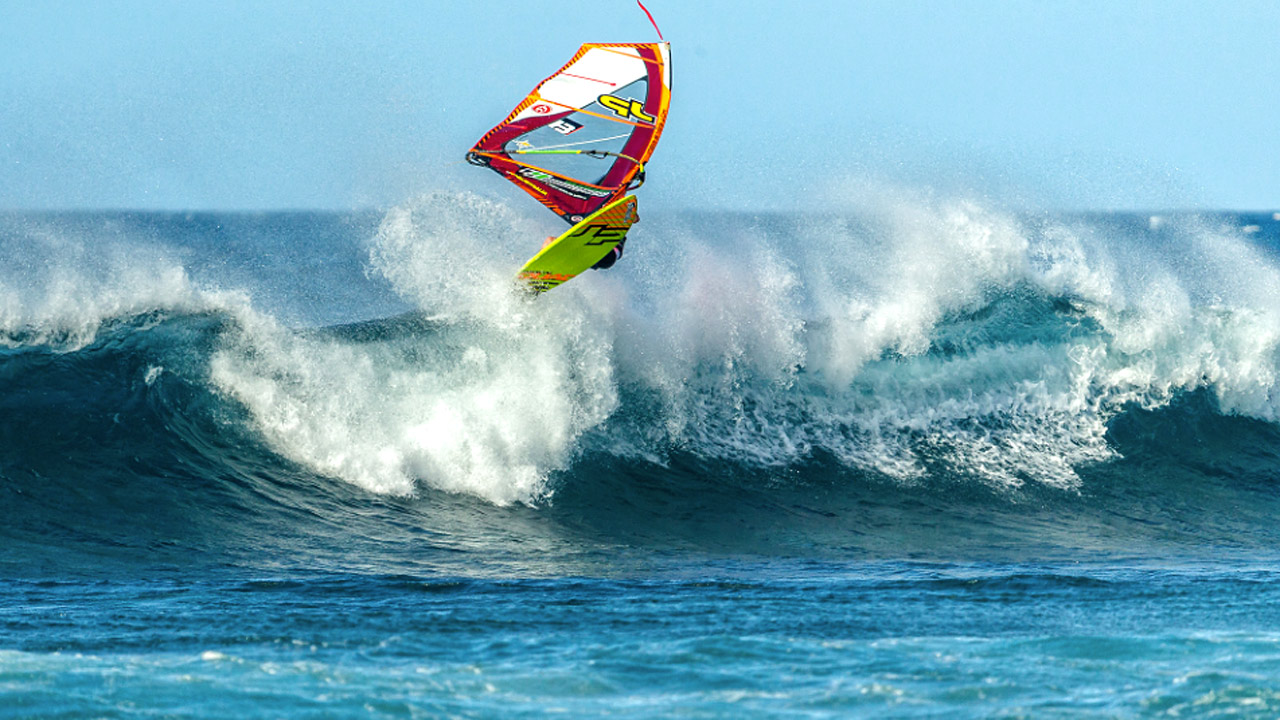 Heat 3 gave the losers from the first round a chance to advance.  With strong sailing from all the competitors in tough light, offshore wind, Morisio and Ishi advanced to the next round.  Round’s 4 and 5 had three sailors each with the top two advancing to the final.  Again, light winds made it imperative to make wise wave choices. The Japanese sailors sailed impressively with Daiki Itoh and Takara Ishii taking out Jules Forli to advance. Heat 5 saw more strong sailing from Jake Schettewi as well as Tom Juban to advance over Federico Morisio.

The final was put out on the water after a quick break with an extra 5 minutes added to the heat length in order to give the riders a better shot in the continually dropping wind. After about a third of the heat head judge, Duncan Coombs, made the call to postpone the final in order to give the groms the conditions they deserve. 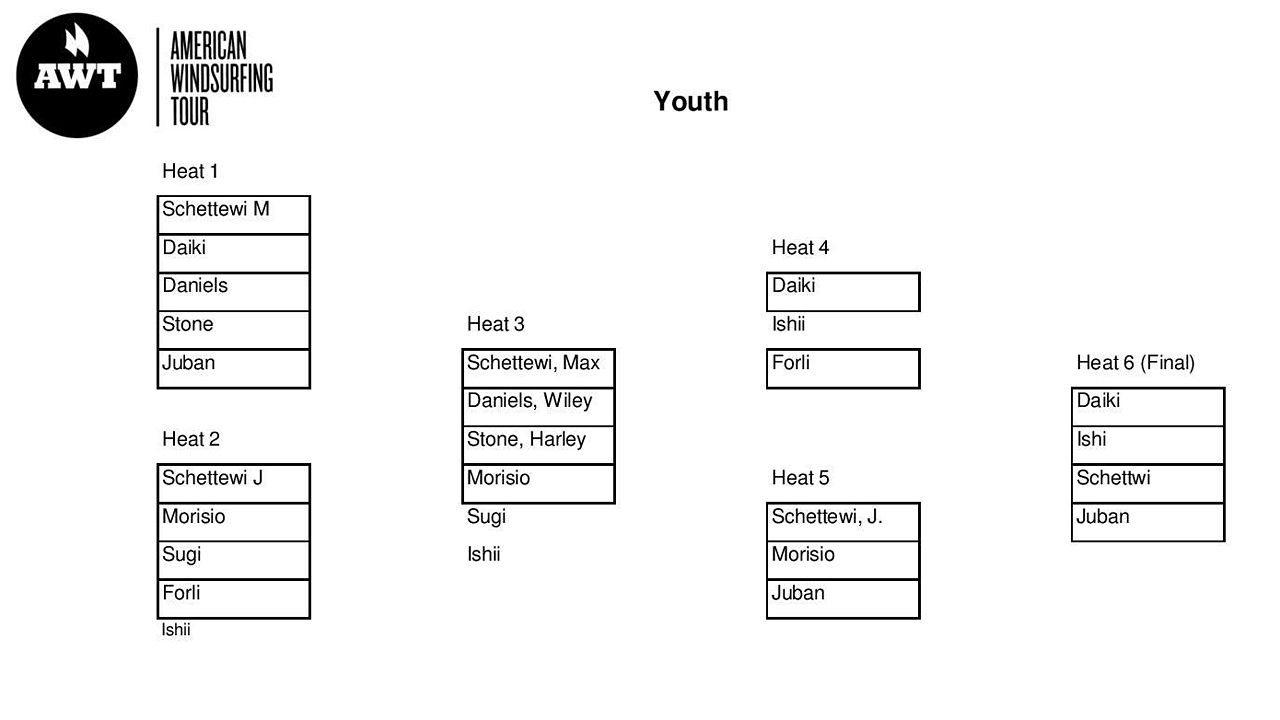