No Rules in PWA Slalom Racing

Polish pro racer Maciek Rutkowski produced an exciting movie about the no rules Slalom racing on the PWA tour. Since it got introduced in 2007 a lot of hard crashes happened. Most of the time, when you crash, you lose. You lose in the ranking, you break gear or you lose price money. Maciek suffered a hard crash at Fuerteventura 2015 and now shows in his movie, what happened exactly and shows a lot of other wild situations on the race course plus statements from a few riders and judges. Discussions about a card system are on, but it’s the question, if a system like that would take excitement away from the speed oriented discipline. Too many regulations can kill the sport and most of the riders, who go hard are some of the best riders on tour.

A film about no Rules slalom racing by Maciek Rutkowski 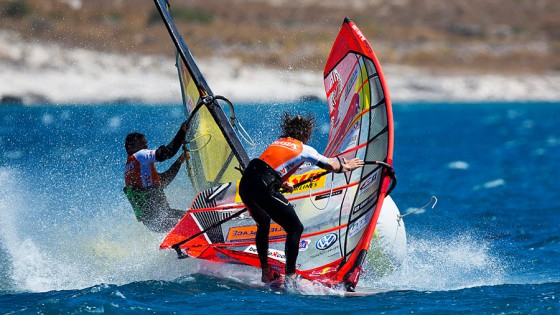 No Rules in PWA Slalom Racing

A statement by Maciek Rutkowski about his movie “no Rules”

“These days I find it harder and harder to find valuable stuff out there in terms of online clips, magazines, or even movies. Maybe its just me getting old and picky, but less and less I finish watching something and am like: “I wanna watch it again at some point”. Seems like everyone is just chasing clicks, reaches and box-office result. And I understand that, business is business.

Don’t get me wrong I still watch the new blockbuster superhero movies were after 70minutes of fighting and 25minutes of talking-that-leads-to-fighting, good defeats evil. But more and more I find myself thinking that I just wasted 2 hours when the credits start rolling.

And that’s how I “discovered” documentaries. Real people telling real stories. Giving real opinions about real events. Somehow I can relate to that a little bit more and nowadays some of my favourite films are documentaries. So for a long while now I’ve been willing to do some sort of windsurfing documentary-ish thing myself. Didn’t have a clew what the subject might be, but this year in Fuerte the subject hit me (literally!). At first I just wanted to post the livestream recording of the crash in good quality. But then in Tenerife I asked Proffitt, Franky and Sparky to give me a quick introduction to the no rules thing and things started falling into place really naturally. And after 2 days of editing we might just have the best video I’ve ever made. Or at least the realest one (def realer then the SA: Vengeance one haha!). The problem is now I will want to tell a story every clip, so quite likely you’ll never see anything of me ever again hahaha! So enjoy that! :)”

if you´re serious ben, i dont get you…

great video. had no idea how the slalom world works. if you wanna do something on a regular base i would really appreciate if you would do little clips on every event in this style. slalom doesnt get much attention (in my eyes its a bit boring to watch,sorry) but i really liked that video! keep it up. cheers

Continentseven.com is no More what is was… arrogant People and only Want BIG names.. poor

I want rules! I want windsurfing and no wrestling! I know something about it…. because I´m the Bear and I have rules in my forest! 🙂