Nicole Boronat rides the big ones

Nicole Boronat, born in Paris, started her professional sports career with a national title in skateboarding at the age of 16. With 24 she packed her bags together with her boyfriend Stephane Etienne, who was at that time already a professional windsurfer, to travel to Tarifa and live there. “It was the skateboarding who brought me to surfing and after to windsurfing and then Stand up paddling,” Nicole views on her sports career. “When I was at school, I always wanted to skate, to be with my friends in the skatepark. I was feeling I was part of a mixture between sport, art, culture, music… a new era.”

Nicole won several windsurfing national titles, World Cup Indoor podiums, was in the Wave Worldcup ranked in the top 5, got a top ten place in the Biarritz longboard festival and 2010 a podium in the European Championship in Stand Up Paddle. “When you are in the sea, we have freedom,”says Nicole and is happy to pass these feelings to other people, through her activities in the ocean.

Now she is living on Fuerteventura, together with Stephane Etienne and last Tuesday Puertito, a spot next to Cotillo on Fuerteventura was breaking. Nicole went for a “Chicas only” session, challenging the “diabolo slab” and getting the righ set-up for the upcoming Fuerteventura Wave Classic event in March. Below you can read a little interview with Nicole about this session at Puertito and when she will sail Jaws. 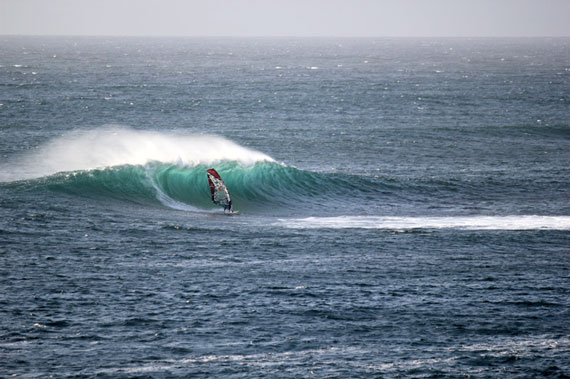 C7: How was your latest session at Puertito?
Nicole: I started the session around 4 pm with the tide going down from the rocks, a bit up wind Puertito. My sail choice was the Steel Gun 4,5 and my Naish wave board. Puertito is a challenging wave all the time, but you want to ride it..don´t ask me why.. I have been sailing that wave around 10 times only, because “she” is not “working” often. Most of the time she´s just too gnarly ..

C7: How many waves did you catch that day?
Nicole: Normally you don´t catch a lot of waves. On that day I got maybe 8 to 10 waves but only two were good. Puertito is a little rough and you have to take the right set wave on the right place to not eat the dry reef, it s a slab …

C7: Are you not scared in such waves?
Nicole: I´m all the time nervous before sailing that spot but when I feel it, I go. If I don´t feel it, I don´t go. Anyway I approach the spot slowly, it´s tricky out there.

C7: What is the most important to take care of at Puertito?
Nicole: Don´t go if the local boogies surfers are there and to chose the right wave. 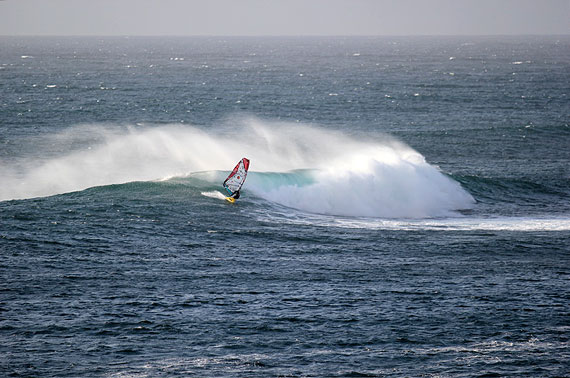 C7: Do you have three tips for girls, they want to start windsurfing in waves?
Nicole: Go for it, go for it, and go for it…lol. Everybody knows that you have to go step by step and spend time in the ocean. As well watertime is very important to get experience. But with passion and dedication you learn something every day, no matter the conditions.

C7: And what about sailing in Jaws?  Did you already think about it?
Nicole: It would be nice, but as I´ve told you, you have to take time and get used to the place, with people who know the spot and can give you the right tips and take care of you for safety. But why not, when it´s small. I´m sure, I will stay on the shoulder..ha , ha , ha.. Anyway, the days I go in the water, when it´s a little bit bigger than usual, it´s because I feel it, somes days  I am not in that mood then I don´t go…In bigger surf it´s different, you have to be confident,  concentrate a lot, be aware and on top of that, doing this for yourself.

C7: Thanks for the interview and good luck for sailing Jaws 😉