French freestyle windsurfer Nicolas Akgazciyan wins the Surf Worldcup Podersdorf in Austria in front of Normen Günzlein, who could only plane once in the final. Normen advanced against a non appearing favourite Kevin Mevissen (the flying Dutchman was still chilling in his room). The second superstar, Andre Paskowski, 2006 EFPT tour winner, went up in the semi final, too, winning against Remko de Weerd (who could only show two Willy Skipper and one Flaka in the light wind conditions) but lost the heat against Normen.

The competition was sailed a bit more outside at the lake, in still questionable windcondtions. Rossmeier was not planing in his heat. The french trickser Akgazciyan – sailing with 6,3 sail: “The windconditions were really difficult. I could only show easy moves like Eslider.” 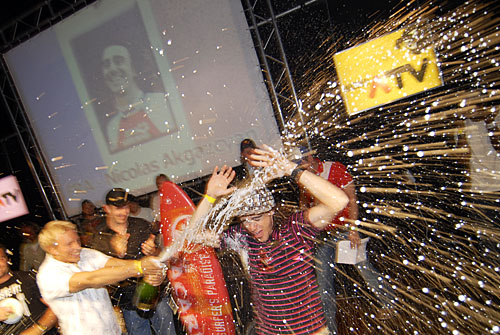 During the whole contest the riders had to struggle with the extraordinary big and long windholes. Normen Günzlein, one of the topfavourites, described the situation as following: „It was super tough. In one of my heats I could not plan while the last 1.5 minutes. But I had luck and did advance.“

Da Mike, EFPT manager, explained: „One might say that this place has its own rules. About 7 heats had to be cancelled and repeated to get a clear result. Riders went out with a right sail size and found themselves either over or underpowered a few minutes later. Dropping and rising winds were testing the nerves of riders and judges in equal amounts. The guys had to focus and keep an eye on their opponents much more than on any other place, and it seems like exactly this situation gave the local guys a pretty big advantage.“

One highlight of the event was for sure the ramp in the lake. Kevin Mevissen for example went up the ramp with full speed, landed some sweet forwards, added an one-footed Forward and started to get crazy trying doubleforward loops.

Unfortunately the windconditions made it not possible to continue with a Double Elimination on the next day. But the organizers scheduled a “Supersession” for the afternoon.
In the beginning the Supersession was not a real super session, until Tom Hartmann and Daniel Bikich adjusted the ramp to the wind direction. Then the session started.
Following riders were hitting the ramp: Kevin Mevissen, Tom Hartmann, Daniel Bikich, Baptiste Beer, Remko de Weerd, Fabio Calo, Matteo Guazzoni, Chris Sammer, Tine Slabe, Andrea Rosati, Alex Seyss, Nicolas Akgazciyan, Federico la Croce, Michael Rossmeier and Andreas Olandersson. The riders were waiting for a gust, then planing, a few pumps and “up in the air” (or not). 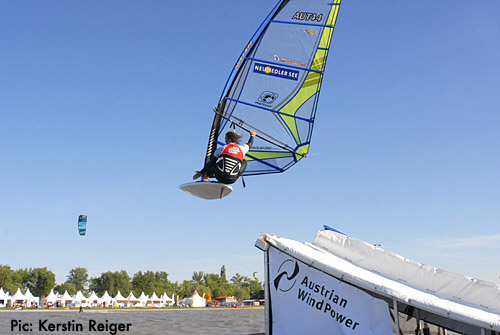