“When Mark called me, I instantly said yes to participating!

Not only is Mark one of the finest photographers I know, it’s also always connected with lots of laughs and joy to work and hang out with him!” (Lars Petersen)

Mark Wengler is a Danish photographer and artist, who lives in Hellerup, which is located outside of the center of Copenhagen in Denmark. He used to be a passionate windsurfer but a terrible accident changed his life complety and he was not able to windsurf anymore.

“I was hit from behind by a drunken truck driver. Everything I loved so much was gone in a split second and suddenly I couldn’t follow my biggest passion in life any longer, windsurfing and the lifestyle surrounding this magical sport, had become history.” (Mark Wengler)

Although the the summer is just around the corner, we will have a last look back on an ice cold project by Mark and Danish windsurfer Lars Petersen. 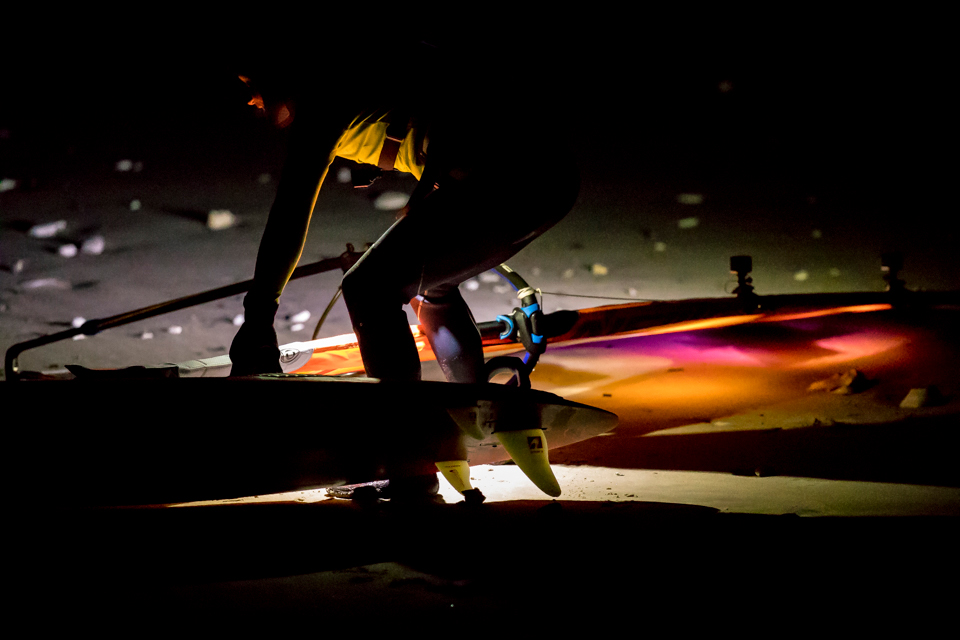 Continentseven: Mark, please introduce yourself a little bit?
Mark Wengler: I’m located in Denmark and ever since I was a little kid, I’ve been a pure ocean freak, all I really cared about, was “the motion of the ocean”.  I used to be a VERY passionate windsurfer and snowboarder, but then I was involved in a serious traffic accident, which changed my life dramatically (broke my neck). I was hit from behind by a drunken truck driver. Everything I loved so much was gone in a split second and suddenly I couldn’t follow my biggest passion in life any longer, windsurfing and the lifestyle surrounding this magical sport, had become history. It was a though and pretty dark period in my life, but somehow I needed a wakeup call, because today it’s become very clear to me, that I was on a wrong path in life in so many ways. I was simply focusing on too much bullshit for all the wrong reasons. I had somehow forgotten to enjoy the simple things in life, like watching a sunset or spending time with loved ones. All that changed after my traffic accident – somehow I had a serious wakeup call.

So after a couple of years “covered in self-pity and pain”, I realized that I had to move on in life. I then decided to buy a camera. Photography instantly caught my interest. Capturing these magical moments in life, really appealed to me, and of course windsurfing and ocean lifestyle in general, became my main photographic focus.

Continentseven: Last winter you captured some beautiful pictures in the dark using little lights. Please tell us more about this photography project with Danish windsurfer Lars Petersen.
Mark Wengler:  Over the years I have developed a passion for a more creative and different photographic approach. It’s a fun and really rewarding process, which begins with a crazy idea. So when I stumbled over these powerful and waterproof Lume Cubes, I started imagine how it would look on a windsurfer. I went online, found Lume Cube and bought a couple of these small and powerful cubes, called my old friend Lars Petersen, who’s always up for a challenge. Lars was instantly interested in this project. So we decided that it had to be a though and raw photo shoot, which means it had to be done during the dark and cold winter season up North, in Klitmøller. We then followed the weather forecast for a couple of weeks, and after a while, every thing came together. I really like the winter season up North in Denmark, it is so raw and authentic. The North Sea during the winter season, can be a real bitch, trust me. And from a photographic perspective these conditions really suits me well. 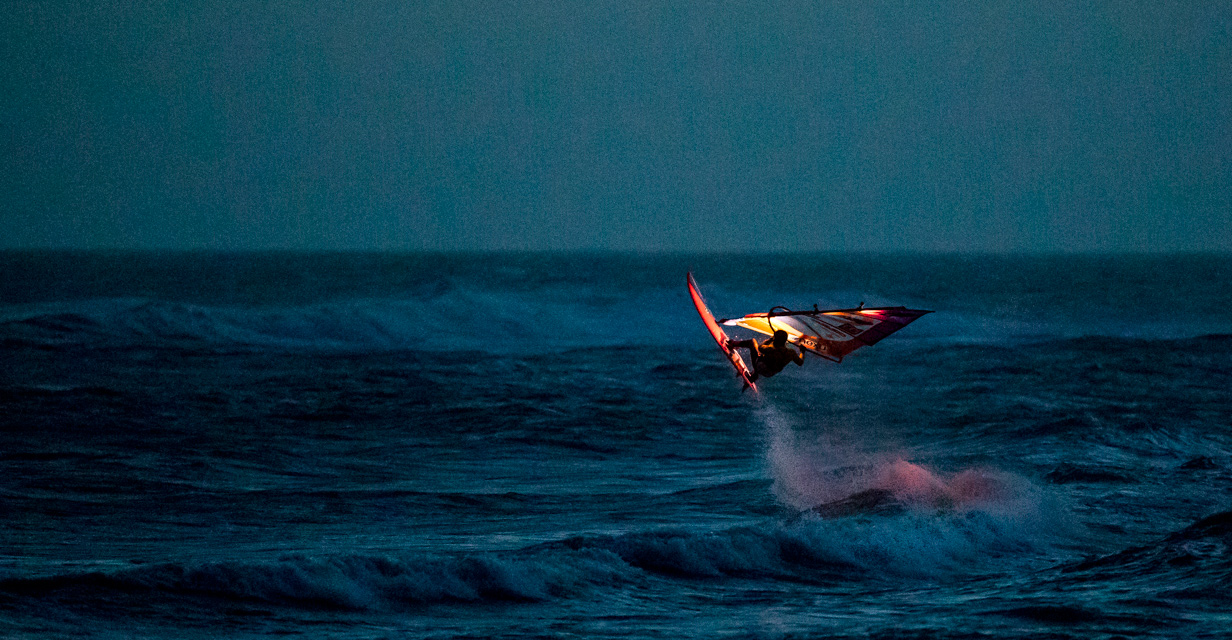 Continentseven: Where did your inspiration for this shoot come from?
Mark Wengler:  I was inspired by kitesurfer Nick Jacobsen, with whom I shot some pictures of with these cubes mounted on his board. But his colorful kite was way above him, and I felt something was missing. It had to be testet on a windsurfer, with the colorful sail as a contrast to the dark surroundings. I had a feeling it would look pretty cool.

Continentseven: Did you shoot in the morning or evening and was it really dark?
Mark Wengler:  Yes it was dark. We shot it all during a couple of days. First we tried very early in the morning, starting up at 4 o’clock. Temperature were close to zero, and we mounted everything pretty quick. I remember we could hear the waves, but not see them, which was a pretty strange feeling, especially for Lars, who was going out in these dark winter conditions. We also shot during the evening, which worked much better, since we moved from light into darkness. It gave us much more time. In the morning we were under a time pressure because of the rapid increasing morning light, moving in from the east.

“It wasn’t an easy photo shoot, but we used some time to prepare well. Things like how to mount the cubes to my equipment and checking where the photographic outcome worked best, was a bit of a challenge. Plus the sailing was very different. I was virtually sailing in the dark at times, and although the cubes gave a lot of light, then all of sudden there would be a dark patch where you couldn’t tell what was going on.  So there were some sketchy crashes!” (Lars Petersen) 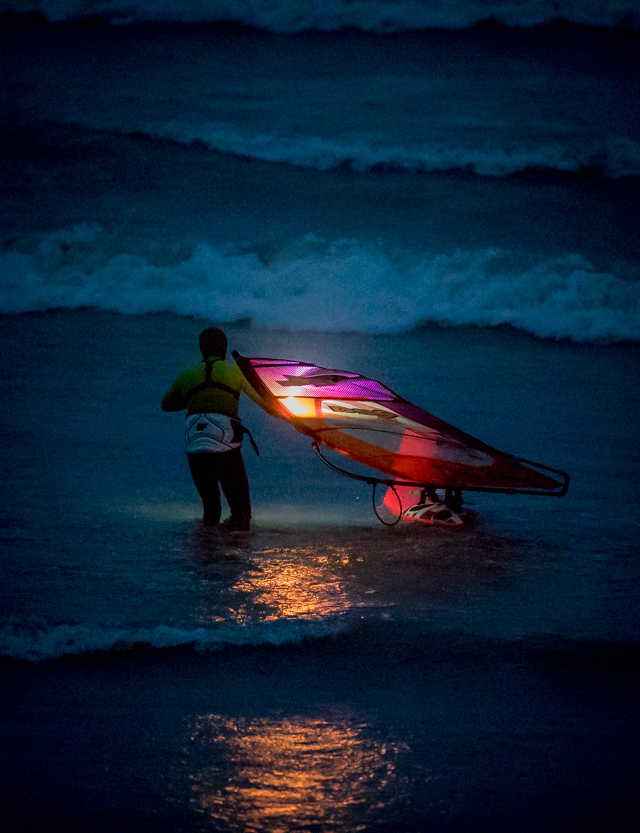 Continentseven: Were the lights strong enough and did you have any safety back up in case Lars would lose the gear or the lights?
Mark Wengler:  These cubes are strong little bastards. They each have 9 levels of light, which can be controlled on your smart phone. We used 3 cubes in every shoot and they were all mounted with Go Pro parts. But because of the cold temperatures, the plastic parts became very fragile and broke a couple of times. Luckily Lars managed to grab the first cube, which broke of, while it was sinking into the deep, so that became a serious lesson. We then attached a little leach to each of them, and it worked perfectly. We learnt a couple of things, and next time I will definitely make some changes. But that is somehow also the beauty of such a project, it “provokes your comfort zone”, which I really like.

Continentseven: Are you satisfied with the result?
Mark Wengler:  We shot it all during 3 days…and nights. Tried all kind of stuff with the settings and cubes, and it wasn’t an easy shoot. But overall I’m satisfied with the end result of this first test.

Continentseven: Did you film some action, too?
Mark Wengler:  No – unfortunately it wasn’t my first priority, since this was a test, but next time I will definitely shoot some video as well.

Continentseven: How was it to work with Lars?
Mark Wengler: Lars and I go way back and it’s always a pleasure shooting with Lars since his approach is very professional. Besides that, we always have a great time together with lot’s of laughs and fun. Lars also knows what it’s all about, since he runs his own video production company, when he isn’t out ripping it, at some of his local spots, of course. When it comes to knowledge about cold water windsurfing, then Lars is definitely the one to talk to, besides that Lars knows every little secret spot up there in “Cold Hawaii” like the back off his hand.

Continentseven: Did you struggle with the cold winter weather on the beach?
Mark Wengler:  No, not at all. I have bought a so called “Thyborøn Habitt” in the local fishing stores up in Hanstholm, which is basically a waterproof full body suit. So I’m totally covered from all kinds of weather conditions, and I always use an Aquatech cover for my camera gear as well. It’s actually a pretty cool feeling, being warm and all covered up, while I’m surrounded by gail force winds and heavy rain.

Continentseven: Do you have any further projects in the planning?
Mark Wengler:  Ohh yes – I have several things up my sleeve. When it gets a bit warmer, I have made some plans with a couple of super talented skateboarders, it’s gonna be a very different photographic experience, because as a contrast to shooting windsurfing, skateboarding happens right in you face. No need for long lenses and heavy tripods.

But besides my normal photography, I have lately been working on my “Board Spirit Project” – which is a different and much more artistic approach to my photography.  I have a huge “crush” on all kinds of boards” so over the years I have shot a wide range of boards (fx. surf, SUP, skate, kite, windsurfing) from some of the interesting profiles, I have meet. It is people like Kevin Pritchard, Garret McNamaras, Andrew Cotton, Tony Hawk, Nick Jacobsen etc. 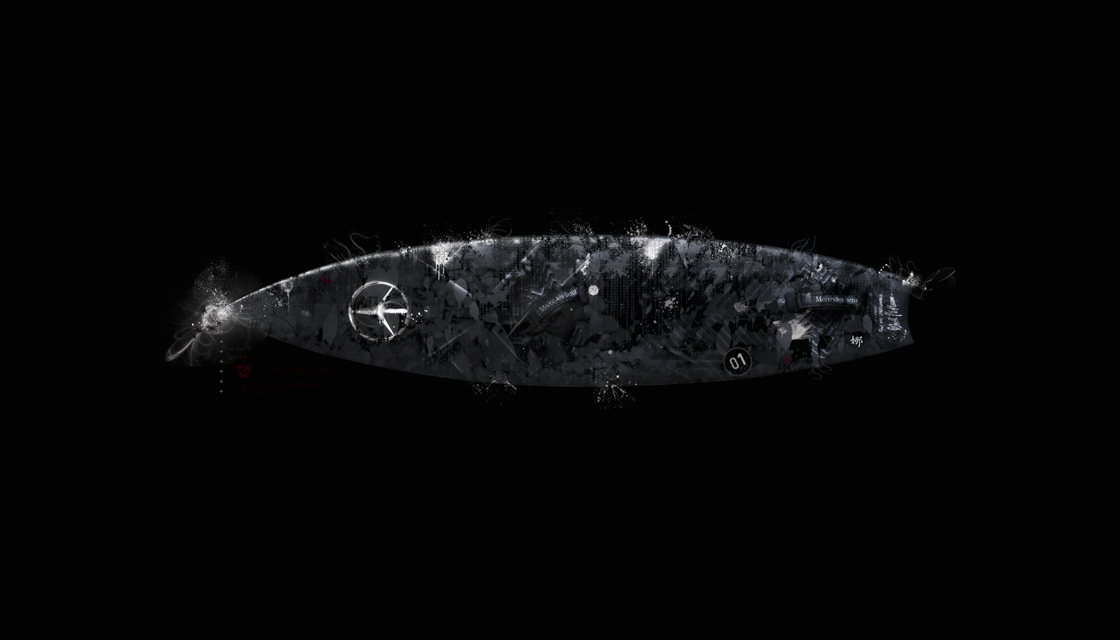 Board Spirit Project by Mark Wengler

To me every board gets its own unique spirit, generated by all the action and ocean power these board are exposed to, by their riders. It all started just for fun one night down in Nazare. I couldn’t sleep because of heavy noise from a huge swell hitting the shore, so I started playing around in Photoshop with some pics I shot of Garret’s Mercedes boards. After creating a few of these “Board Spirits”, I showed them to a couple of friends. Their response was really positive and today some of my “Board Spirits” are hanging in a gallery in Copenhagen….life is full of surprises.

I never stop learning, that’s what make photography so fascinating and endless There will always be new angles to test, new motives and different light conditions to play around with.

Continentseven: Thanks for the interview and good luck with all your project!