Interview with Manu Bouvet about the Easter Island trip

Manu Bouvet and Carine Camboulives, windsurfing globetrotters, travelled with their two kids Lou and Shadé to the Easter Island aka Rapa Nui in May 2015. They released a video and we asked Manu Bouvet a few questions about this exciting journey to this exposed island. Imagine, the distance to the Chilean coast is almost 3500 km and to Tahiti 4250 km. The island, which was once covered with huge palm trees is nowadays sparsely vegetated and was originated from 70 vulcanoes. The island has an extraordinary attraction: the Moais, huge statues carved out of tuff from the slopes of the Rano Raraku vulcano. When Polynesian people settled on Easter Island they created this tuff statues. The biggest were almost 10 meter high and scientists numbered 887 different ones.

Continentseven: How long did you stay on the island?
Manu Bouvet: We went to Rapa Nui in May 2015 while we were staying in Chile for 7 months during a house exchange with a Chilean family, fans of windsurfing! We stayed for a month there at Easter Island. 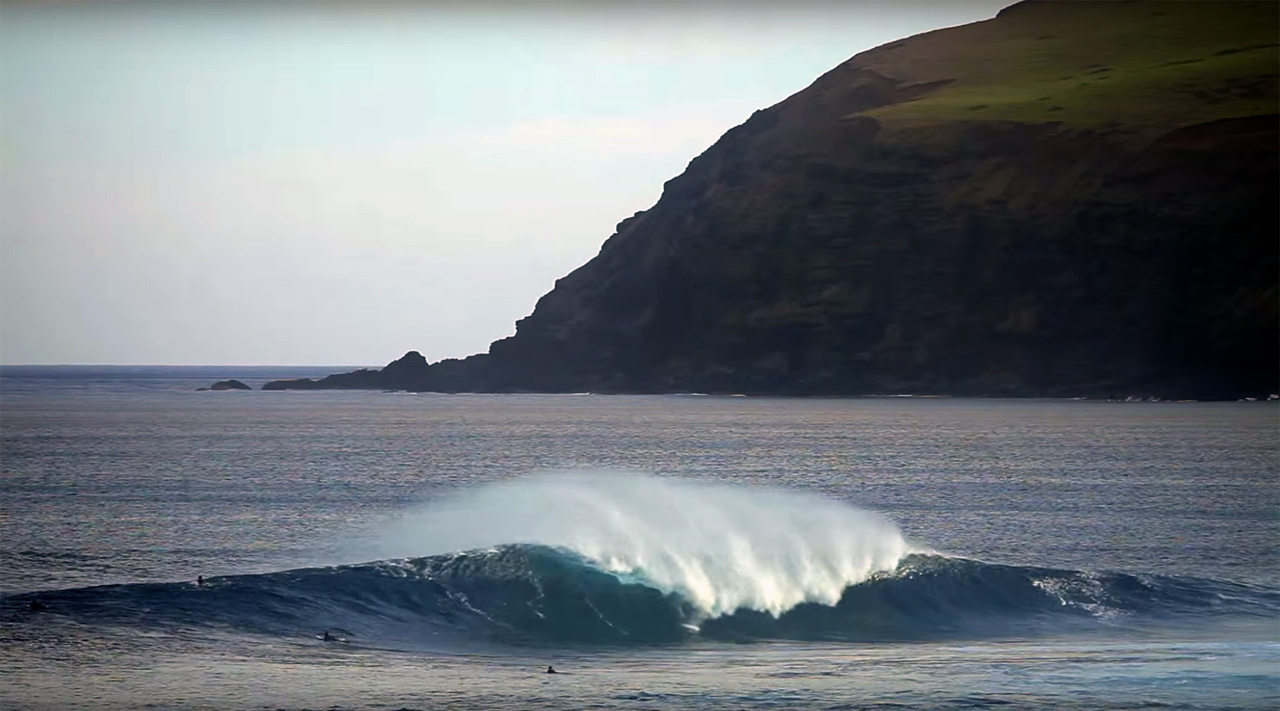 Continentseven: Was it your first trip to this extremely remote island?
Manu Bouvet: Yes, it was our first time there. We had that destination in mind for a long time, but it was hard to organize. Staying in Chile made it easier! Rapa Nui is much smaller than Maui, probably 1/5 in size with 5000 inhabitants only. Just a few roads are existing. Most of the island is off-limits area and inhabited. It has a very low key atmosphere and mellow life-style where the Polynesian culture is very alive. Few cars, lots of horses, the ever present Mana (life force in Polynesia) and the wild ocean makes for a strong “close to nature” experience. 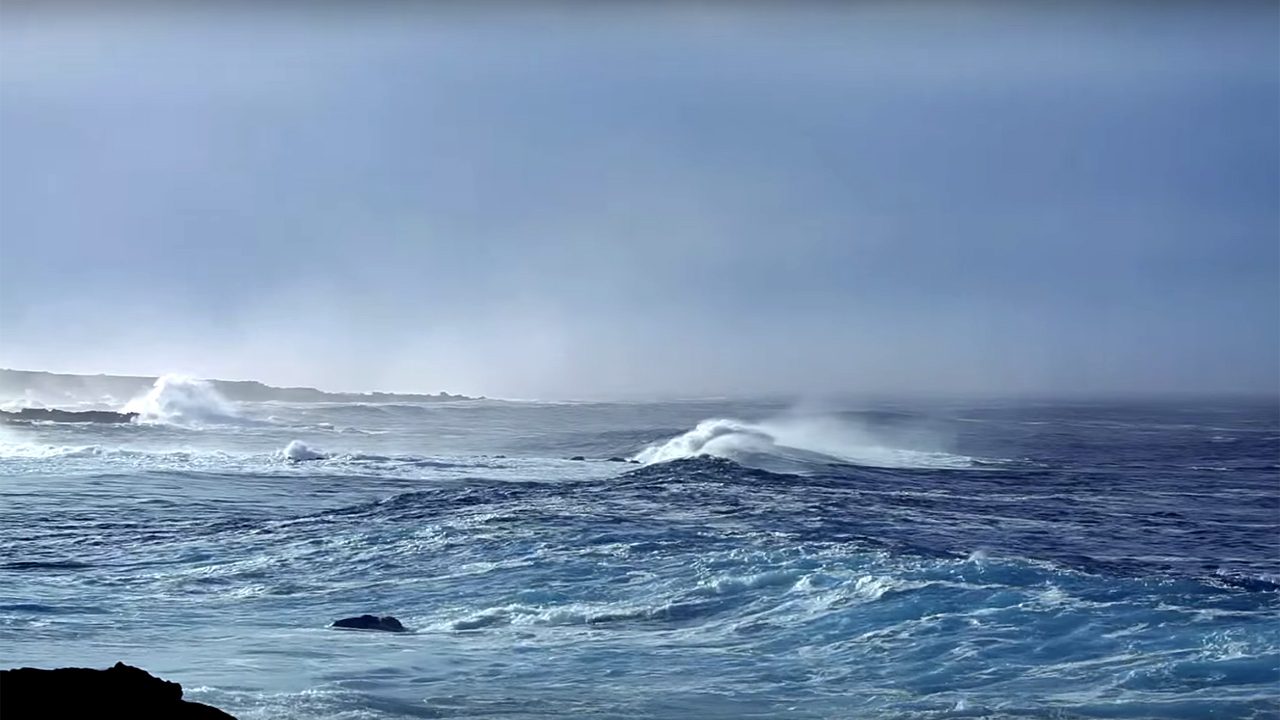 Continentseven:  How would you describe the windsurfing conditions?
Manu Bouvet: There is lots of wind on Rapa Nui, glassy days are rare. There are only 2 sandy beaches on the island what makes launching hard. The wave sailing can be great and is dangerous because the waves are powerful, often big (Laird Hamilton took several trips there, thinking he could score as big as Jaws) and the rocky shores and cliffs make an emergency exit really tricky. That’s what happened to me in the Hotu-iti-Bay behind the 15 Moai at Ahu Tongariki. I got caught inside after riding a medium sized wave. Then a bigger set washed me in. I had to let my equipment go because the lava rocks covered with sea urchins were waiting for me. I had to swim 40 minutes around the peak to make it back in on the other side of the bay where it’s more protected from the waves. My board and rigg were destroyed, but I never felt such a strong Mana in the water. Looking at those statues while dropping into the waves is something I won’t forget. Carine had some great free ride sessions though. 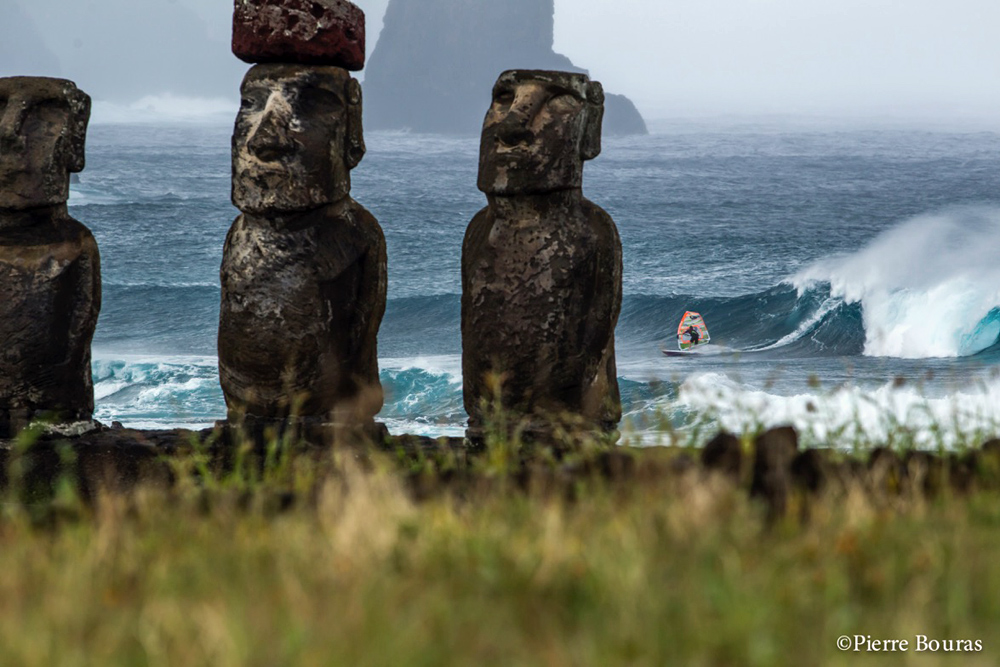 Continentseven: You made some research on the beaches together with your kids and local kids. Isn’t that the perfect way to educate young children, confronting them with the real life?
Manu Bouvet: We have been traveling the world with our daughters since they were born, thanks to our windsurfing trips. It is an amazing opportunity they have to be confronted with what the world actually is. The best and the worst of it. We want them to see it with their own eyes, not on TV (what we don’t have). Most of the time reality is beyond fiction so we don’t need to watch the “show” that the news has become on TV. In that particular case (Ocean plastic pollution) that one experience on the beach with Race for Water has changed forever the way I look at a beach. I experienced that at the age of 43, my daughters did the same when they were 3 and 9. They’re way ahead of me. It’s great in a way on the one hand, but very sad on the other hand, because when I was at their age there wasn’t such a pollution. 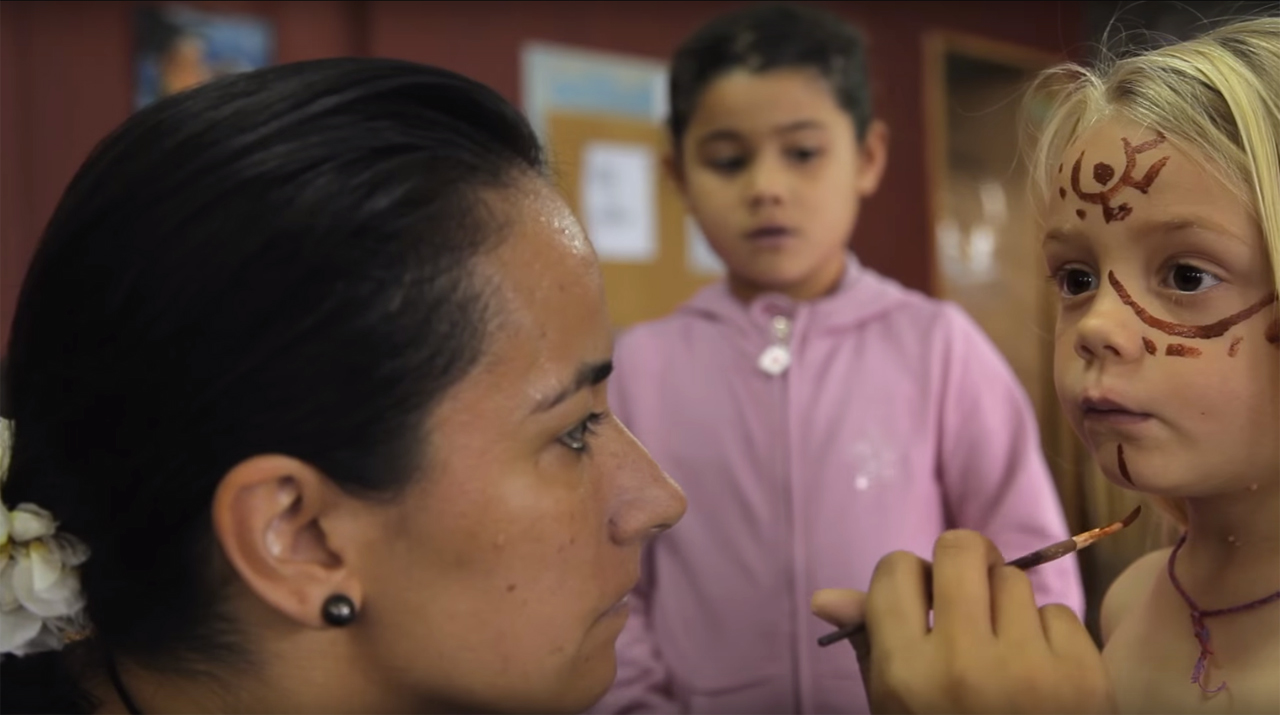 Traditional culture for the kids. Shadé enjoys it.

Continentseven: Will you return to the island?
Manu Bouvet: It’s always hard to tell if we’ll be back. We are like all other travelers. We often say “we’ll come back”. Sometimes we do, most of the time we don’t because we want to see something new…and the media also. But Rapa Nui is a very special place, a stepping stone in a traveller’s life because of the mystery it holds, the beauty of its waves and the kindness and proudness of its people. 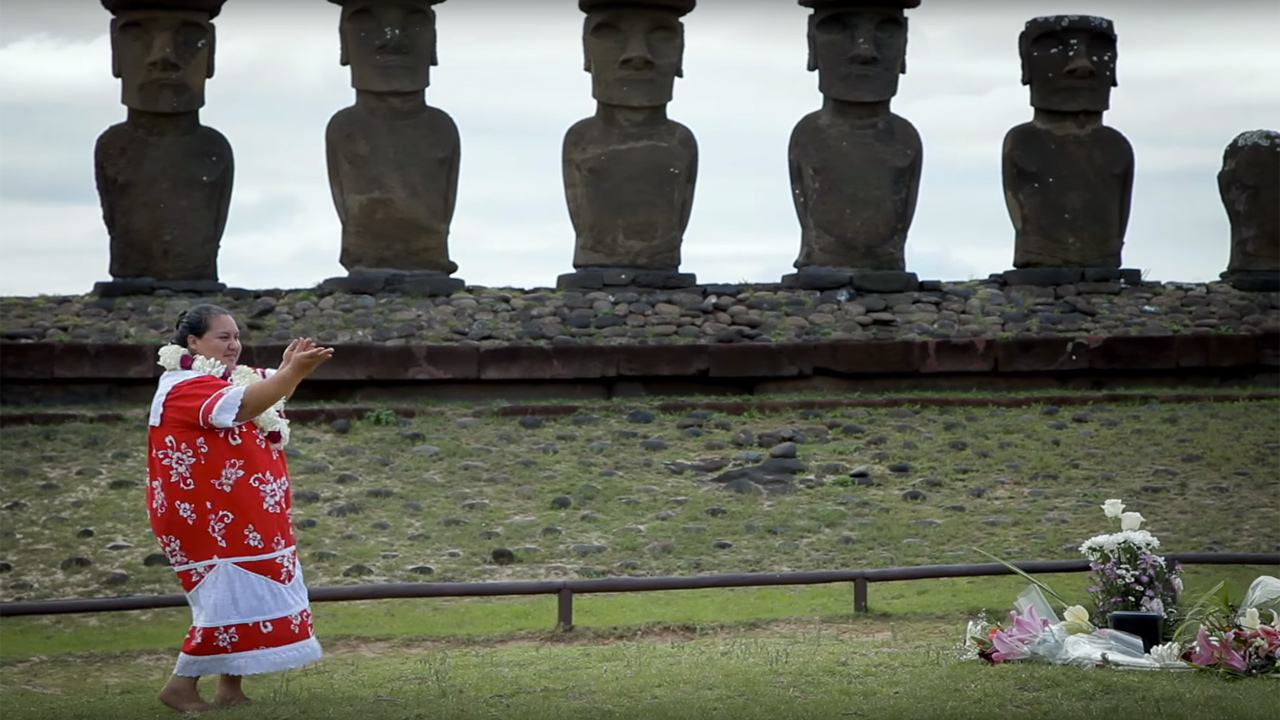 The Mana on Rapa Nui 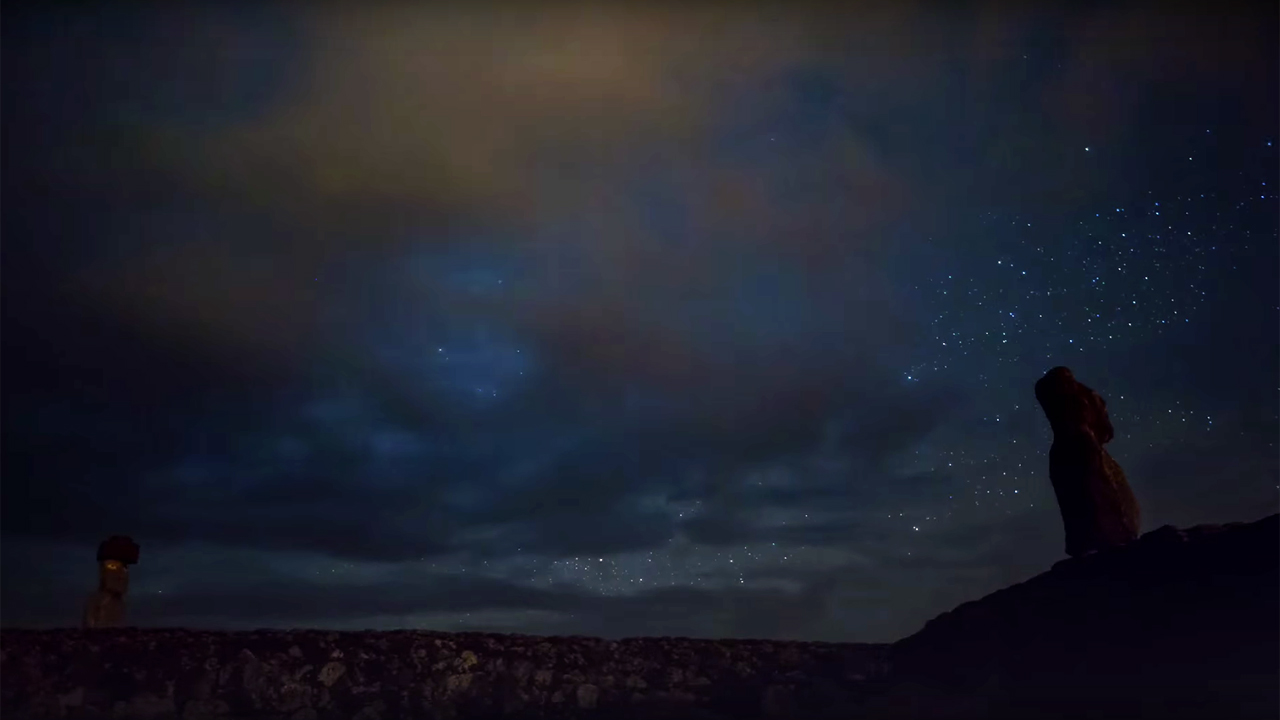 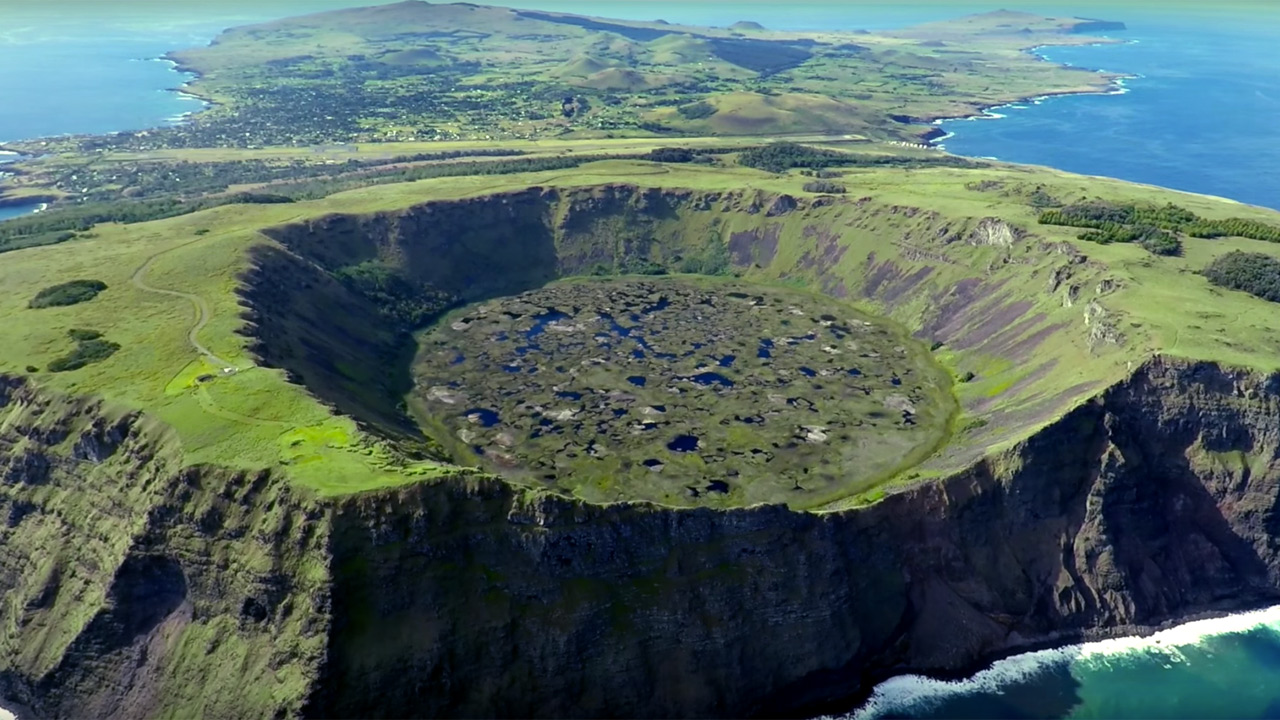 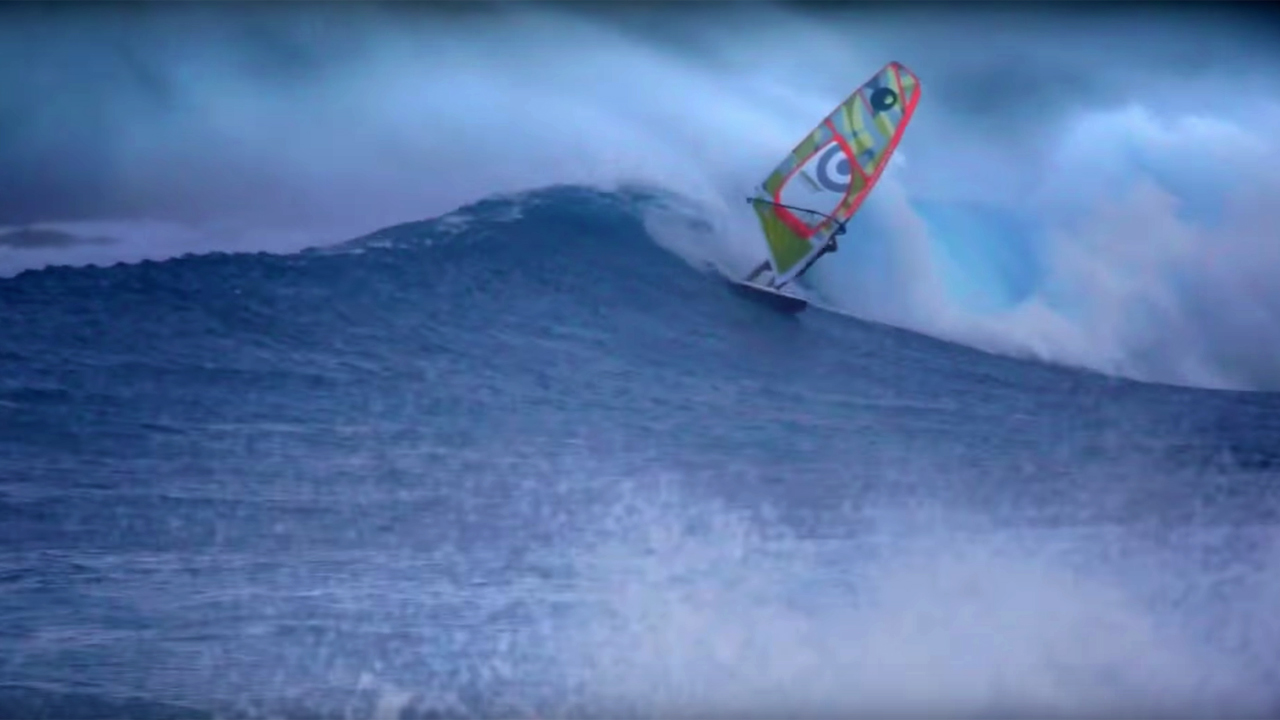 Manu’s radical wave ride at the Hotu-iti-Bay, in front of Ahu Tongariki and the 15 Moais

Carine Camboulives & Manu Bouvet travelled with their two kids to the Easter Island and they produced a video documentary, called “The Rapa Nui Experience”, which tells their adventure to one of the most isolated land on earth, Rapa Nui. Video by Theo Reynal. Make sure to watch the video.