Aylin Lena Erdil (Tur-33) is a 24 year-old windsurfing addict born in Izmir, Turkey. Her family moved to Germany when she was 2 years old and Lena lived in Germany until 10 years of age and finished primary school there.

Spending her summer vacations in Çesme every year, Lena Erdil was taught windsurfing by her father. In 2005, she became the Turkish junior champion, has been competing on the PWA Slalom tour since 2008,  has a Bachelor degree in Politics and Philosophy from the University of Sussex and speaks 4 languages. Big companies like Red Bull Turkey, Roxy or Turkish airlines have seen her potential and have been sponsoring her for many years.
In 2012 she was able to finish the PWA Slalom tour on the podium in third scored the second fastest time on the 500m run with 45,74 knots at the speed event in Lüderitz, Namibia. And besides being a professional sailor she is running the Lena Erdil windsurfing center at Ortakent beach in Bodrum.

We have caught up with the Turkish Slalom lady, who had a busy winter and who has plans to compete in the PWA wave tour soon. At the moment Lena is competing at the PWA Slalom event in Alacati, where she will try everything to make it on the podium.

Lena rotates through a Back loop – Pic: Simon Hayhurst

Continentseven: Lena, you had a busy winter with speed sailing and almost getting the world record at Luderitz, exploring waves at Cape Town and redesigning your windsurfing center in Turkey! Tell us a bit more!

Lena Erdil: Yeah my last winter has been super fun so far. Namibia was a great experience and thanks to Patrik Diethelm I also learned a lot about fine tuning, as on our days off that is pretty much all we would do. After Namibia I stayed in Cape Town wave sailing for a month and then went back to Turkey for almost 4 weeks, but as the PWA event in Vietnam got cancelled and I had such a good time there I decided to go back to Cape Town for another month with slalom and wave stuff. Cape Town has been good to us with consistent winds, waves and warmth. I also had a great time with old and new friends from all over the world. When I returned from South Africa finally in spring I pimped my windsurfing center. I took it over from my father, who actually works full time in Istanbul and all the new gear from Patrik, Starboard and Loftsails arrived for the summer season.

C7: Will you stop racing now after you have started with wave sailing?

Lena Erdil: No, I love racing, the tension at the start and the intensity of the slalom races would be hard to replace! Going full speed down the line and into the jibe while fighting to gain positions at the marks is much more fun than you would imagine!

C7: Speed sailing and wave sailing are two new things for you. How was it blasting on a 4 meter wide channel with the strongest and tallest windsurfers in the world or jumping in the waves of Cape Town, where sharks swim around and one single wave can break all your gear in one second?

Lena Erdil: Speed sailing was a little bit scary at the beginning as I had no idea what to expect and I had never done it before and the channel was really quite narrow, but after the first couple of runs down the “kanal” I adapted quickly my technique and I have to say that it gets really very addictive. Every run you just want to go faster and faster and you are chasing the magic gust that will blow you all the way down at record speed. As for the waves in Cape Town, thinking about it makes me realize that I must have a very addictive personality. It’s similar to the speed addiction in Namibia I find it really hard to stop wave sailing until I’m absolutely shattered, trying to go higher and more radical on every wave… And when you’re having fun you forget about the sharks… 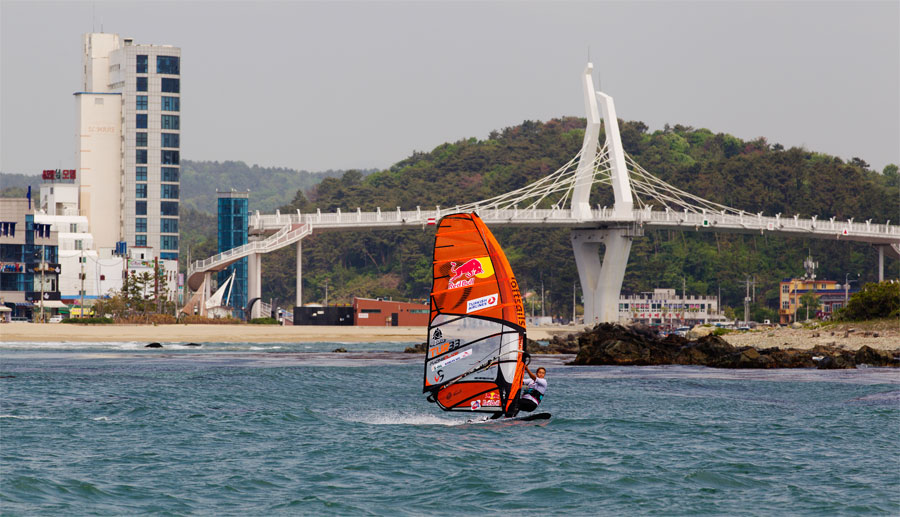 C7: How long have you been sailing in waves?

Lena Erdil: I actually went into waves for the first time in Maui in 2007, but I had really old gear and it was the first time that I saw proper waves, I had a old 70l Naish board from 2003 and a 4.3 Hotsails Maui and I was really just “wave-sightseeing” not seriously playing with them since I had no budget. I was also very cautious not to break anything. But these mountains of water made such a big impression on me, that I think I felt in love with the ocean once more back then… Since then I’ve been to Cape Town a couple of times, but never for long and never with new kit. Last time, when I was there I still only had that board and that one sail for every condition. I thought I made it work, but was often overpowered! So this year when I came here with my brand new Patrik Trailer Wave board and the right Purelip Loftsail for any condition it really had an amazing effect on my sailing! Without any training the board made making smooth cutbacks so easy for me and the sails just made the combo perfect! Feeling that I could all of a sudden do it motivated me even more to go harder every time… so really I should say thanks to Patrik for making such amazing boards that make wave sailing so accessible!  What I love about wave sailing is that it’s different every time. No wave is the same and I feel a much closer bond to the ocean compared to Slalom sailing.  Also I love a good challenge and there is still an awful lot I need to learn!

C7: And you already tried some Backloops?

Lena Erdil: Actually the rotation for the Backy (Backloop) worked almost straight away. The problem is the landing, the nose of my board always gets stuck in the water when I land. Unfortunately I will have to wait till next time I get some good waves now, as chances to score waves in Turkey are slim, although I will try and I hope we have some more onshore storms before I will return to a real wave spots next winter. I can’t wait to finally land one!

C7: Have you ever watched a wave or freestyle competition live?

Lena Erdil: I watched the freestyle a couple of times, once in Aruba and once in Vietnam but never a wave competition live. I was following it on the PWA -live stream page though, so almost live.

C7: And you have started with freestyle, too?

Lena Erdil: Yeah, I have a lot of respect for the freestylers. They have to practice so much to consistently land the right moves. 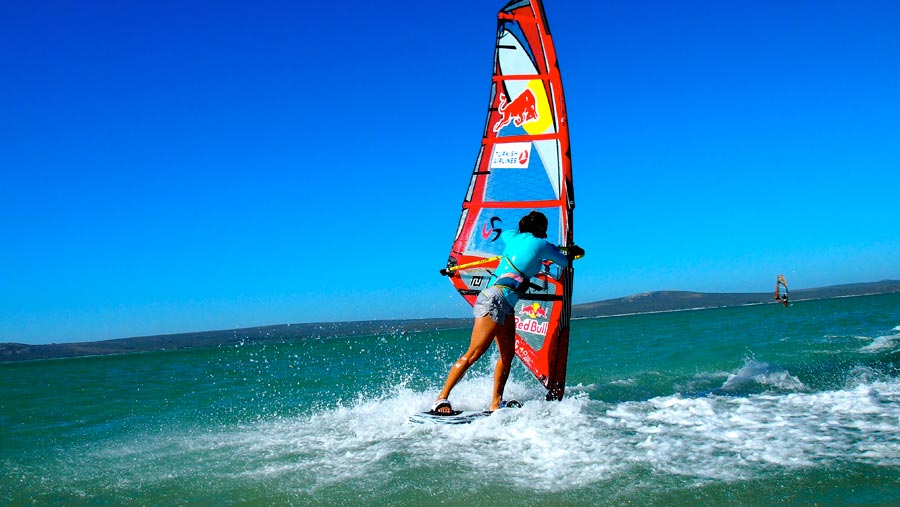 C7: Most of the freestylers are really young. With your 24 year, do you feel to old for it already?

Lena Erdil: HAHA no, there are still a lot of moves that I want to learn!

C7: How many attempts did you need to land your first Airjibe?

Lena Erdil: I think it took about a month! But the funny thing is that once you land it more consistently all the times you crashed so stupidly seem so ridiculous, seems like I should have always just been able to do it, but I definitely remember feeling bruised all over my body in Dahab from just smashing into the water at full speed every time! Again strangely enough though I landed my first Airjibe the first time I was on my new Patrik 99l freestyle board, made me start to realize that good equipment really does make a big difference, no matter what discipline! 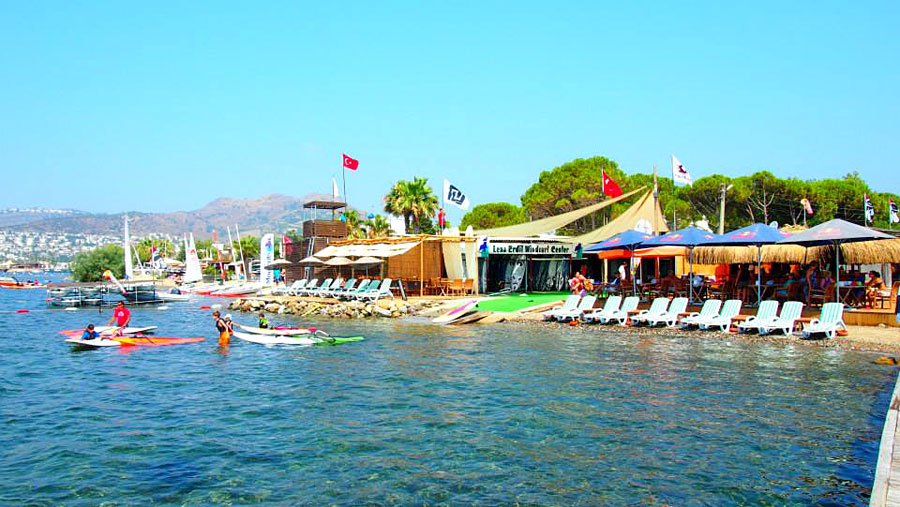 C7: Are you inspired by any other sailors?

Lena Erdil: Karin Jaggi inspires me after so many years. She is still in the top three of both disciplines, slalom and wave and used to compete successfully in freestyle and held the speed record for such a long time! She’s definitely someone I look up to a lot!

C7: Does it help your racing skills to sail more on light funboard gear?

Lena Erdil: I think so, since I started doing a little bit of freestyle my slalom results have also improved, but despite this correlation I think it doesn’t really matter what kind of kit you’re on, it’s the good old time on the water that will make the difference in the end…

C7: Do you have some spot where you can sail in waves at home and do you have plans to compete on the PWA tour in waves and freestyle, too?

Lena Erdil: I wish I could keep wave-sailing at home, but the conditions don’t really permit it. But I kept practicing some freestyle. I have moves like the Spock, Grubby and Flaka on my list. I would like to be able to land them, but freestyle will remain just for fun for me! It’s too time consuming to become a pro when my priority is slalom. But still it’s really nice to be able to do something else than slalom all the time and still be windsurfing, I think it’s also good for my board feeling and balance and thereby it helps me for slalom at the same time. I will properly train wave sailing again next winter and then for 2014 the plan is to compete in both disciplines, Wave and Slalom.

Lena Erdil: No, as I never started with Techno or the like I doubt I’d be very good at it, also from the few times I have tried it.  I am not a big fan of the big kit. It’s a bit too heavy for my taste…

All pics by Simon Hayhurst

Waveriding at Cape Town was fun.

A waveride in front of the tanker.

Clean waves are the best

On top of the wave

Sailboat racing in the Atlantic Ocean

Lena and teh penguins

Scoring hard at the lip

What an atmospheric shot

Ready for a Slalom session

The view from the center

At the cape in South Africa

A wave session at Big Bay

Foggy weather at the beach

Lena rotates through a Backloop.

Lena lands an Airjibe after many crashes