No one knows Ho’okipa and the local scene better than Kevin Pritchard. He as well knows the Euro rippers from his past on the PWA tour. Therefore the obvious thing is to speak with Kevin about his predictions for the this year’s Aloha Classic. Read a few interesting comments from the former PWA Wave World Champ. 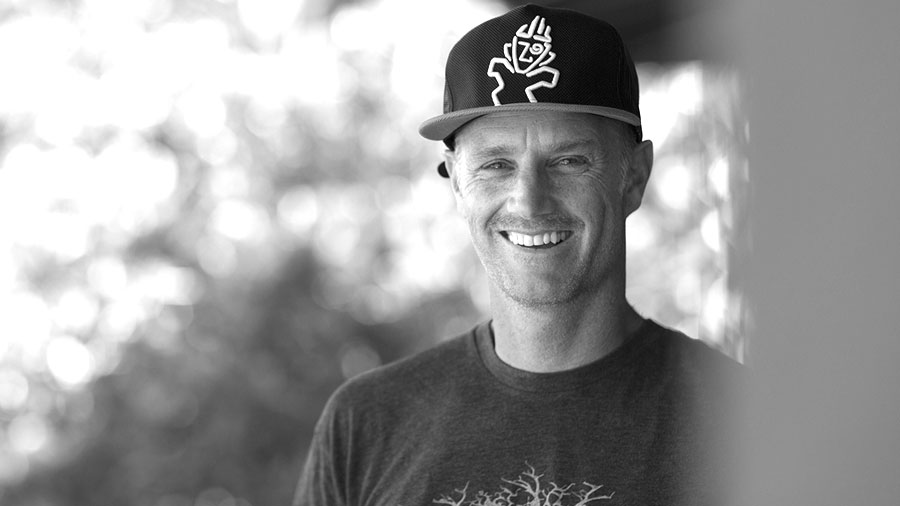 Continentseven: Kevin, the Aloha Classic is around the corner. How is your motivation for the event and will you win?
Kevin Pritchard: Well do you want the truth or should I take the politically correct version. My motivation to be a better windsurfer and wave ride even better, there is no doubt that I want to keep improving. I want to hit the lip harder than anyone else out there, drive a perfect line down the wave, and have more power than anyone else out there. I also want to do the cool fun tricks that the kids are doing as well. So as far as that goes, I have tons of motivation. I think this summer trying doubles, going on trips, working on new moves, proves I have the motivation still.

“I also want to do the cool fun tricks that the kids are doing as well.” Kevin Pritchard

To go out there and get judged by a panel of guys in 18 minute long heats, that I am not sure if I am super motivated for. I think it makes it hard to have a bunch of guys come into town, trying to get waves and have fun with 40 or 50 more people on the water at  your home break. It  wears you out a little bit, but I am trying to overlook that. I am super thankful for the PWA to put an event on in France until this contest starts otherwise it would be full for quite a while in advance.. ha ha.

As far as me winning? Well I wouldn’t be too surprised if I did. I would love to win, that is for sure. I would love to collect that big check at the end of the week, put the trophy on the counter, and go to sleep knowing that you had the best 18 minute or so heat of your life against the best windsurfers in the world! My plan is this, focus on wave selection, get the best waves and ride it like I know how to. The past few Aloha’s I was focused too much on being that “cool” tricky person, trying to set up for the ultra sick move on the wave. This year I want to go back to a more thoughtful Pritchdog approach. Sail a bit more like I used to in heats, not worry so much about trying to prove anything to anyone, just riding the wave, hitting it hard, fast, and powerful, and if the wave allows for a trick, throw it, if the wave doesn’t allow for that, then I just want to ride it and do some classic old school power turns. You look at Morgan’s style and last year he didn’t even do a trick in it. I think last year he had this crash that he pulled off, and that was his best trick. So I think for me, my game plan is to get the right waves and go for it. I want to have as many heats as I can to stay out there with only 4 guys on the water. That is my main focus. 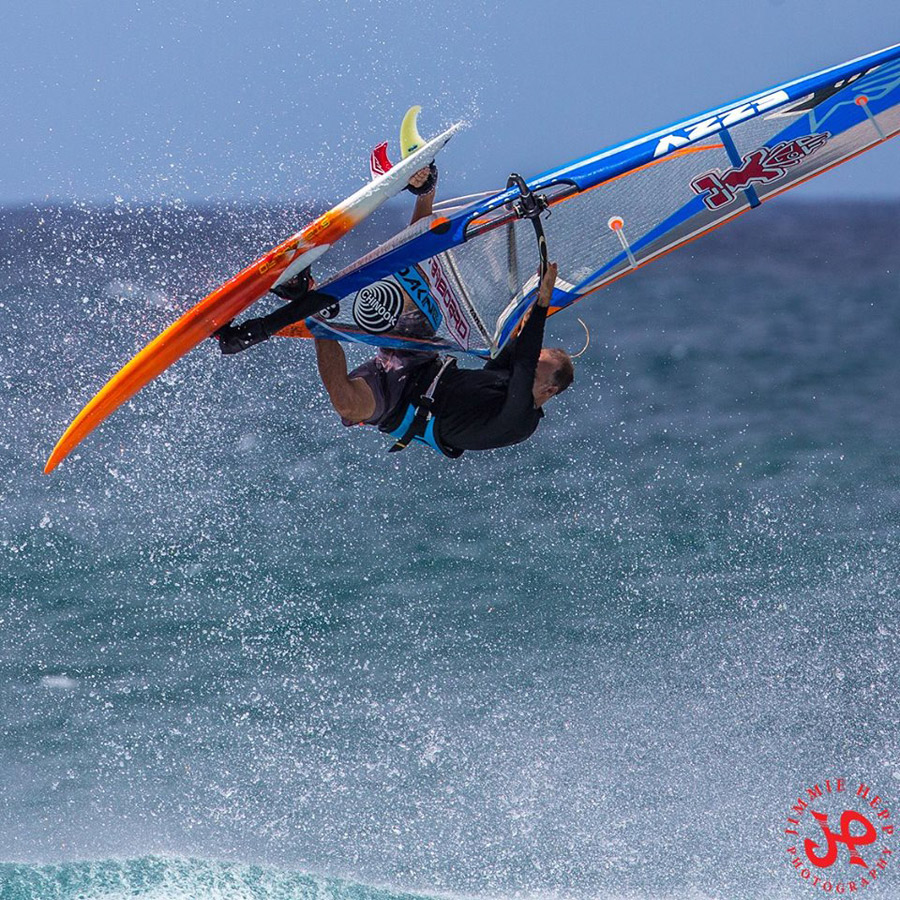 Continentseven: Will you compete only or will you get out in the break with your water housing and camera as well to deliver sick videos?
Kevin Pritchard:  I am going to be doing videos as well. I have a couple other guys helping me so hopefully they will be videoing a lot while I am on the water in the finals!!

Continentseven: How’s the wind and swell forecast for the event period?
Kevin Pritchard:  From what I have heard it should be great. It has been so rainy here the last weeks, it is incredible. So I am not super confident in the weather but for the most part we have a good swell forecast so that is one thing that we can be very thankful for.

Continentseven: Are the Maui rippers on form in 016? Will we see locals win?
Kevin Pritchard:  You know it is going to be hard to beat Levi or Morgan. Morgan is super consistent, he is the wave whisperer out there, just finding the best waves all the time and ripping them to pieces. Levi, well everyone knows what Levi can do on a wave. He has the experience now and is motivated to crush these guys. I would like to see Brawzinho win in Hawaii, cause the guy rips so damn hard it is crazy, he just needs to get the right waves. Graham would be fun to see do well here. He has been on tour all year long getting a little bit lost in the competitions, and needs to have a breakthrough event. He has a different approach to wave riding in general and is super focused on the mental side of thinking it all through.. that can be good and bad, you don’t really want to overthink it too much, just go out and do what you know how to do, and that is rip. You can never count out the Naish team, Bernd and Kai. They might not be getting too much hype, but they both rip so hard and are competing in the SUP which gains them competition knowledge. Bernd knows how to windsurf and compete and I could see him doing well.

Continentseven: Any news from the locals? Gear updates (fin setups, shorter boards, sponsor changes).
Kevin Pritchard:  I haven’t seen any sponsor changes. The locals? hmmm.. I think they are going to have some fun out there. (e.n.: Canadian Ingrid Larouche switched from NorthSails to EzzySails and Josh Angulo tests S2Maui sails at the moment, Boujmaa Guilloul experiments with his single fin setup)

Continentseven: Who will win the PWA title? Fernandez or Mussolini?
Kevin Pritchard:  I think Victor is going to win. He has what it takes, is super calm under pressure, he has been giving it his all coming here for the last few winters and pushing hard at Ho’okipa. It should be fun. You can never count out Musso though. He used to live here when he was young, knows the place and knows how to crush it at Ho’okipa.

(e.n.: Victor Fernandez already has one-hand on the world title heading into the final event of the year after no result was gained in La Torche, France. The Spaniard is guaranteed a minimum total of 6,201 points with the discard — meaning the only way Alex Mussolini can deny Fernandez a second world crown is by winning the NoveNove Aloha Classic and hoping that Fernandez finishes fourth or worse. In the event of a Mussolini victory and Fernandez finishing fourth, the two sailors would finish tied on 6,201 points, so if there are suitable conditions, the title race would then be decided with a nail-biting sail off.) 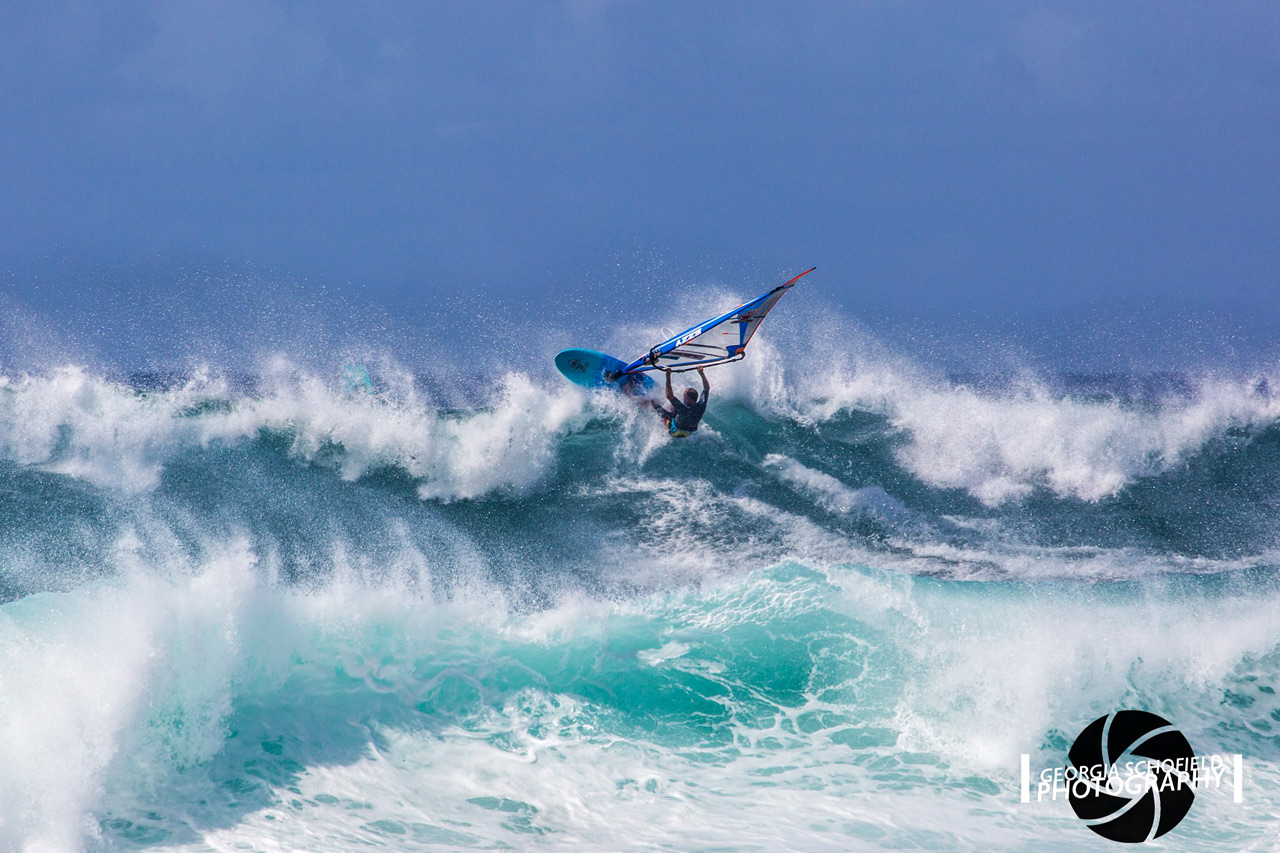 Continentseven: Who will win the AWT titles? Guilloul or Noireaux, Larouche or Hauser?
Kevin Pritchard: I don’t know the points between Morgan and Bouj, but Morgan definitely is looking good out there (e.n. Boujmaa leads the AWT overall ranking with 28.000 points and Morgan is in 2nd with 23.200 points) Can he win 3 years in a row. HMMMM.. that’s gonna be tough. As far and Ingrid or Sarah… hopefully it gets interesting (e.n. both have exactly the  same points of 28.000). Ingrid loves to compete and it is fun to see her level shoot up during the heat. Sarah has been sailing great out there and she just got a new shape from Fabian at Tabou that looks to be suiting her very well. So we will see. It’s gonna be fun to watch!

Continentseven: A few experienced veterans are registered  like Josh Angulo, Ross Williams. Will we see Jason Polakow this year?
Kevin Pritchard:  Josh is here??? OH MAN, that guy, if he comes here and wins I am going to be super bummed. Ha ha.. He probably hasn’t windsurfed at Ho’okipa in a year or so, and you know if he gets in your heat he is going to rip. But you know Josh is going to show up, single fin board, probably the same shape from 2007, big 5.8 sail, confident and will take some names down. That guy rips.
Ross, he has no pressure to do well here, and he is just coming off the 3rd place racing finish. He is an amazing wave rider so we will see. I feel like the guys who are under the radar, with no pressure are the ones that are the most dangerous.
Jason has entered and is going to rip if the waves are big, which funnily enough, he just texted me as I was writing this and said “looks like a Jaws swell on Wednesday, gonna be too big for Ho’okipa to be good, but they should just run it anyway”..  Jason rips, he knows how to compete, the waves are going to be big, never count him out.

Continentseven: Thanks for your predictions and good luck for th event.