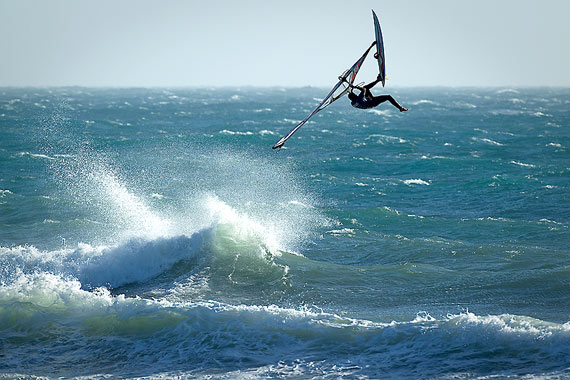 Kevin takes the title at the Wave Bash.

The Pistol River Wave bash had a sudden death a super final today with Cisco Goya and Kevin Pritchard. Conditions were epic,  Race Director Matt Pritchard set out with a 20 minute heat, best 3 waves and best three jumps counting. Such a crowd pleasing heat. Pritchard started out with a patented perfect one footed back loop, followed by some nice wave rides. Goya hit some big push loops and and his fluid wave riding was a pleasure to watch. Pritchard then started to systematically take Goya out of the sudden death final. Acing a forward loop, then on to a perfect one handed one footed back loop, followed by a uncharacteristic double forward loop right in Goya’s face. Not to be out done Goya tossed a double as well and blew the minds of the local crowd. Pritchard finished off his last wave with a Taka into the pit and came out the victor!

So the head-judges brother won the contest, nice… 😉
(for the record: I’m just kiddin’)
grtz,

We received this little update directly from Kevin Pritchard.

you should give a little credit to the windsport magazine article that sourced this!