Kevin Pritchard won the Aloha Classic Overall with a win in racing and a 3rd place in the wave discipline in 2000. 16 years later the 40 year-old can hardly belive his luck and finds himself on top of the Aloha Classic podium again together with Marcilio Browne in 2nd place and Levi Siver in 3rd. But the victory was not easy for Kevin. After his single elimination victory and waiting for 5 days without conditions  it all came down to the super final, because Marcilio won the first winners final of the double eliminaton. And it was a very tight battle. The wind dropped during the heat, Kevin had a higher jumping score right at the beginning and Brawzinho collected bigger points with his wave rides. Kevin Pritchard picked up a brilliant wave just a few seconds before the end of the heat and received 8.50 points for a tweaked Aerial and his one handed Aerial off the lip. This last wave made the difference and Kevin Pritchard defeated Marcilio Browne by less than a point.

We hooked up with Kevin Pritchard, who still can’t believe his victory. 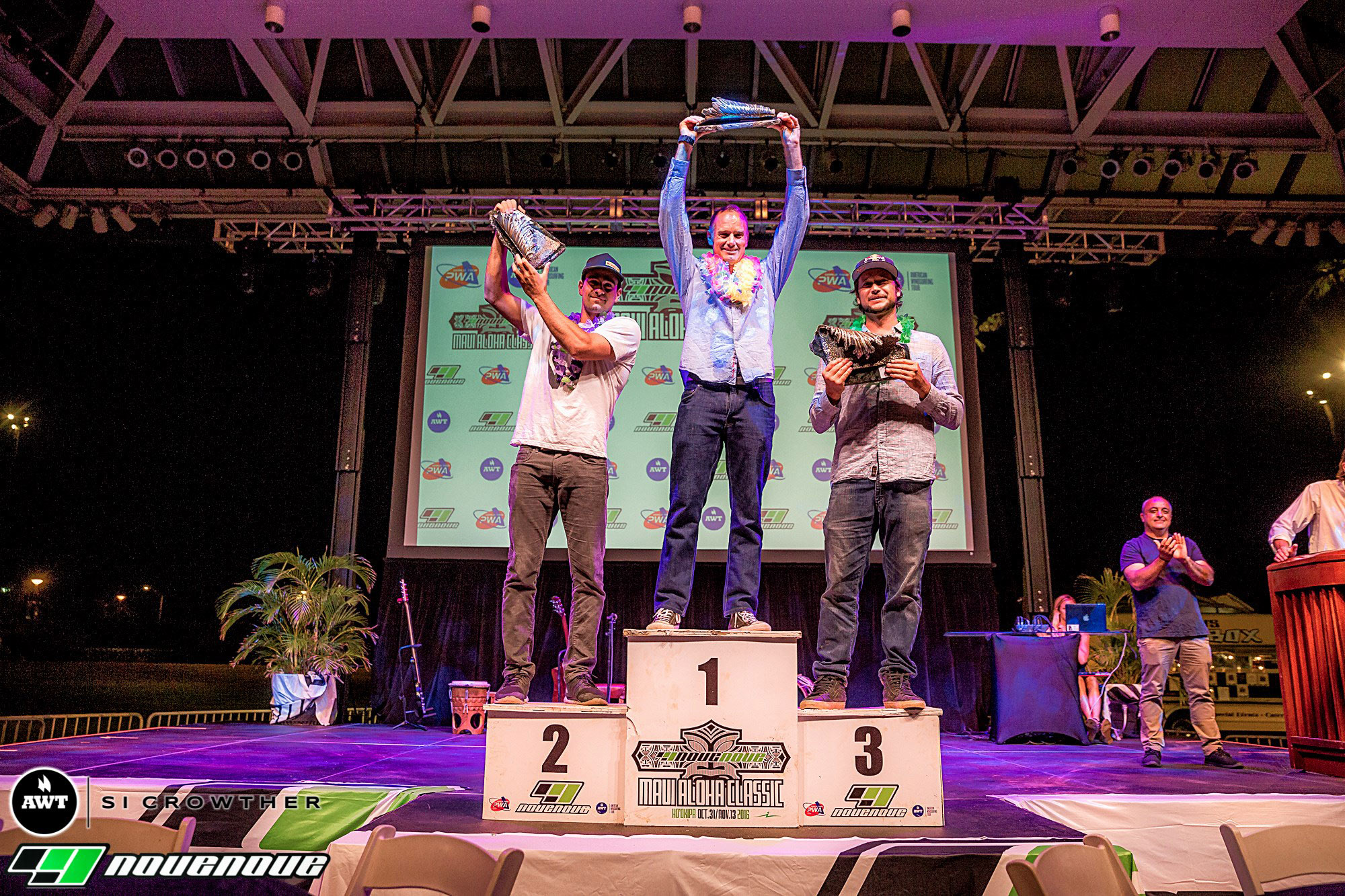 Interview with Kevin Pritchard about his Aloha Classic victory

Continentseven: Did you already put your trophy on the counter?
Kevin Pritchard: Well, I am pretty destroyed after that awards party. I think the stress of not running for 5 days or so and then to have it in the worst possible conditions for me especially against Brawzinho and losing the first one was just too much to handle. I managed to get the trophy home which is pretty good (actually I gave it to my mother straight away cause I know how I can get) haha…

Continentseven: In our interview about winning the Aloha Classic this year you said „Well I wouldn’t be too surprised if I did.“ Still not surprised?
Kevin Pritchard: I am super surprised….. I was not sure about writing that but… Really honestly can’t believe it.

Continentseven: How did you celebrate the title?
Kevin Pritchard: Don’t remember. But I was pretty happy.

Continentseven: Honestly, was it a hard piece of work to shine on top in the end?
Kevin Pritchard: Yeah for sure. I wanted to not go to the super final because you never know how that was gonna turn out. I was super bummed because, I don’t think I have done a jump since around Pistol River which was 3 months ago or so. To have that thrown in, in super  small conditions against Brawzinho, there is no way to beat him. Well unless he misses his first jump and then the wind dies. I mean lets be honest he is a better windsurfer than I am right now. The guy rips so hard, he was doing doubles off of chop out there. His level is so high, I just managed to beat him in the 20 minutes that we were out there. Thats the luck of competition I guess. 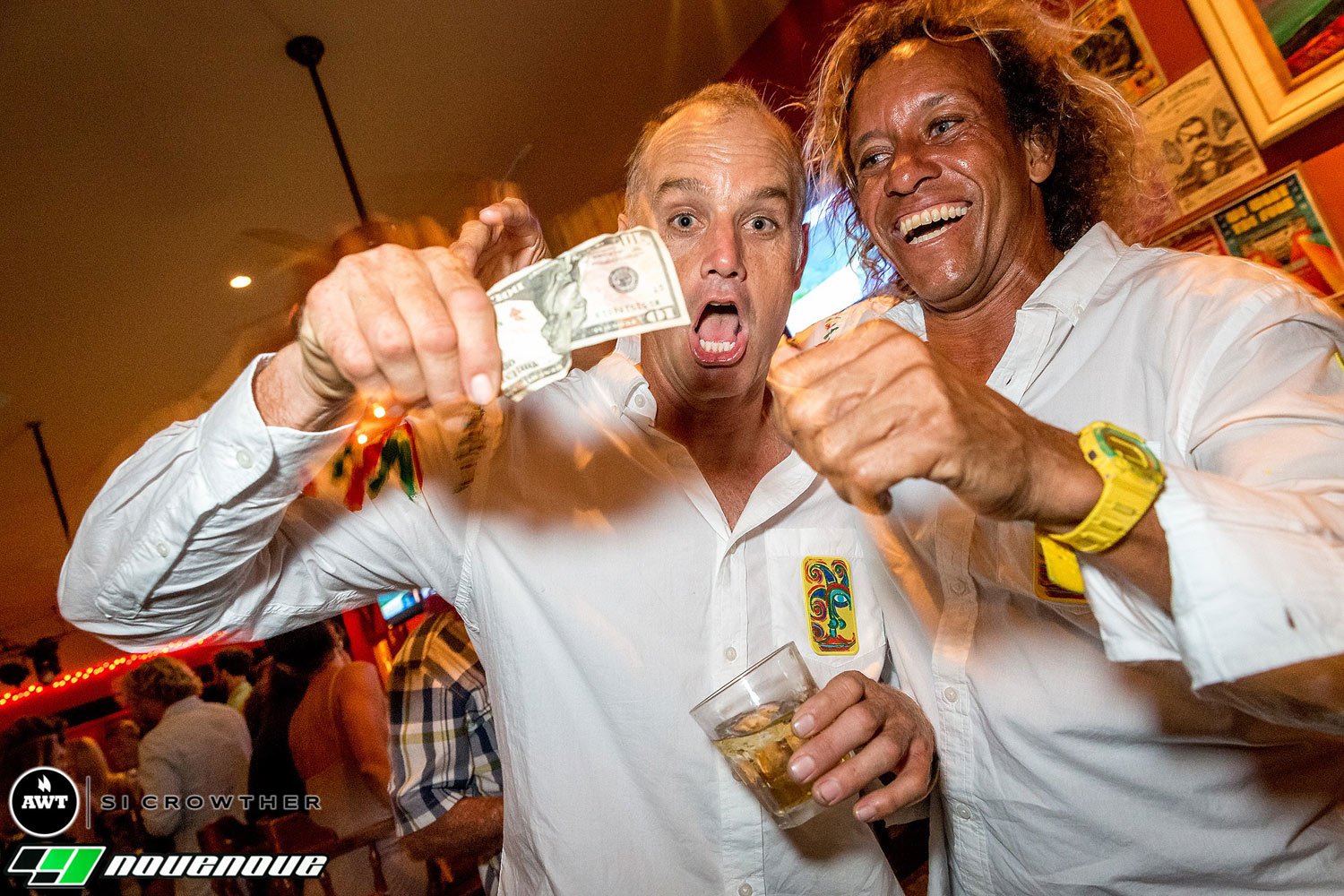 Continentseven: What did you do better than your world class opponents?
Kevin Pritchard: Let them crash hahahah… I was just doing what I told you. Trying to get a wave that opened up with tons of hits and not shred it as hard as I can. The laws of consistency came through, putting the pieces together.

Continentseven: In our interview before the event you said: „I want to hit the lip harder than anyone else out there, drive a perfect line down the wave, and have more power than anyone else out there. I also want to do the cool fun tricks that the kids are doing as well.“ Mission accomplished?
Kevin Pritchard: I was pretty happy to nail the Air Taka in the final. Shows that I am still up to date, still pushing and still going for the new cool moves. I would have liked to stomp a big double but just stuck to my signature moves like a one foot one hand Back Loop and some simple tweaks and things like that. I was pretty happy with my performance.

Continentseven: How nerve-wracking was it to wait for 5 days without any suitable conditions?
Kevin Pritchard: I tried to stay consistent with my daily routines. I was mountain biking and training and tow in surfing just having a great week trying not to think about it. But you can’t not think about it. It is one of the biggest events on the world cup and to win it what a dream. I was so stressed it was crazy. I wished they would have just finished it the same day when there were big waves. I think I would have been a bit more confident. 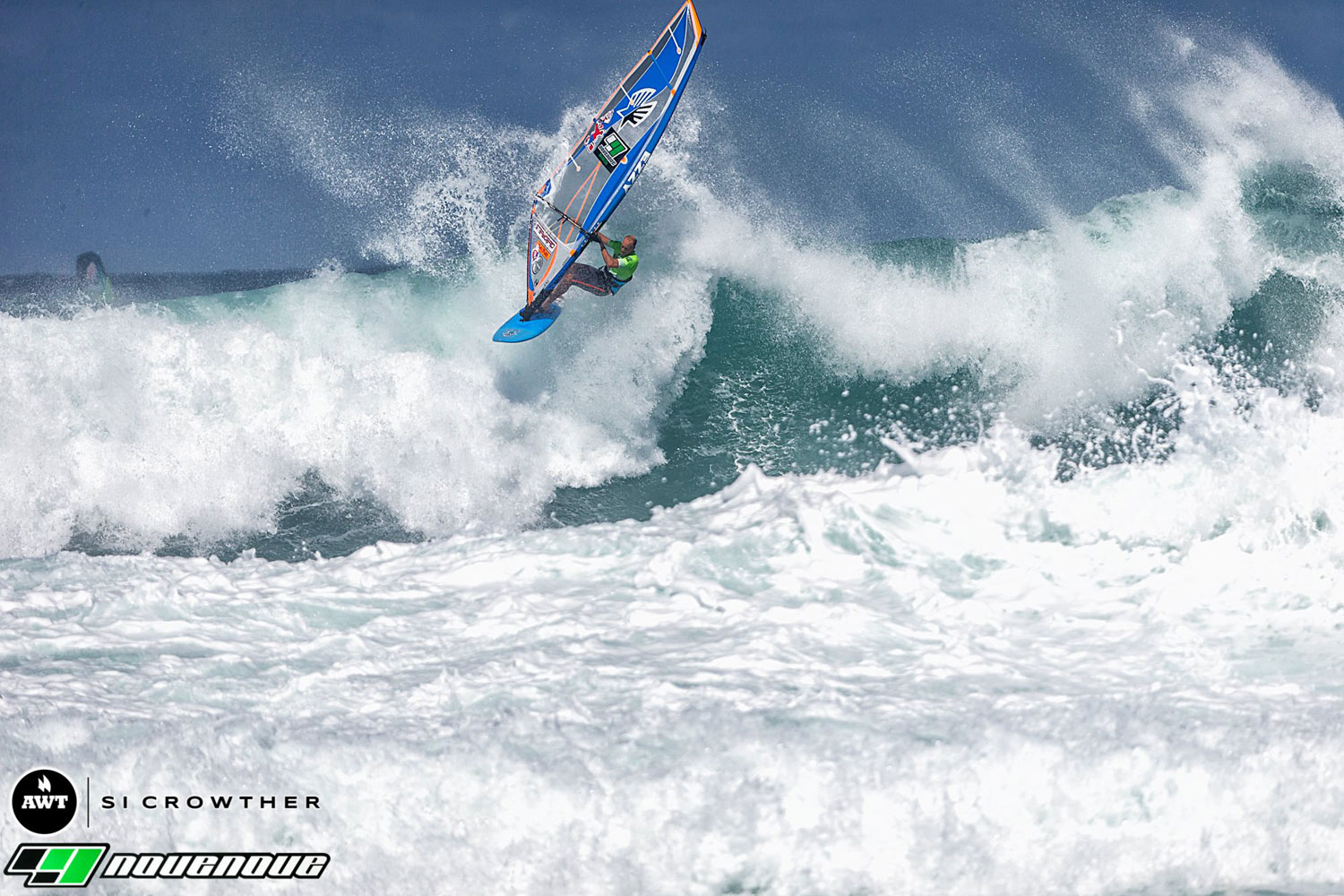 Continentseven: You are the buzzer beater. Why do you win almost all your heats in the last seconds?
Kevin Pritchard: Ha ha.. It takes me that long to get started. You know the winning wave just came to me. It wasn’t a tactic or anything, it just was the perfect wave for the heat and I rode it pretty good and that was it.

Continentseven: Can you describe the final a bit?  Did you have the best 22 minutes or did you sail the heat of your life?
Kevin Pritchard: Like I said before, Brawz is amazing. He just let it slip away. I saw him crash on the first jump and I was like oh boy, that could be it. He sails a super mental game and I think that jump crash just started his heat out wrong. I made my one footed Back Loop and then the wind kinda died. I was like please no more jumps. All Brawz would have had to do was a nice little double and I am out. So I was pretty happy. I had my jump in the bag and then wind died too offshore. Then I had some ok wave rides, an Air Taka, then at the last minute the wave of the heat came and I was on it. It was a total gift. Still can’t believe it

Continentseven: We saw a jump counting on the final day. It was exciting for us as spectators to watch. And how was it for you looking for the combination of a steep wave paired with suitable wind?
Kevin Pritchard: Can you imagine how this made me feel. I mean it was totally flat in the morning, and people were like oh we are not going to run it in this. We don’t want to do the double in such bad conditions, so then I was just sitting super stressed out waiting and waiting for the call. I was like oh man…..then the wind is picking up and and the waves were still very small. I kinda knew the PWA wasn’t not running  with wind and waves even though everyone said it was too small. I know what they run in for the events in Europe and this was still far better than any of that. For me putting a jump in was like oh man, they really want Brawz to win this thing. He is the best jumper in the world. There is nothing I could do to combat him with that. So I was just super stressed. I kinda just was almost already defeated in my mind. I could see my first place slipping away so easily with a jump at a wave riding spot. That was a tough one to swallow. I was super scared. Probably more scared than those huge days… haha. Yeah I was the most scared when it was 2 feet and windy. 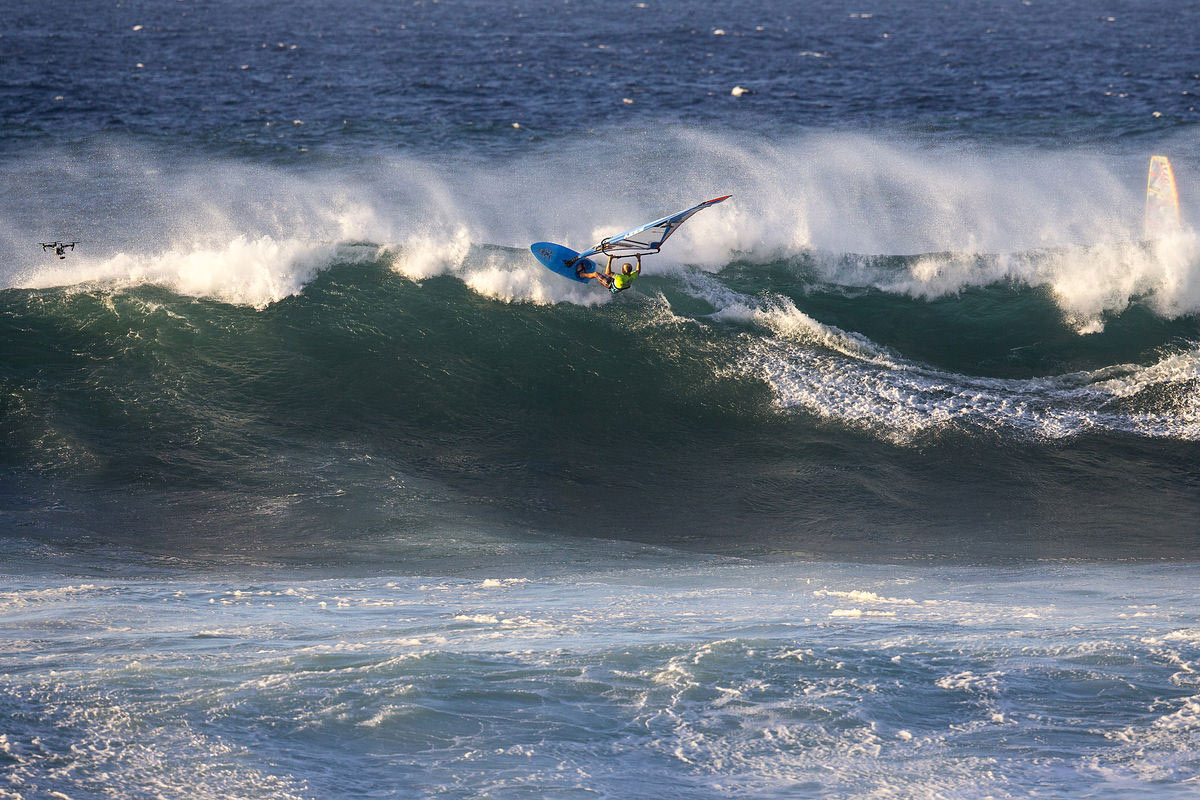 Continentseven: Winning the Aloha Classic is something big. Is it the biggest title a wave sailor can win and is it one of your biggest titles in your career so far?
Kevin Pritchard: Well I don’t think it is the biggest title so far. I might be the most happy ever before.  I won the Aloha Classic Overall with a win in racing and 3rd in the wave I think in 2000. So to win the same event 16 years later, in the waves, is kinda against the odds I think. It’s maybe the oldest person to win a wave world cup?  Maybe? How crazy to be able have a career that long and still keep on top of the kids. I guess Slater is still going but wow.. I am just so stoked to do it and still can’t really believe it.

Continentseven: We saw insane action at the Aloha Classic this year. Many experts said this was the highest level in competitive wave sailing ever. Do you agree?
Kevin Pritchard: Did those experts watch what they were doing in Pozo this year? I think the level that the boys put on over there is crazy. Brawz, Victor, Phillip, that kind of sailing so so progressive. If you look at how I won, it was just the consistency of getting the right wave and doing the right thing on it. On port tack they are doing double spin 360 Air Taka’s goiters and all that stuff on one wave. The level there is crazy. But maybe that is just cause I can’t do it like they can, and so for me hitting a 35 foot wave face is way more normal than doing all those spinning moves.

Continentseven: What comes next for you? Any crazy cold winder storm trip in Europe?
Kevin Pritchard: Well I signed up for the Storm Chase. Lets hope I get the invite!!! Thanks C7 for keeping the stoke alive!!

Continentseven: Hope you make it in. Thanks for your the interview.

Humble, gracious, and a gentleman! Congrats on a well earned victory, Kevin!