Kevin Pritchard about his AWT title & the 2014 Aloha Classic

Kevin Pritchard (US-3) was on fire and won the 2014 American Windsurfing Tour (AWT) tour for the first time in his career. After attending all six tour stops in 2014 he won with 3000 points ahead of Levi Siver and 5300 points ahead of 2014 PWA Aloha Classic winner Morgan Noireaux. Kevin: “The AWT is no joke, there are some great riders and some great events. Anytime you can go out and win a title, against some of the greats of the sport, it feels awesome.” 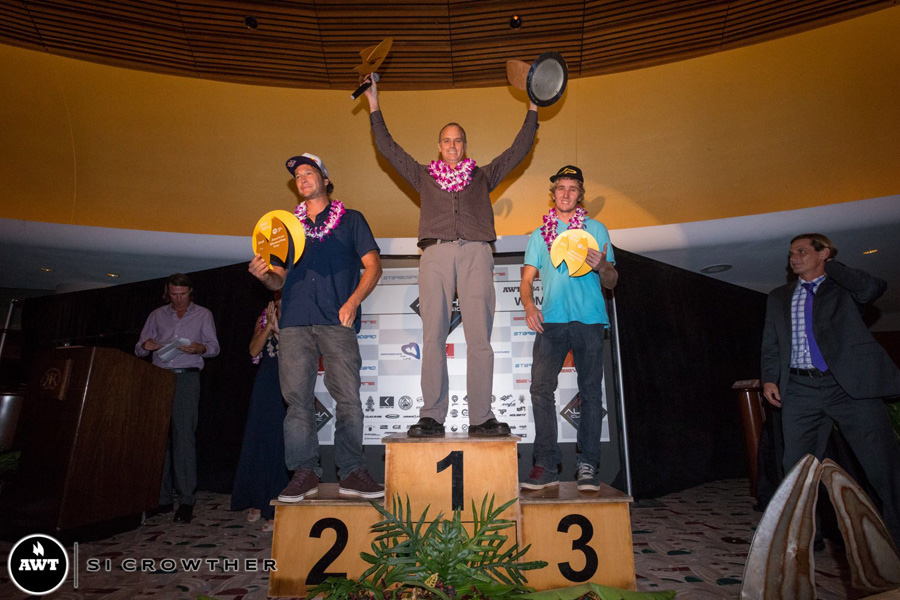 Continentseven: Congrats winning the AWT tour for the first time! You were able to hold off Levi Siver and Morgan Noireaux. How does this feel?

Kevin Pritchard: It feels good. Like I said going into it, it was not really my life goal or anything, but man it sure feels good to win. Morgan and Levi both rip so hard. They are both part of my inspiration of how I sail and to be on the top step of the podium, well it feels great..

Continentseven: Does this title victory feel the same like your other earlier titles?

Kevin Pritchard: Way better!! ha ha.. Well maybe not but still, was fun to win. The AWT is no joke, there are some great riders and some great events. Anytime you can go out and win a title, against some of the greats of the sport, it feels awesome.

Continentseven: Are you disappointed you did not win the AWT final? What did you miss to win?

Kevin Pritchard: Yeah for sure. I thought I sailed pretty amazing in the final. Everyone on the beach was 100% sure that I won. They even carried me up on the stage and then to have the judges say I didn’t win, that kinda sucked. After watching the heat on replay it hurt even worse cause from my side I thought I should have got the win. We all know wave sailing is a judged sport, and that is part of the game. I can’t complain, I have had a great run at winning, and I am sure there have been a lot of heats where I snuck through somehow and lots of people were surprised. That is life.

Continentseven: You definitely dominated the AWT tour in 2014. Older, but skilled and experienced, a good description for you?

Kevin Pritchard: I don’t know about dominated but yeah for sure older. It is funny because these kids are keeping me young. I love what I am doing and right now, the past 4 years of my career have been some of my most fun memories of my life. I definitely feel like I am getting older, but at the same time I made an Air Taka in one of my heats, and had a nice 360 in the final as well. As much as I have the old school moves down to a science, I feel on the right day I can throw down all the moves that the other kids are doing.

Continentseven: In the past you finished in 2nd overall a few times, now you won the AWT title, another career highlight at the age of 38. Is that the moment you think about to stop competing or is it an extra boost to push even harder? Robby Naish got 7th in the PWA Aloha Classic with 51 years.

Kevin Pritchard: We will see what is in store for me. I don’t really know what I want to do as far as competing or not. I will just wait and see.

Continentseven: Do you think you still improve your windsurfing skills? What’s your personal feeling?

Kevin Pritchard: Not really. I think this spring I was sailing really good, driving the board hard through the turns and going fast and hitting the lip. I love it when I do fun tricks. I have been enjoying my equipment quite a lot and I think that is what improves everything. Maybe when you get new gear, you improve your sailing because it allows you to do things better, faster, easier. I think things like the Ezzy 3 batten sails have helped me a lot cause I really like how they work.

Continentseven: You were participating in the PWA event, too. What was your personal impression? 7 of the 10 top ranked riders are below the age of 30. Did we see a revolution of young crazy rippers or did the older ones just have bad luck?

Kevin Pritchard: It’s great to see the younger people doing well. It takes time to get the experience and to put it all together. It was great to see Morgan win. That kid is awesome and I loved having him beat all the PWA guys. He rips so hard and to see him progress over that last few years and to see how he sailed in the finals, was incredible. He sailed like a true veteran. I don’t really think that it is a crazy revolution, just the young guys are getting older, smarter sailing and they rip so hard, they are just learning how to compete. Graham is always one to rip so hard in practice, but this event he was putting it all together. Ricardo, that guy is crazy ripper. So exciting to watch. Brawz was amazing too, they where going into these big old pits and throwing huge Air Taka’s. Brawz had one Air Goiter Taka thing that he accelerated out of. It was sick and pretty underscored if you ask me. Ricardo’s thing was so rad too. Thomas won the world title which was awesome for him, and it must feel great to finally get on that top step of the podium!

Continentseven: You sailed extremely well in the PWA event and lost in the third round of the double against Antoine Martin and Jason Polakow although you had the highest single wave score with 8.38. Is it hard to accept such a close defeat? You missed the next round by 0.19.

Kevin Pritchard: Yeah I was pissed with that too. You should have seen the wave that Jason got an 8 for. Don’t get me wrong, Jason is still by far the most radical sailors at Hookipa, but he had this little tweak thingy that was not really an 8 in my book. Ha ah.. I love Jason’s riding, it blows my mind the speed and power he gets out there. I love to watch him sail too so it was pretty fine with me. For some reason I was more focused on the AWT than the PWA event. I might have had it all wrong, but I think I just was putting so much energy into the AWT that I was not as into it as I should have been. Guys rip so hard and if you are not on your A game you are going to get beat.

Continentseven: Did you watch the ladies competing? What’s your impression about them?

Kevin Pritchard: Yeah! Iballa was killing it! She did a nice huge air that was in the pit, was nice. Pretty sick. I had my money on Junko, and was rooting for Ingrid to win the whole thing but it wasn’t to be. I have been good friends with Iballa for a long time and I am super happy for her to win it!! It was great.

Kevin Pritchard: Thanks! I am glad you noticed we weren’t filming. I was pretty disappointed with the video coverage of the event this year, but I am pretty picky. Last year I was competing, filming and editing daily videos every night. I was on my own slaving away and it was just too much for me. Johannes wasn’t able to help out last year or this year and without him I just couldn’t do it on my own. The one thing I love about making the videos is being able to put in clips of myself, but to film and compete and do daily edits, I just couldn’t do it. The events that are 4 days, and we make one killer video at the end, are much easier and actually gives me something to do throughout the event. I hope that Johannes and I can team up again and do a couple events. He has been busy doing other motion graphics and things that make him money so he can pay the bills. The windsurfing stuff he does it cause he loves the sport of windsurfing and likes to deliver quality videos to promote the sport. In the past he would come on his holidays to come and work like a dog making videos, and now this time of year he can’t take that much time off. I really miss him doing the videos, too. We have a great time together and I think it builds up the the look of the sport.

Continentseven: The competitions are done. What are your winter plans?

Kevin Pritchard:  opefully go and score Cabo Verde again. I love it down there and really want to go back. We will see. My girlfriend is going to be racing in Finland this weekend for the start of her ski season so I am getting excited to watch that. She has been training so hard and I hope it will all come together for her. Other than that, sail some great conditions on Maui, try and keep up with Morgan and the rest of the crew that pushes the sport. Graham and I are also hoping to do some more “Tourist of the Sea” videos so we will see what we can come up with. I love winter time here and I am so happy to get to live this life!

Click through the gallery with the highlight tour shots of Kevin by Simon Crowther!

The winner in Baja

The winners are announced after the AWT final at Ho'okipa, Maui

Onehanded Aerial off the lip

Hitting one of the endless lefts

Ripping at the homespot

Digging in the rail deep

Deep inside a wave

KP can't get enough of Aerials

Another Aerial at Ho'okipa

In the land of lefts

Ready for a hard landing

[…] To read the rest of this interview, please visit Continentseven’s website. […]