We were wondering how Kauli Seadi is doing on his Dream Tour 2013. For everybody who doesn’t know, in June Kauli and his girlfriend Maria Fernanda Souza have started a trip on a catamaran sailing boat along the coast of Brazil. And the answer we got, was a little surprise, he had stopped his trip and prepares for the upcoming PWA wave events in Maui and Chile. For sure, both spots will suit Kauli’s style, who was PWA Wave World Champion in 2005, 2007 and 2008.

“The boat trip around the northeastern coast of Brazil has been amazing. We discovered a lot of really beautiful and amazing spots.”  (Kauli Seadi)

Continentseven: What has happened since you were at Lencois Maranhenses?

Kauli Seadi: We have been true so many spots, and there was all types of places, from really awesome surf conditions with no wind to some great snorkelling and also windsurf spots. We discovered some really amazing spots along the coast! Also fishing was definitely amazing and super fun. 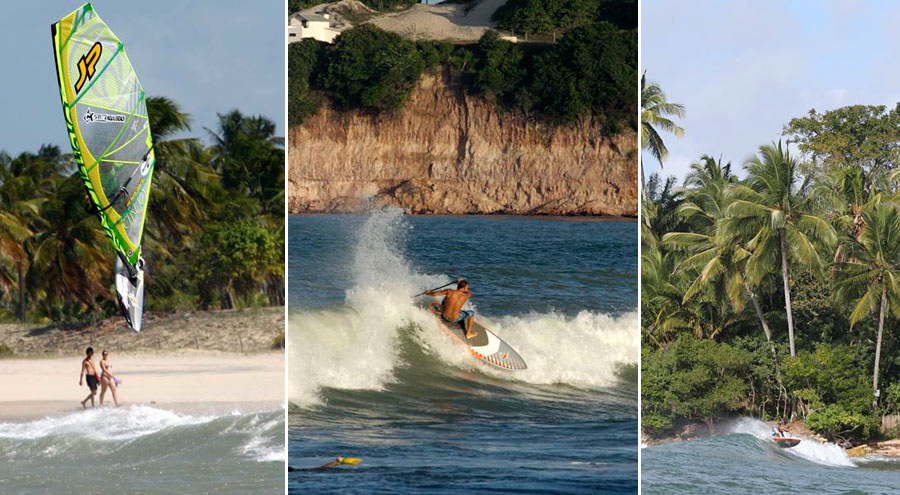 Kauli Seadi: Over all the trip has been good, me and my friend wore able to make safe choices , but we had a lot of scary times getting close to beaches with no charts and most of them full of rocks. We enter in one river mouth, where waves were breaking mixed with a lot of current. I did wave riding for the first time with a sail boat, ahaahh!

Continentseven: Did you find good windsurfing conditions and which gear were you using most of the time?

Kauli Seadi: We had excellent waves with wind in Rio Grande do Norte. Most of my time I used my JP board 82 liters quad  and Hotsails from 4.6 to 5.2 Ks3 .

Continentseven: Did you miss the competitions on the Canaries and did you follow the events?

Kauli Seadi: I didn’t miss it, but I would like to compete on nice wave spots with down the line conditions!

Kauli on the boat with his Maria Fernanda and the catch of the day.

Continentseven: Marcilio Browne has told us that you have been a big influence for him. Now he has won his first wave sailing event. Are you happy for him?

Kauli Seadi: Definitely, I’m so proud of him. I saw him from a kid learning the manouvers. He was always super addicted to windsurf, like his father and uncle. He really took it serious and dedicated his life to it and he has amazing talent. So I knew that soon he would reach his goal to win a PWA wave event. He deserves it all and he is a amazing person, too.

Continentseven: Where are you at the moment? And what is your plan for the upcoming weeks?

Kauli Seadi: I’m in Bahia and just stopped in a Marina to book a flight and get organized for the PWA events on Maui and Chile later in the year.

Continentseven: Good luck for the events.