Kauli Seadi is always experimenting and working on improving his boardshapes and details. For him it doesn´t matter, if it is a windsurfboard, SUP board or surfboard, he thinks always about new shapes. Now, at the PWA event on Cabo Verde Kauli was using boards with an very interesting tail. He implemented wingers and combined it with a massiv swallow tail. We now asked him about this tail developement and if this concept will go into production. 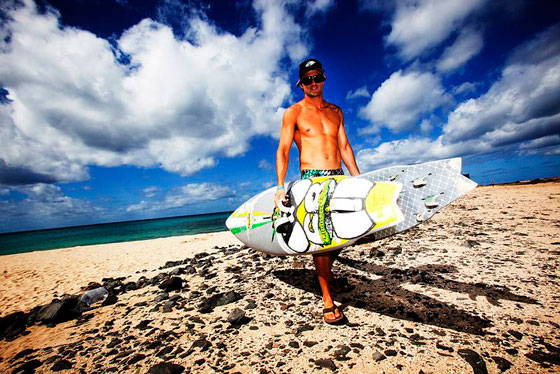 Kauli Seadi: “Yes, this is a prototype from Werner Gnigler that I have been testing for a while, and now we considering to make this extreme board in production, so people can actually get the same what I am using, in Hawaii and really good wave spots like Cabo Verde. We still have not made a final decision but we are thinking about putting it in production. These wing tail is really working to make the rider break the line more and be able to go up in the lip very vertical.”

most pro riders use custom we built kauli first quads at the long ocean factory with werner in cape town.what i have seen over the last 8 years working with werner is that everyone copyies each other.everyone is under a time deadline and not that much proper testing is done before boards go into production.change is constant and you much better off getting a custom board made everyone has different requirments.as for the new cobra construction what i saw this season in cape town is that they used a new yellow generic version off arex c70 90 and many boards… Read more »

any vids of the swallow tail in action?

i think that production boards are realy good
so good that most people can’t get to the limit of this boards
but guys like kauli can get there, thats why they use custom boards that are better on the waves but the miss i things that we need like up wind abilit and aceleration because we don’t have the same skils that have kauli

Haha, shouldn’t you be chranigg for that kind of knowledge?!

“actually no professional is using production-boards in the waves”
I have seen the whole pwa in Klitmøller.
Most of the guys were riding on production boards and production sails.

actually no professional is using production-boards in the waves. Most of the guys are on quatro-boards, some on angulos, ordoñez etc… I heard even Jason Polakow is riding in quatros. funny. That doesn’t mean that production-boards are shit… customs are just custom… 😉