The Double Elimination of the 2013 JP Aloha Classic PWA World Cup has started. It is the final PWA event of the year and it will decide, who will be the 2013 PWA Wave Champion. At the start of the day seven riders – Philip Köster, Alex Mussolini, Marcilio Browne, Victor Fernandez, Thomas Traversa, Leon Jamaer and Ricardo Campello – were all still in contention for the world title, however, by the end of the day only two sailors were still standing – Browne and Mussolini. Tomorrow will now see a scintillating finale as Mussolini and Browne go head-to-head in the battle for the 2013 PWA Wave World Championship and Levi Siver, who has won the Single Elimination is waiting for his contender.

Exciting video from day 8 at the 2013 Aloha Classic

Again Ho’okipa delivered great surf mixed with wind on day 8 of the Aloha Classic. The world’s best wave sailors were able to show their latest styles packed into perfect wave rides. The double elimination got started and in total 12 men heats got completed. In between two women AWT heats including the final got finished. Congratulations to Maui resident and former PWA sailor Junko Nagoshi, who won the AWT Aloha Classic title!

In the PWA men’s fleet the tension was on from the first heat full as several rider were competing for the world title.

Philip Köster and Leon Jamaer had to say good bye in the first round. Both are still very young and we are sure they will have many more chances to show their wave riding skills in the future at several events. Philip lost his title chances, but had to struggle with bigger problems, a staph infection. Windsurfers.de reports, that Philip had to drive straight after his heat to hospital to avoid a blood infection. Philip has to stay in hospital now for a few days. That’s not the Maui dream. We wish a quick recovery.

The next title aspirants, who lost their heat, were Victor Fernandez and Thomas Traversa. Fernandez showed nice rides, but missed the big scores. Thomas Traversa, who had with Ricardo Campello, Marcilio Browne and Boujmaa Guilloul three Maui experts in his heat lost too. Thomas did not sail much on Maui during the past years, as most of the events saw onshore wavesailing only, but had great moments in the double. Thomas has still the chance to win the Red Bull Storm Chase later the year.

Ricardo was on form, but missed to repeat his great heats in his 4th heat of the day. The wind got lighter and it was harder to catch the right waves. He lost against a stylish Josh Angulo and an extremely powerful Robby Swift, who both qualified for the top 8.

At the bottom of the ladder Marcilio Browne and Alex Mussolini sent the Pritchard brothers home. Alex nailed massive textbook Aerials off the lip combined with great wavesailing. Marcilio Browne was able to show how much he likes to sail at Ho’okipa and how many tricks he can stick off a lip of a wave. Just fantastic. He is the most new school oriented wave sailor, who probably can get one of the highest scores together with Levi Siver, Kauli Seadi and Bernd Roediger.

In total 6 or 7 more heats have to be sailed, The conditions look promising for today. The first heat of the day will see a 4 men battle with Angulo, Mussolini, Browne and Swift. The best two will qualify for the top 6 and will continue to sail man against man. If Mussolini and Browne will advance, the battle for the 2013 PWA Wave World title will be continued through round 29. If only one of them advances this rider will take the title. If both will not make it through heat 29, the better placed rider will take the title.

A quite tight story. Let’s see, what Friday will bring. Looks like Victor Fernandez will take third place overall, followed by Thomas Traversa and Ricardo Campello in the 2013 PWA Wave World Ranking.

The spot is nice. But he is right – under this title Double Elimination Video you expect some more sport there.

Ain’t no party in your sad, sad city ? Superb Movie as always. 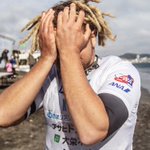 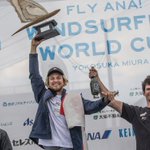 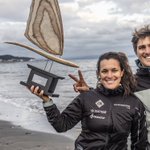