Swiss freestyler Jeremy Plüss is not only a passionate windsurfer, he as well is drummer in the band “The Pitchers, an upcoming Swiss Pop band, who has their home base in Berlin. Jeremy has been playing drums since he is 5 years-old and started windsurfing with 7 years. “My brother Valentin used to play bass guitar and together with our father we jammed for hours. Later we called our band “Powerjoint” as we all three shared the passion of windsurfing as well. The first time on a board was with 7 years-old. We used to go to Leucate twice a year with my father and brother. In that time I found my passion for the wind.”

The Pitchers just released a music video, produced on Tenerife, in which Jeremy is not only behind the drums, but also on his windsurfing gear. Perhaps they landed a 2015 summer hit with “Get Down”? Time will tell.

“Get Down” by The Pitchers 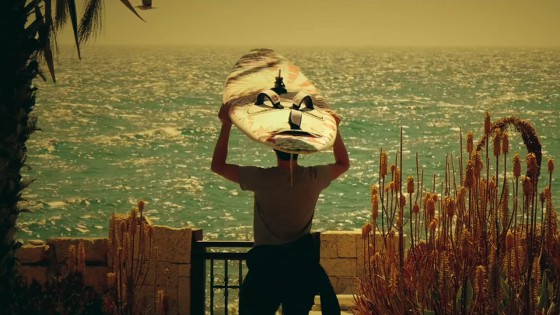 The Pitchers with Get Down

Continentseven: Why did you move to Berlin?

Jeremy Plüss: We have been recording some songs including our new singles “Lover” and “Get Down” in a studio in Berlin. The time we had was magic for us and we’ve met some really nice people. The city literary cached us and we decided the move there as a band. As it isn’t that far to the east-sea I was already making plans to persuade the band members to go for some windsurf trips to the spots in north Germany.

Continentseven: When was the band founded?

Jeremy Plüss: We founded the band in 2007. However we’ve met even before that time when we were playing at school band concerts.

Continentseven: How would you describe your music genre?

Jeremy Plüss: We are trying to create kind of a new modern surfer sound because we all like that good vibe life attitude which we’re trying to include in our songs. The ones we’ve released by now were pretty straight pop music, but we are writing on new projects which goes more and more in the direction of rock spiced with some hip hop groove – we call it “bounce rock” sometimes as we like that laid back groove feeling and fat lines by the bass girl Lia Low and keyboarder Round Rob.

Continentseven: Who writes the songs, the lyrics?

Jeremy Plüss: All music is written together in our band room in Berlin, it’s kind of a part of our sound: our music is spontaneous, jamming is a big part of the songwriting phase. Thomas, our singer, is writing the lyrics.

Continentseven: And your singer Thomas participated in the German talent show DSDS?

Jeremy Plüss: Yes, Thomas was there. He probably wanted the free ticket to Cuba, but finally he didn’t like that much. At the end of the day we’ve got some new fans so everything has turned out fine.

Jeremy Plüss: Actually everybody is windsurfing: Valentin and Thomas are pretty much addicted as me, Rob and Lia still need to gain their skills.

Continentseven: Which song was your most successful one so far?

Jeremy Plüss: We have released two records by now. Our most successful song though is a pretty new one “The Pitchers – Lover”. We’ve been on a radio promo tour in Switzerland and performed at “ZDF Fernsehgarten” show on Tenerife in March. The biggest show we’ve played by now was in Volkshaus Zürich in front of over thousand people.

Continentseven: Thanks for your answers and good luck with your band and your windsurfing career.

Geile Mucke !! I’m myself a musician and I can say that your music is very nice. You have a nice voice and the rhythm of the music grooves !!! Hopefully you earn much money !!

@b
I think the way jeremy does it and how they did the video is pretty cool! so please stop talking useless stuff!

toby
Reply to  b

i think this should be a music video not a windsurfing video 😉 its awesome to bring some windsurfing action in the music video! well done guys and a sweet song too