Jason Polakow rode tons of waves in his career and often took a lot of risk to surf waves with his windsurfing gear for the first time. It’s a dangerous game but Jason managed to survive all his massive attempts and bail outs. We had a chat with the wild Australian, who recently released an amazing video in which he conquered some huge waves at Jaws in February 2016.

“I’m always careful up there and I choose my time to go for it. It’s a big learning curve for sure and I’m always scared when pushing it, but I guess the reward is greater than the risk for me personally.” 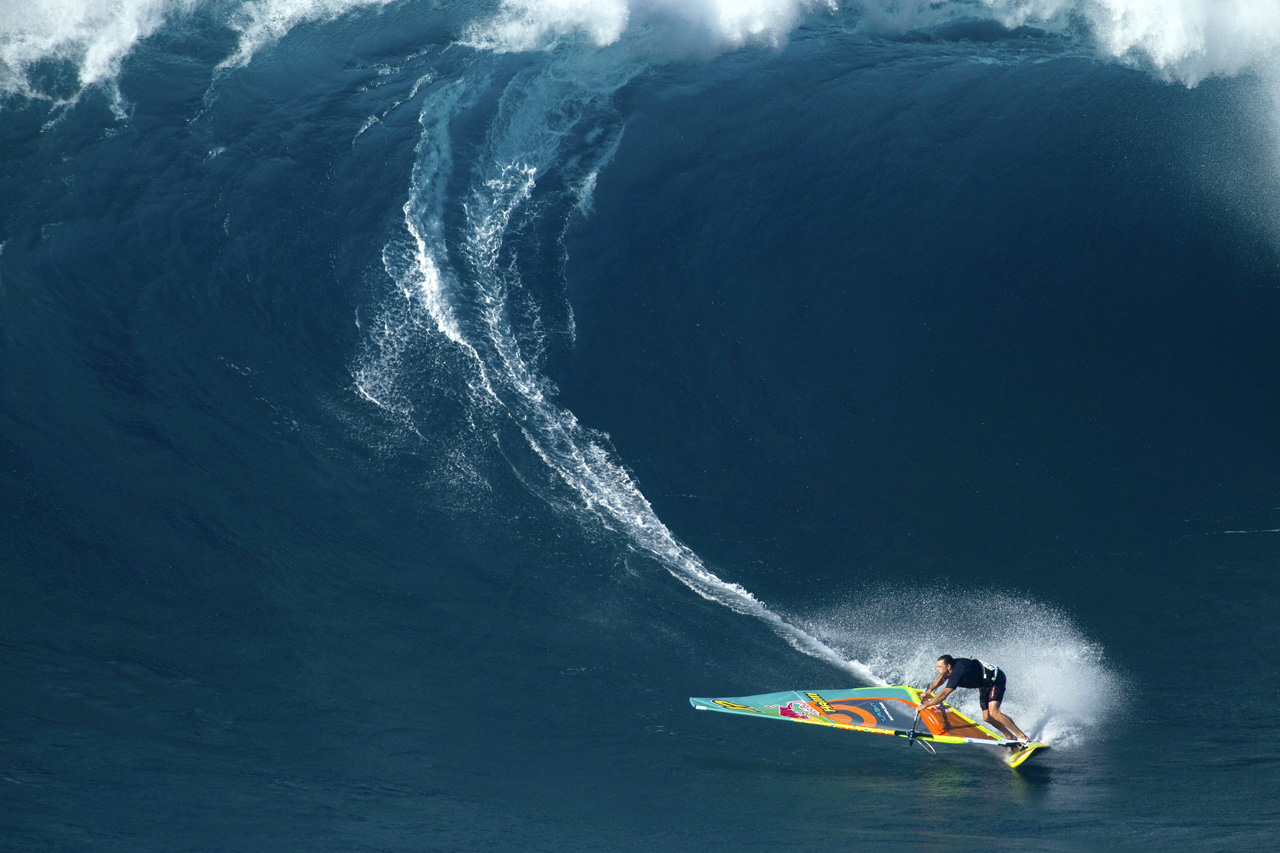 Jason with a radical bottom turn at Peahi Pic: RedBull

Continentseven: Is it possible to sail even more radical at Jaws?

Jason Polakow: You for sure can get more radical but the majority of time the wind is too east so it’s really offshore and hard to get radical as it’s just so windy on the face. The waves also need to be the right direction. If it’s too west it’s super hard as your basically cutting back with straight offshore conditions. If it’s too north the wave is kind of mushy with not a good wall to work with. The perfect set up is NE wind and NW swell with long period around 20 seconds. The last time I had it that good was about 5 years ago and that day you could really push it. I made a few aerials back on the wave and could cut back close to the lip.

Continentseven: Was it your best windsurfing at Jaws so far?

No it was not. Waves were super smooth as wind was ridiculously light. 5 years ago was my best day. Days like this are super rare but when all the elements align you can really push it up there. 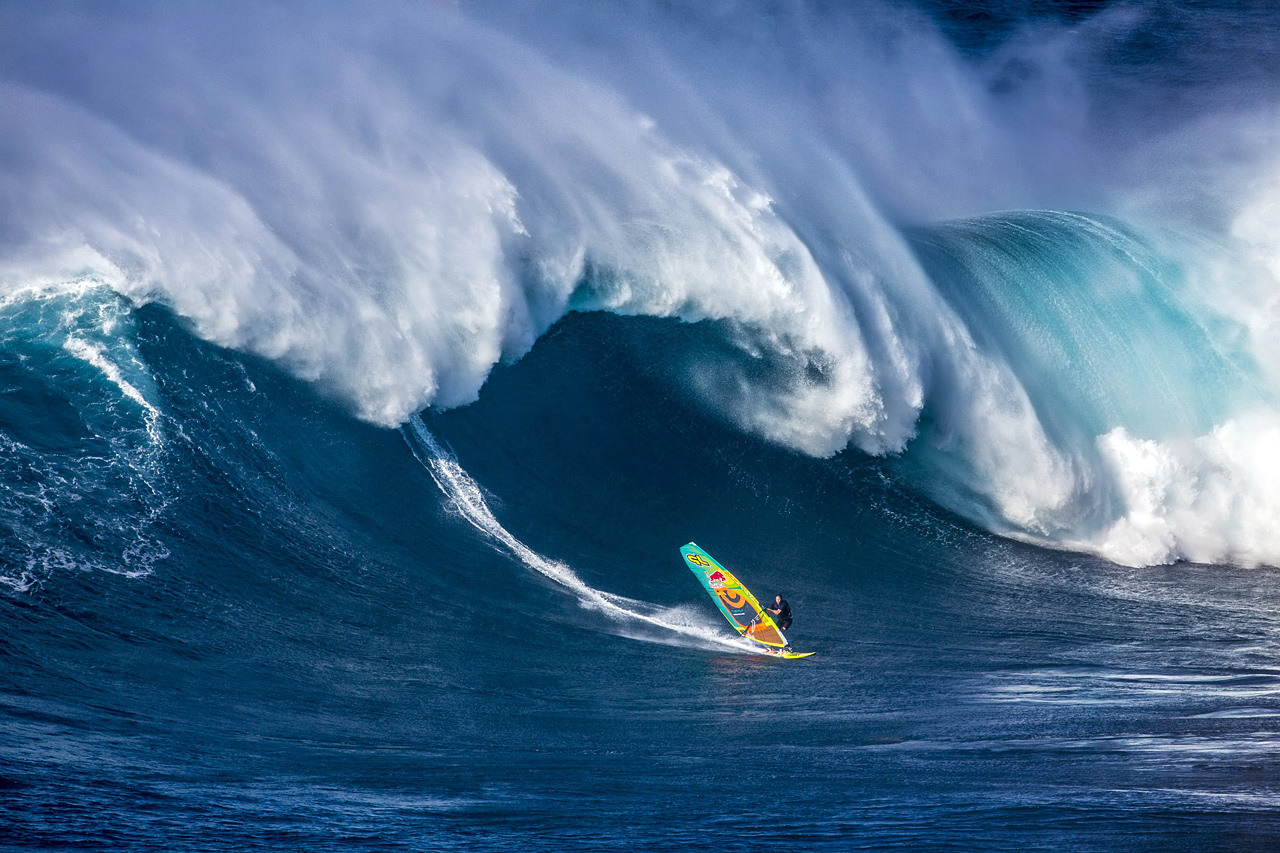 Jason on a big wave at Jaws during winter 2016 Pic: RedBull

Continentseven: What gear did you use?

I was using a 4.8m Fly and a 88L custom Jaws quad. I don’t really like to go bigger than 4.8 as it gets hard to handle at Jaws as so much wind sucks up the face of the wave.

Continentseven: How much is your age a limiting factor? For how many more years will you try to push harder and harder in big wave windsurfing?

Age is not a factor for me. It’s just a number. I feel just as good, if not better than I was in my 20’s or 30’s. I train hard and keep in shape and always try and push myself and set goals for myself to achieve. This is just how I’m built I guess.

Continentseven: Is Peahi still a really dangerous spot for you?

Jaws is super dangerous always. I got held under water for 3 waves a few years back before we had CO2 jackets and the wave was not that big. I was just in the wrong place at the wrong time where the energy of the waters pushed together creating a void or air pocket I could not get out of. I’m always careful up there and I choose my time to go for it. It’s a big learning curve for sure and I’m always scared when pushing it, but I guess the reward is greater than the risk for me personally. 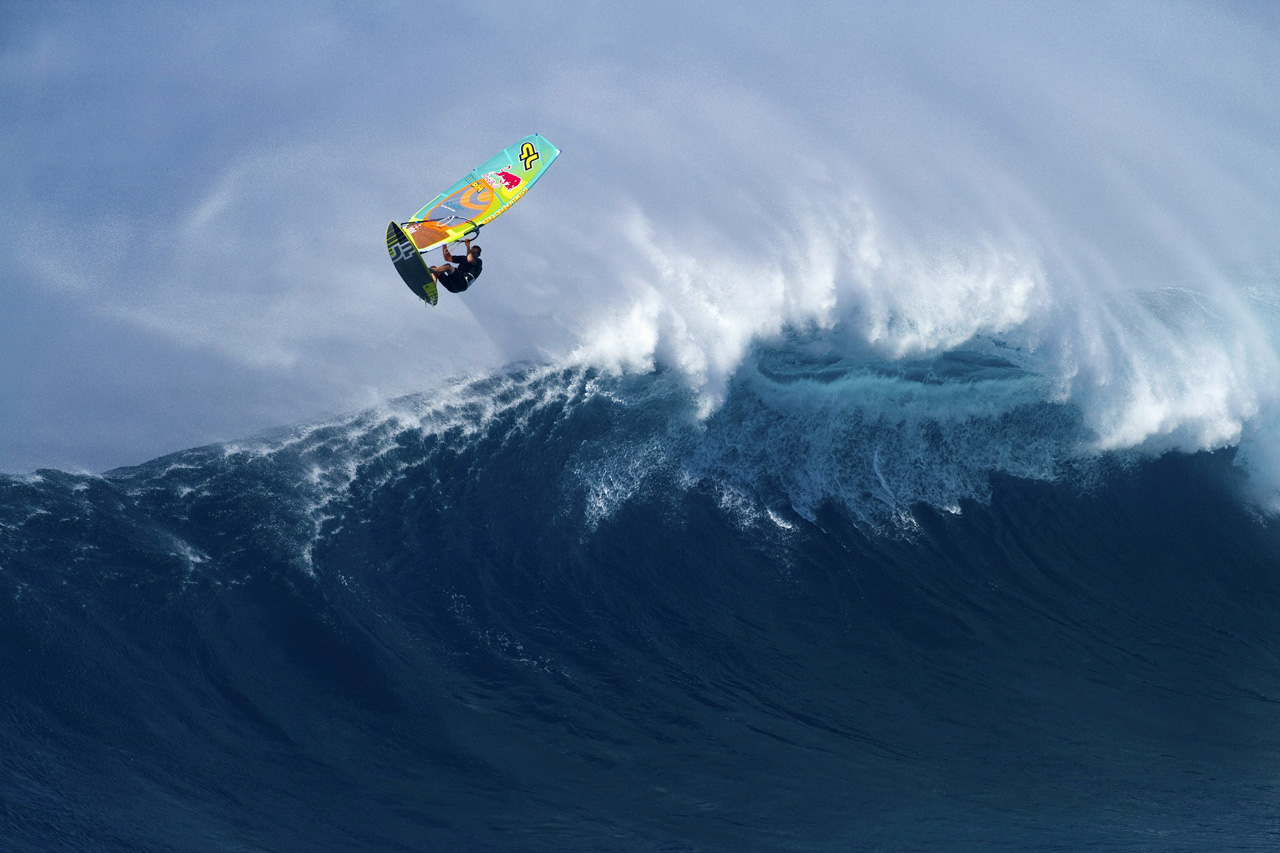 Continentseven: How difficult is it to land an Aerial in the wave at Jaws?

Landing aerials is possible for sure but you need the right wind direction. When there a a lot of east in the wind then it’s super hard as the wind funnels up the face and blows you out the back. Even riding the top of the lip and projecting out as the lip falls is super tough as the same thing happens. If the wind is NE that’s the perfect to try and land back in. I missed two swells this year at Jaws that had good NE winds. I was in Australia for the first and the second was during the photoshoot and Thomas T was up there and he did some sick Aerials. He is so good at Jaws. Love to watch him there. I really wanting to do a big Aerial on a large set wave and land back on the face. Thanks my goal for this winter.

The risk is that day was sitting on the impact zone and not getting caught inside. Kai Katchadourian and Robby Naish were on super big boards and catching sets on the outside. My board was too small for that so I had to sit on the impact zone. I prefer to take the risk and sit in a dangerous place and have a board that turns better rather than having a big board that is stiff and does not turn well. I did however get caught inside that day and got moved by a 20 foot bomb set. 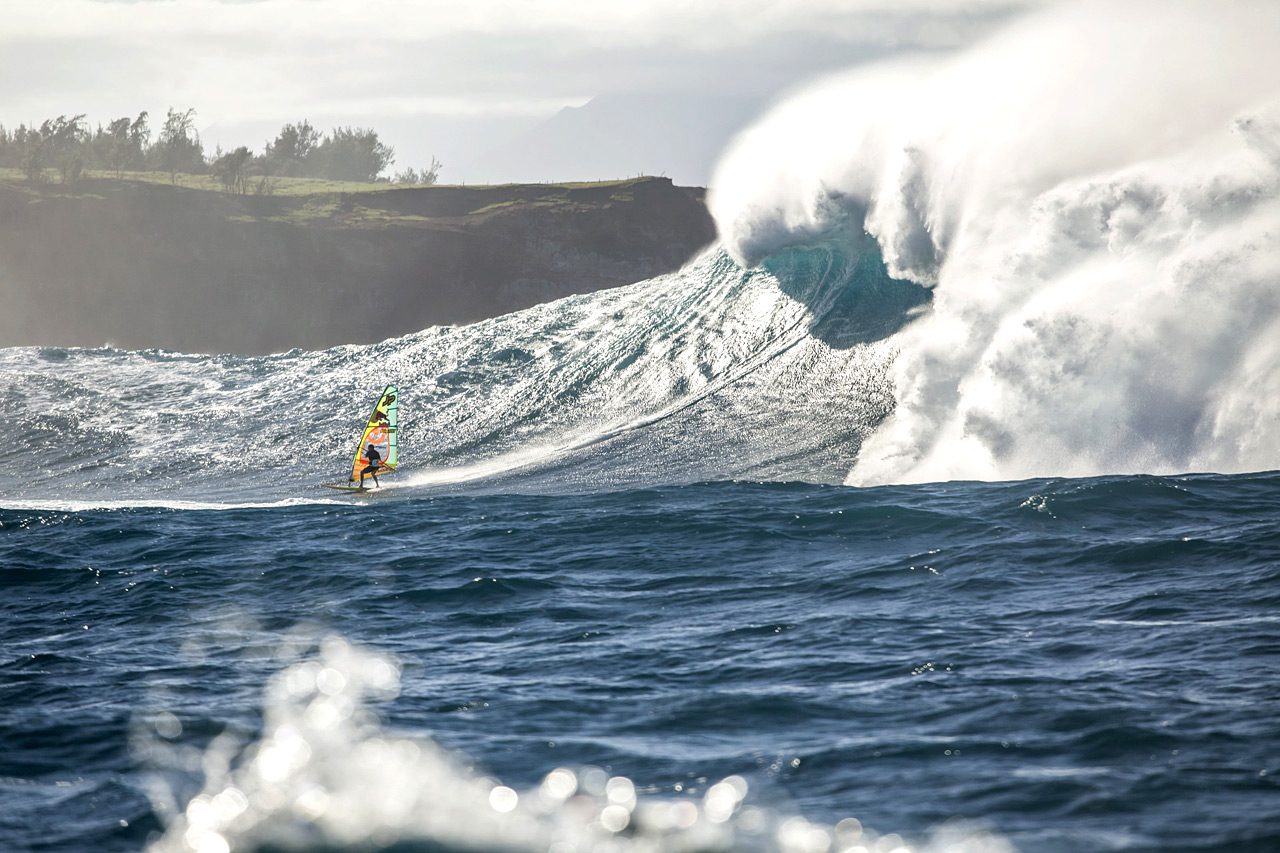 Jason on a huge monster at Jaws Pic: RedBull

Continentseven: It was a successful winter for you. No new injuries. The successful Nazare project, the Jaws video. What comes next?

I’m planning on going to a new big wave in Indonesia. Can’t say much now but should be a great project if the waves and wind cooperate.

Continentseven: How do you see windsurfing at the moment. Is there a growth? Is windsurfing back in the pool of other board sports?

It’s hard to say weather we have growth. At best I think the industry is trying to keep what we have now. We may never have the weekend warriors back in large amounts but I think the core sailors are loyal and love the dynamics of our sport. We have a solid amount of events on the tour and would be great to improve our national events so kids have the opportunity to compete in events close to their home towns. When I watch kids like Philip, Ricardo and others sailing it inspires me to get out there and go sailing so I’m sure small kids watching the guys do crazy stuff motivates them to give windsurfing a go. Right now the WSL surfing tour has really blown up and they are definitely on another level. Guys are getting million dollar contracts. It’s so crazy, but I’m happy for the sport of surfing. I feel that if we keep pushing our sport with the videos, more national events and keep showing the world how amazing windsurfing is we could get a resurgence in growth. Being positive is a choice! 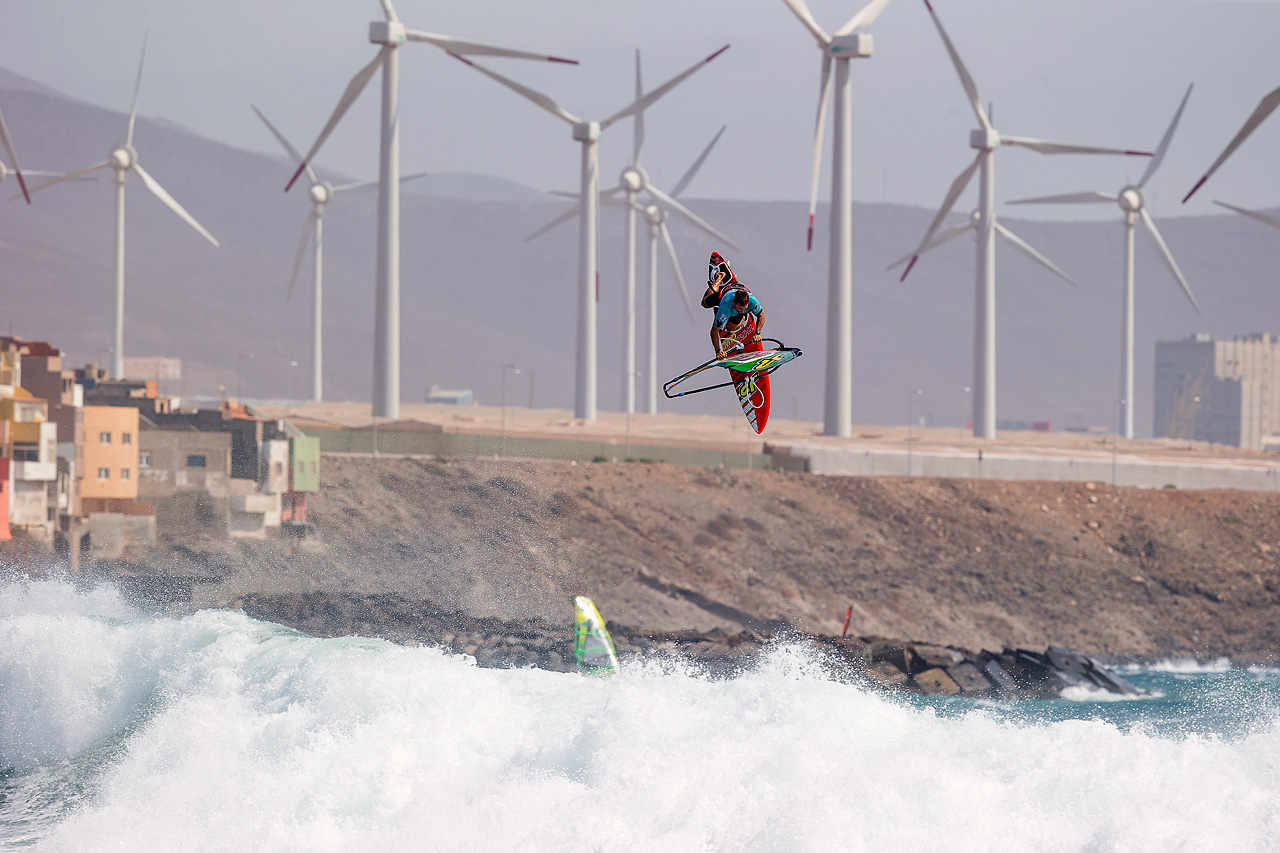 Continentseven: Do you still follow other pros life in windsurfing or do you focus 100% on your projects?

I love to follow the windsurf events. I’m constantly texting Robby Swift who is sailing the best at Pozo, how he is doing etc.. I always look at the feeds and follow the scoring when my mates are in heats.

Continentseven: Who will win the European Championship in football and who will win at Pozo 2016?

Football champion I have no idea. The win will be Phillip then would be good to see Braw in the final as I think he is the best sailor in the world if you take all tacts and conditions into account. I hope Robby Swift will be on the podium, too. 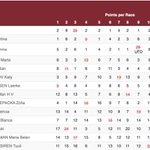