Jamie Howard is a 18 year-old freestyle windsurfer from the UK, who was in Brazil the last two months and brought back a pretty nice high-level freestyle clip. Jamie: “I was in Jeri for 8 weeks training. It was my first trip there and it was incredible! I couldn’t believe how consistent the wind was, I was on a 4.5m sail or smaller pretty much every day! I had a lot of new moves and stuff that I wanted to learn. I have plans to compete next year so it definitely will have helped towards that!”

Watch Jamie’s nice clip and if you want to know more about Jamie, just read our short interview below. 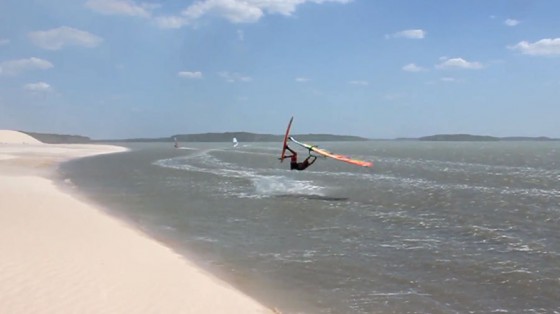 Continentseven: Where are you from and what is your homespot?
Jamie Howard: I’m from Eastbourne on the south coast of the UK . It’s a pretty sick place to live as you get a good variety of conditions! From bump and jump good for training freestyle in harder conditions to full on wave sailing at the secret spot!

Continentseven: Jamie, when and where were your first steps into windsurfing?
Jamie Howard: I started windsurfing with my dad when I was 7, but first discovered freestyle on a family holiday to Dahab when I was 14 . I’d never seen anything like it and was completely blown away!! I thought it was awesome how much style some of the locals had on the flat water! I bought an old freestyle board from one of them and started to learn to vulcan and just went from there! I just love the feeling of landing a new move for the first time and it kept me super motivated to learn more!

Continentseven: You are U20 UK freestyle champion. Do you have any ambitions to compete on international level, too?
Jamie Howard: Yeah, hoping to do some PWA events  next year if possible. Even if it is just for one or two rounds I think it would be an awesome experience and would also get my name out there a bit more! It would also be pretty cool to do some EFPT if i get the chance.

Continentseven: Where do you see yourself in 5 years from now?
Jamie Howard: In 5 years I’m sure I’ll be doing a lot more waves as well as freestyle! Hopefully, windsurfing and traveling around the world to sick locations! It would be cool to be doing well on the PWA freestyle tour but as long as I am still in the industry and having fun thats all that matters!