Jaeger Stone wins the 2019 Red Bull Storm Chase. Magheraroarty Beach in Ireland was the place to be on Tuesday March 12. Wind speeds of 121 kph and eight metre waves battered the Irish coast. 8 of the best wave windsurfers travelled to Ireland to challenge storm Gareth.

“It was absolutely insane to compete in these conditions. It was ballistic, massive, and freezing. Winning the contest feels unreal, and it still hasn’t sunk in yet – I’m still just trying to warm up my hands!” (Jaeger Stone about his victory)

1. 8 world-class windsurfers travelled to Magheroarty Beach in County Donegal from all corners of the globe, to take on the full force of a massive North Atlantic storm. Jaeger Stone, on of the riders who travelled the most miles together with Robby Swift, braved the elements the best and managed to take the victory in his first participation. 4 times wave world champion Philip Köster was leading after the first competition day but Jaeger managed to take the win in the end. Completing the podium is Leon Jamaer from Kiel, Northern Germany, who liked the conditions a lot and was well prepared bringing his 3.0m to North Western Ireland.

2. The competitors and crew waited over four years for a storm sufficient enough to compete in. Storm Gareth was exactly the storm they were looking for.

3. The riders were judged on jumps, wave riding and execution of moves. During each heat, riders collect points for each jump and wave ride – at the end of competition, they’ll receive points on a 1 – 10 score for their top five scores from each category. A five point bonus will go to the single biggest jump of the entire contest and five points for the best wave ride. 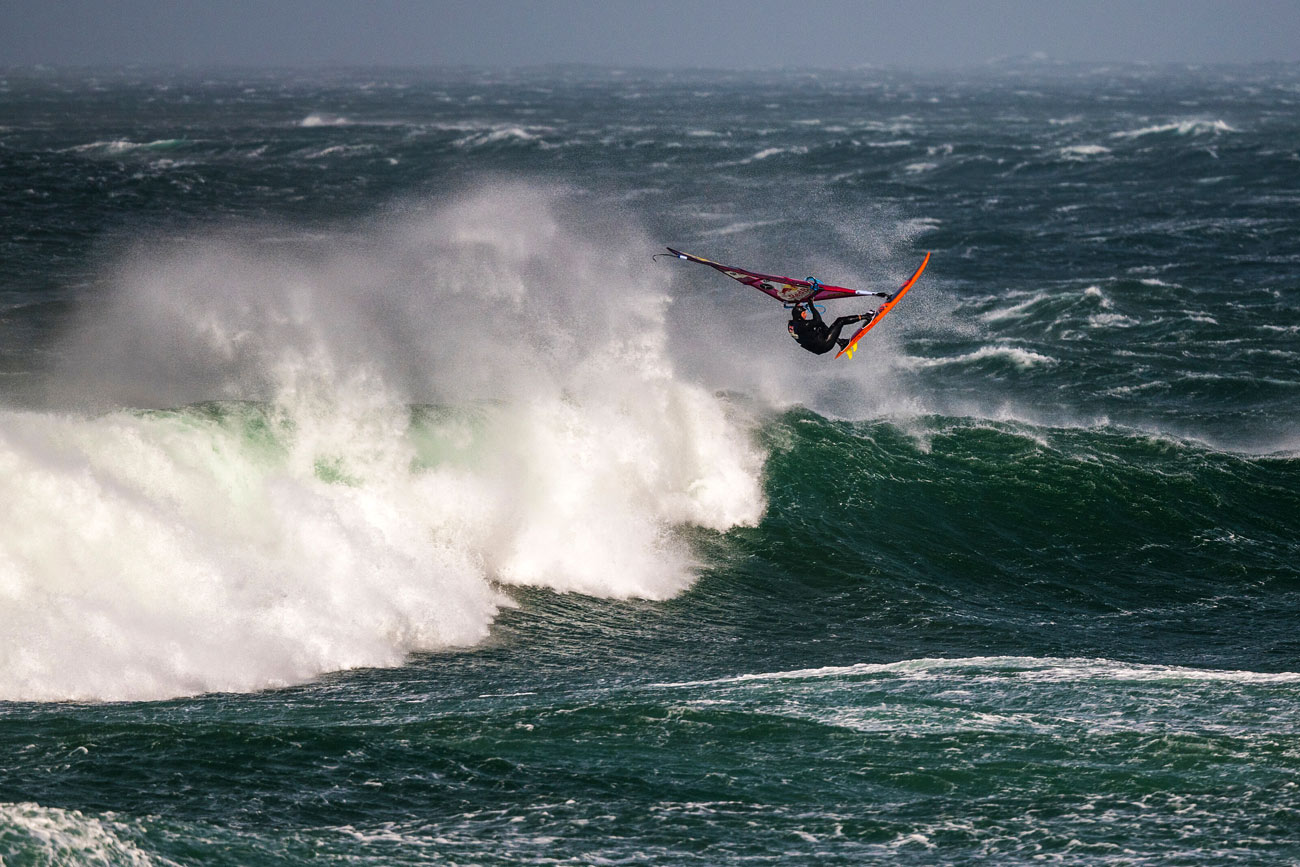 Leon Jamaer jumps with a big Aerial on the podium.

4. The riders took part in a warm-up day on Saturday, and a first day of competition on Sunday, but the harshest gusts were saved for ‘Big Tuesday’ when the winner was crowned. The storm and the swell hit the coast at Magheroarty Beach really hard.

5.  Philip Köster, who was leading after the first day could not hold off Jaeger Stone. For both riders it was the first participation in a Red Bull Storm Chase and both made it on the podium. Ricardo Campello participated for the first time in his career, too, didn’t make it on the podium, but managed to show some of the hardest crashes!! 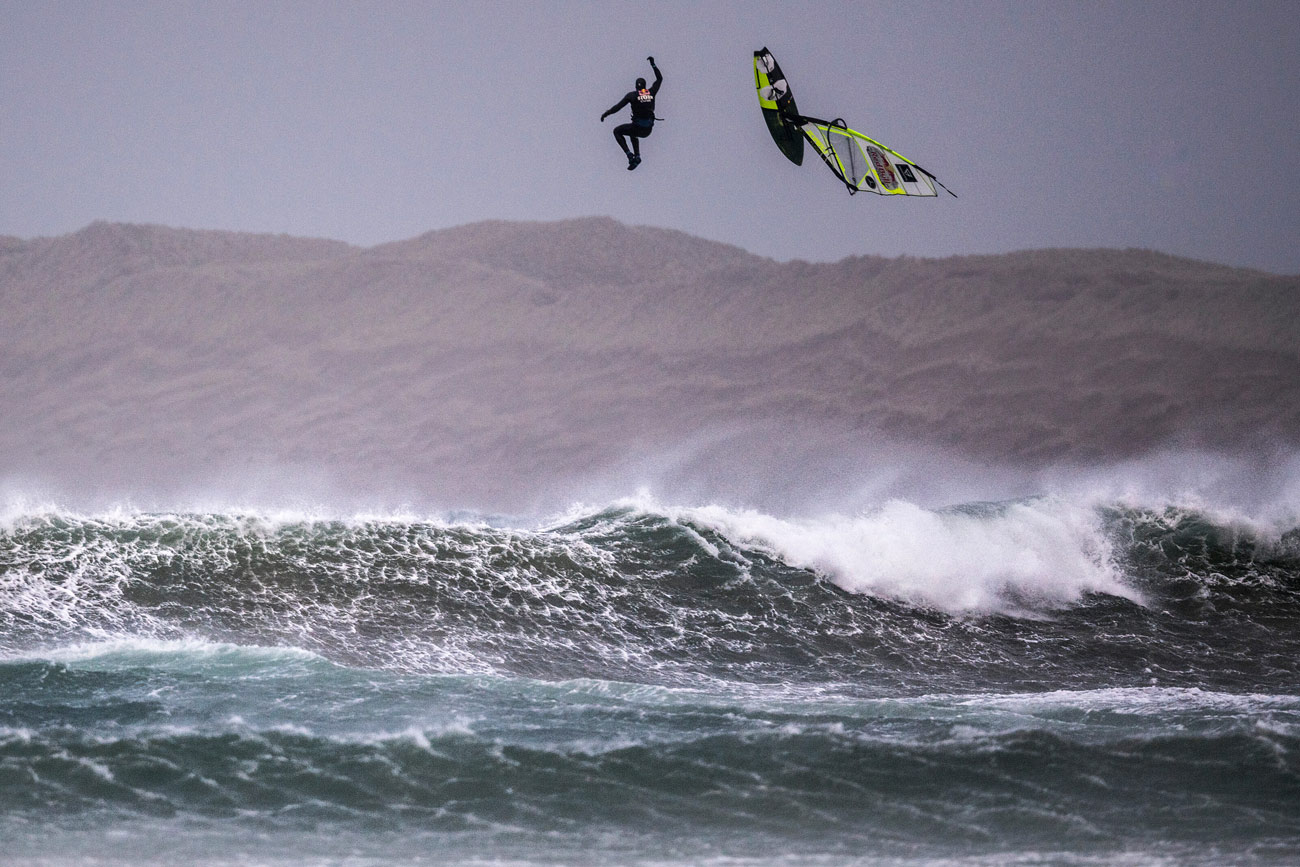 6. The 8 riders headed out in pairs for 20-minute heats, but as the wave size increased and wind direction changed, they moved to another part of the beach for one final round of short heats – with winds gusting to 131kph.

7. Highlights from the water included a nearly-landed double Push loop crash from Ricardo Campello, an incredible Air Taka from Köster and several seriously large Aerials off the lip from previous event winner Thomas Traversa. But none of them put all the points together to keep Jaeger from claiming the title of Red Bull Storm Chase Champion. Jaeger’s multiple solid wave rides and jumps, along with a biggest wave hit bonus, sealed the deal.

8. A helicopter and a safety crew team on jet skis kept the riders safe. Luckily the most extreme windsurfing event saw no injuries!

9.  Sports Director Klaas Voget stated: “Over all the Storm Chases we’ve done, this was the hardest – the conditions were radical, and it was just so cold. Temperaturess were just 5º. I didn’t think we’d see such high-performance sailing in these temperatures. That was impressive. And finally, today was the windiest day that many of these guys have ever sailed in.”

Congratulations to Jaeger the Juggernaut! After this mayhem Pozo will be like a laguna beach park, ha-ha…