Irish Slalom Series 2010 – Round 1 at Newtownards

The first round of the Irish Slalom Series was completed at Newtownards Sailing Club at March 27th – 28th 2010.  The overall event win went to Pearse Geaney (MauiSails / RRD), who sailed consistently in winds gusting up to 30 knots. A poor forecast may have dampened spirits in the run up to the weekend, but come Saturday morning, the wind filled in for what turned out to be a great weekend of slalom racing for the near 60 entrants. 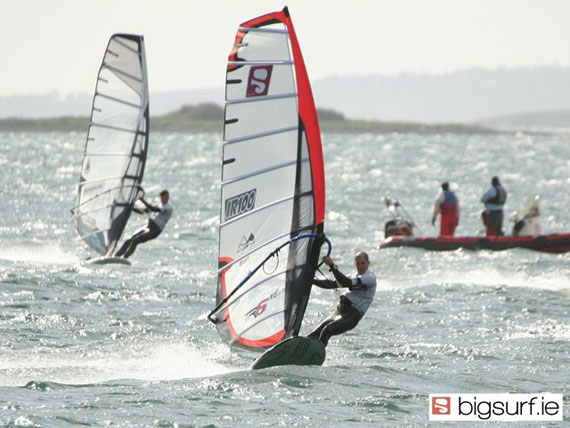 Race Officer (OD) for the year Ciaran O’Brien laid out a 6 buoy downwind slalom course with the help of the Newtownards Sailing Club (NSC) boat crew. The OD positioned the start at the opposite end of the course to the launching area. This excellent decision provided many advantages including; more room behind the starting line, cleaner wind and also it made competitors think about the tactics involved in the race starts. The spectators and camera crew also benefited from the close action of the 45 sailors screaming into the first mark.

Gold fleet racing kicked off with two full rounds of heats on Saturday morning. This meant that only 50% of the fleet were ever racing at the one time. The heat structure allowed for world class racing, removing the chances of competitors being the victims of dirty winds. Once two rounds were completed, it was decided that 5 back to back “all-in” races could be run in the afternoon with winds ranging from 20-30 knots. The action on the water was spectacular, with high speeds, dramatic turns at the marks and “drag like” starts out at sea racing towards the club house. The pace was very fast in the afternoon with current Champion Pearse Geaney and Maurice Owens fighting it out for podium position. Other top five contenders included newcomer and local sailor William Revels, the steady Hannes Louette, Fintan Day and current Grand Master champion Chris Loughridge. 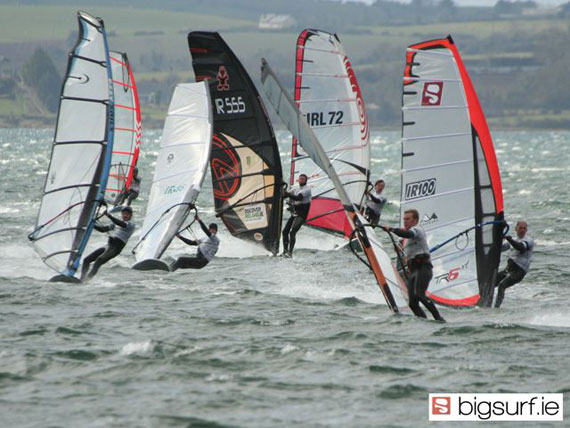 As the tide dropped and more beach revealed itself, the silver fleet took to the water for a simple out and back format, 11 races were held in total with John Boyce stepping up to the mark coaching and encouraging the entire fleet who were feeling the effects of the winter water temperature. Standouts in the silver fleet included the youngest sailor, John Patrick Fletcher, all three ladies, Alessia Stocca, Laura Macauley and Rebecca Fletcher, but it was Kevin McGuinness, Aidan Granfield and Gary Pope who took the top 3 positions in reverse order.

Saturday night kicked off with a banquet buffet in the sailing club followed by the 2009 prize giving. The 2009 champions received locally handmade windsurf trophies. A special annual trophy in memory of Alan Harris was created for contribution to windsurfing in Ireland, a cause for which Alan was a driving force. Fintan Day one of the longest standing Surfdock team riders proudly presented the trophy to Danny Mulryan. On a charitable note event organiser Paddy Lyner raised £330 for windsurfers4cancerresearch through a raffle were a deserved Alistar Nichol won the latest DVD “Trictionary”.

Sunday dawned with yet again more bright and breezy weather – much the dismay of a few people. Some bodies were not to cope with the previous days of action, this early in the season. Nevertheless a slightly smaller gold fleet took to the water to complete five races to total eleven races and give an all important 3rd discard. A Master blaster where by the entire fleet followed a rib across Strangford Lough and back, signalled the end of what was a great weekends racing.

The Slalom racers made also a trial run, where they were using a GPS device, so you can check out their runs here.

More infos and full result you can check out on www.irishslalom.ie.

Come join us for Round 2 in the world class venue of Brandon Bay.