Ireland – a film by Jamie Hancock

Ireland is the latest film by UK windsurfer Jamie Hancock. In the last years Jamie put his focus more and more on filming, flying drones and editing. Besides his filming ambitions he of course finds time to ride waves. This time he travelled together with Timo Mullen, John Carter and James Cox to Ireland. We love the atmosphere Jamie produces in his films. He transports the raw feeling of non competitive windsurfing. Thumbs up Jamie and crew!! Let’s start a trip and discover new places.

Jamie Hancock: “We travelled to Ireland twice on a couple of decent forecasts. I absolutely love these trips and managed to pick up the camera and also fly the drone when I was out of the wetsuit. I even convinced Timo to film me, that was until I had a couple of good waves and he ditched filming duties and came and joined me. Thanks to Stenaline for helping us with our journey!”

In addition to the film we hooked up with Jamie to speak about his latest film and Ireland. You can read the interview below the video.

Jamie Hancock in an interview about the Ireland trips

Continentseven: When did you travel to Ireland to produce that clip and who were your travel buddies?

Jamie Hancock: For this video we went twice. I travelled with Timo first in September by plane from Bristol airport in the UK to Dublin and then a second trip in December with Stenaline ferry with Timo, JC and James Cox.

Continentseven: Did you go on forecast?

Jamie Hancock: We always go on a forecast. All these trips are very calculated as we want to get the best possible conditions. In the past we have sometimes gambled a bit on forecasts and have been left skunked… we still don’t talk about those trips.

Continentseven: You produced a lot of films about travellin in the UK. Is it hard to re-invnet a similar story again and again?

Jamie Hancock: I haven’t actually made a video from any trips to Ireland, they have mostly been from Scotland. On these trips it is what it is, there are no filming plans. I just pick up the camera when I’m off the water and try ask one of the boys to film me in return at some point (easier said than done). Every single trip is different, there are literally hundreds of very good windsurfing spots all over the UK and Ireland so it will never get boring. If I lived on Maui or somewhere then yes it would be difficult to keep making windsurfing videos at Hookipa, but here we don’t have that problem. It is just a lot harder to score good days on the water with the filming conditions also being way more difficult. 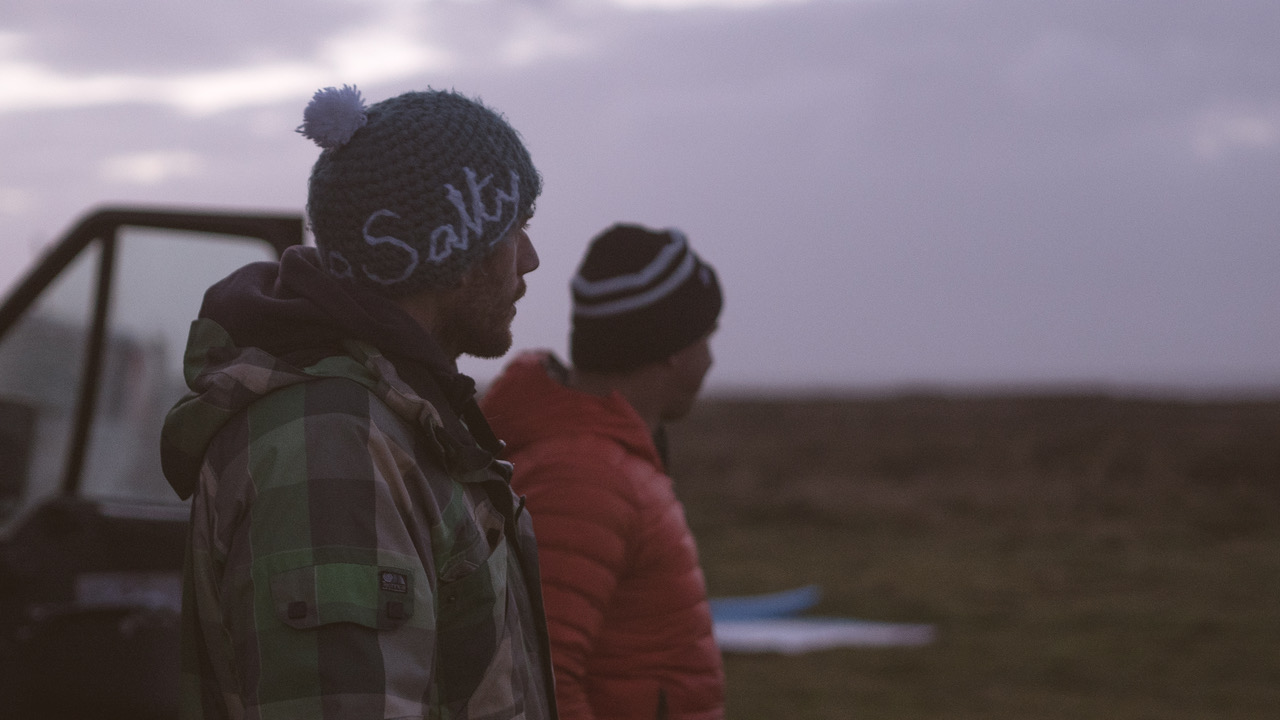 Continentseven: What makes Ireland so special and what are your top three spots you always would visit on a trip?

Jamie Hancock: Well the storms that generate our wind and swell from the Atlantic hit Ireland first and the hardest. The whole of Ireland and Northern Ireland have breaks all along the coastlines. Ireland is not a very tourist friendly place. It’s stunning but the weather is unpredictable and not too tourist friendly and outside the water there isn’t too much going on. So the general breaks are not packed despite being world class, and that is for surfing. For windsurfing it is even less people. I don’t really have a top 3, anywhere in the NW Ireland is great and Brandon Bay (where the Red Bull storm chase was held) also has a nice set up for windsurfers.

Continentseven: What’s the most used equipment in Ireland?

Jamie Hancock: Literally anything. That’s probably the worst thing about Ireland, what gear to take. If we take the ferry then we can generally take everything with us, but if we fly and have to pack light then it gets a bit tricky.

Continentseven: Waves and wind can get gnarly at Irelands west coast. We guess a good windsurfing level is important to survive in that conditions?

Jamie Hancock: Yes, but not as much as you think. Because Ireland has so many windsurfing spots, there is usually always a safer more sheltered spot somewhere nearby. One of the breaks in the video was Magheroarty. While we were sailing the logo high reef break there was a Peter Hart clinic at the beach break (which is also fun to sail) from where we launched. You can see with the drone in the beginning of the video at 0.34 and 0.45 that there is a large flat water area behind the parked cars. So if the reef is too big and the beach break is too difficult then they guys can go to the flat water and do speed runs and flat water stuff. 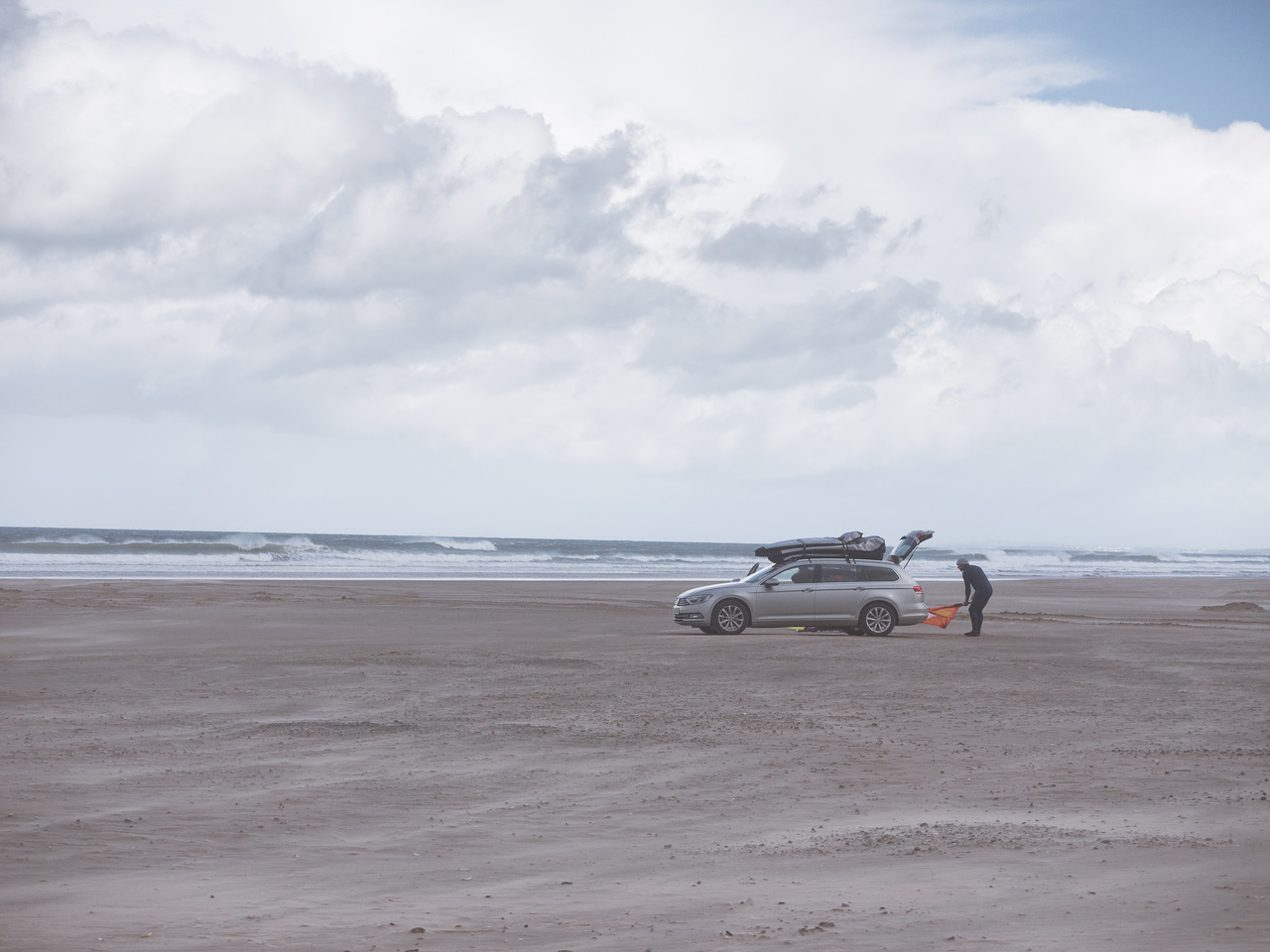 Continentseven: How popular is windsurfing in Ireland and do the surfers respect our species?

Jamie Hancock: The Irish are a friendly bunch so there are never really any problems. I don’t think there are enough windsurfers to bother the surfers anyway. There is also a lot of respect amongst the surfers and windsurfers too I find. The surfing culture is growing in Ireland all the time and guys like Timo and the other main Irish guys have been windsurfing all before that.

“Stepping into the unknown is equally as important, it is what keeps the fire burning.”

Continentseven: You are off the tour for a while. Do you miss it or is a trip to Irelands much more fulfilling compared to a World Cup participation in Pozo for instance?

Jamie Hancock: Yeah I miss it but I much prefer these trips. It just never gets boring and there is nothing else in life that comes close to the amount of fun we get on these adventures. My priority has been to work on promoting GA / Tabou more in the filmmaking and marketing than just myself as a rider. In this modern day though as important as it is to have the world tour, it is really good to do these types of trips and to produce videos and write magazine articles. It is important to inspire people to windsurf. The world tour definitely does that but loading up the car and stepping into the unknown is equally as important, it is what keeps the fire burning.

Jamie Hancock:  As for trips planned I’m always looking. In the meantime I’m preparing some pretty rad 2018 Gaastra / Tabou videos that are due to launch in a few of weeks. Make sure you check them out via the GA / Tabou Facebook and Instagram pages!

Nice vid,Jamie. Keep the windsurfing flame burning. If we only have to think how much we pay and give for free and how much we get in return, we should be dead and gone by now- long,long time ago…

I like the video. Everything is nice about it, especially the music. But how could you still steal music for promo-videos, especially when you’re doing this as a (so far) professional business, which the publisher is doing? I mean, he should know since he is in the business. Your can’t be that clueless. It’s not the 90s anymore. It’s windsurfing, we all know that, and windsurfing seems almost dead but music publishers don’t care. It’s not only lame to use unlicensed material (what would you think of using your personal video-art for my personal business without telling you?) it is… Read more »

John, Seeing as your post is publicly directed at me I will give you an honest reply. It is incredibly complex and difficult to put the music licensing into any specific category. The simple version would be profit and non profit, for which this is the latter… I personally have a monthly subscription to Soundstripe and an annual subscription to Art List who provide licensed music for filmmakers. I also have used Audio Network, Premium Beat and Musicbed numerous times in the past for licensed music. I use these for the exact reasons you listed in your post… The difference… Read more »

I feel sorry for you @Jamie that you are faced with such allegations and inconveniences. I think nobody will be distracted from your stunning work and effort you put in this video. There are always begrudger…

I am visiting Ireland in Summer with my girlfried for 4 weeks with my camper. We are looking so much forward to the beautiful landscape and surf. Thanks for this amazing video, the best i’ve seen online since a very long time!

Awesome, I’m sure you will have an amazing time. If it looks like there could be some wind and you’re not sure with where to go then get in touch and I can help. Even better, I will see you there!

Hey Jamie, wow, that was a long answer and I’ve totally expected almost every single fact. I’m home the two, well three departments, music and video, and the “water-funsports” and I totally do understand your point of view and especially the frustration about not getting paid for prime work and looking for good music. The music sometimes make 80% of a good clip, we all know that. Your work is good! And I’m not here to accuse you for being a thief at all or check on your other videos, I’m sure this is all fine! You got me wrong… Read more »

John, sampling/borrowing/plagarism/collage (whatever you want to call it) has been a part of art since art began. I recommend you to read “Ecstasy of influence: a plagiarism” by Jonathan Lethem: https://harpers.org/archive/2007/02/the-ecstasy-of-influence/ Here is the start: All mankind is of one author, and is one volume; when one man dies, one chapter is not torn out of the book, but translated into a better language; and every chapter must be so translated. . . .—John Donne love and theft Consider this tale: a cultivated man of middle age looks back on the story of an amour fou, one beginning when, traveling… Read more »