Interview with Steve Allen – A season without sponsors

Steve Allen, multiple World champion and Australian champion in the racing disciplines of Slalom and Formula windsurfing, has influenced the sport of professional windsurfing a lot. He invented a combi wave move, the tabletop forward loop. After a more than 17-years long career, a very successful participation in a dancing show in Poland, the Aussie, who lives in Poland, came to a conclusion for this season: “I will buy my windsurfing gear.” 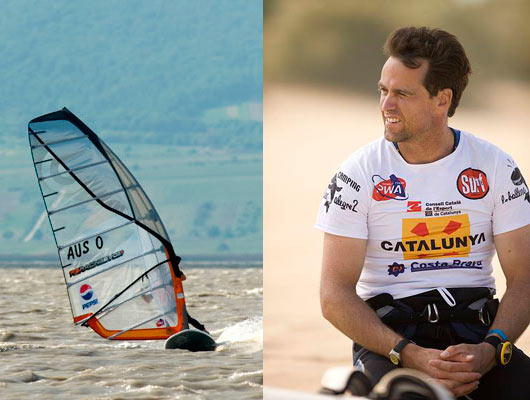 C7: Hi Steve, how was your wintertime?
Steve A.: Too long as it was the first time that I spent the whole winter in Poland. Never again. I miss to much the sun and water sports.

C7: You missed the last two events in Alacati and Sylt because of the participation in the “Polish dancing stars” TV show. Was it worth to miss the events?
Steve: Well, I have been competing for so many years now and I have missed many events due to injury in the past. So I think it was a nice opportunity to do something different and maybe help me gain more sponsorship outside of windsurfing. Which has not yet happened but I also made quite ok money for each program that I passed.
I was also really upset with Gaastra and did not feel like competing for them any more anyway. As I had about 15 mast+ that I broke that they never replaced and just charged me for the masts I ordered to replace them.
Plus suggestions I gave for material that was then made for Ross and myself they gave it just to Ross, they would charge me for development sails/boards to not pay my salary, then the last straw was when I was going to go for the Turkey PWA event, that they did not replace my broken slalom board from Fuerte that they had over one month to get to me. That was the main reason I missed that event.
I also thought this program could be great promotion for windsurfing and my sponsors as it is viewed by over eight million people and they showed me windsurfing on many programs while on one dance I started by windsurfing across the dance floor with a skate board underneath my wave board. But Gaastra did not like it and cancelled my last 3 months salary they say as my ranking became so bad in slalom. But if they sent me a slalom board to compete in Turkey on then I could have discarded Sylt to still have a top overall ranking with a good result in Turkey.
Gaastra also did not pay my first 3 months salary last year as they said my equipment budget was that much over from the year before, that my contract had also already ran out for, and as I had to order more masts to replace broken ones.
I also ordered just the gear I needed to race on, ordering just sails and masts and I was over budget by 3 months salary. I then later found out that they doubled the price of equipment without telling me or razing my equipment budget.

As at Gaastra they give you an amount money for your budget for sails masts etc. to cover the amount of gear that you need to order to race on. So to double the amount the equipment costs without telling you is like to have a budget of 6 sails but then half it to 3 sails without telling you and still send you 6 but take the 3 sails more now out of your salary without telling you.
This and more was the reason that made me for the first time in my career just not want to compete at all, not to promote a brand treating me like shit.
So, yes, it was worth it even though I do not have one sponsor for this year, as I had a great time, made great promotion for windsurfing in Poland.

C7: Would you take part in the dancing TV competition again?
Steve: If another country would make me a similar offer, for sure I would do it as it would be 100 times easier now and if you lose in an early edition your life goes right back to normal. It is only if you pass each show to the end that it takes around 3 months out of your normal life.

C7: Did you dance so good that you finished in an excellent position or did you have an advantage being a windsurfer (you know what I mean)?
Steve: Once I finished 2nd on the judges scores but mostly thanks to the support from the people voting for me was how I got so far. I was far from being the best dancer but often made a very nice show which more important many times.

C7: You invested a lot of time in a new sport! Will it have a positive effect on your sailing?
Steve: Let´s see. I have also just had the longest break ever from windsurfing and on my first training this year I had never felt so weak but I was still fast with good racing tactics on our training races.

C7: When did you start the water training for the upcoming season?
Steve: In the end of March in Egypt with Wojtek, Pawel, Michal, Philip, Cuba and Martin.

C7: Will you compete in both racing disciplines, Slalom and Formula?
Steve: Yes, but I may not do the whole slalom tour. Depending on my results and equipment choose, as my gear may arrive just days or hrs before the first slalom event in Austria.

C7: Do you have new gear sponsors for 2009 or will you continue with the same like in 2008?
Steve: Well above you know about my 2008 equipment thoughts. For 2009 I did have some offers but not that good so I prefer just to buy my gear.

t have the chance to test it and think they make races in lighter winds this year with the new rule that every sailor should have big gear.

C7: You are a lighter sailor compared to the sailors, who were fighting for the title in 2008?
Do you see an advantage for 2009 for yourself, because there are many events, where we can expect lighter winds (Austria, South Korea, Costa Brava, Alacati and Sylt. Only two events have real highwind.) and will you fight for the Slalom title?
Steve: It depends how I go on the earlier events, but that was my idea with ordering the gear that I think is the best as I was never happy with the slalom gear from Gaastra/Tabou for my style.

C7: Is Slalom racing more exciting nowadays with the production gear and the limited amount of sizes or was it more exciting many years back, when there were no limitations on the gear?
Steve: I think it would be more exciting when the race directors did not care about the famous slalom guys and just ran the race on the rules. As they never push to race in really light winds, which could give the chance for many other sailors to win races. I don’

t think equipment rules change to much in the excitement of racing.

C7: Would you like to have the Formulaboard back on the PWA tour?
Steve: Formula has its own World Tour, so it does not really matter for me as long as there are FW events around the world with good prizemoney also.