CONTINENTSEVEN caught up with the German waveriding lady Steffi Wahl to talk about her victory in the German speed championships and her expectations on the PWA World Cup on Sylt. Steffi lives in Kiel in Northern Germany, has a degree in business management and has her own media design agency.  Since one week she is an ambassador for the WDCS, the Whale and Dolphin Conservation Society to speak up against the killing of whales and dolphins. Her surname “Wahl” is actually the german word for whale (I mean only the sound of course).

Her last wave competition was the PWA event in Pozo, Gran Canaria, where she got an excellent 5th place without much training time before. Now Steffi has a broken toe and is hoping for good conditions on the second weekend of the PWA World Cup on Sylt, Germany. 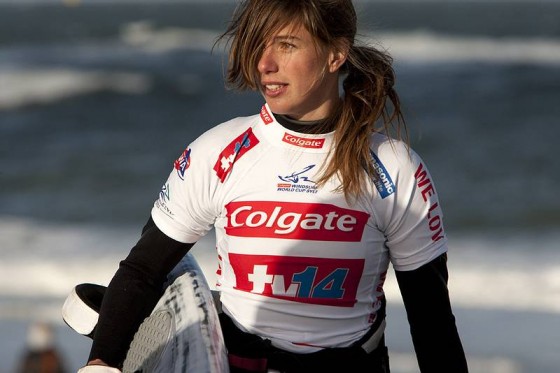 C7: The PWA World Cup on Sylt is just running. You know the North Sea conditions very well. What do you expect?

Steffi: The forecast is not the best, but I am still optimistic for the second weekend. End of September you never know. It can be real autumn with storms and cold and nice North Sea conditions, but it can be warm and calm on the other side.

C7: What are the main things you have to keep in mind, to make a good result here at Sylt?
Steffi: For myself I know that I like the shorebreak on Sylt, so surfing is not a problem. I really have to focus on my jumping! 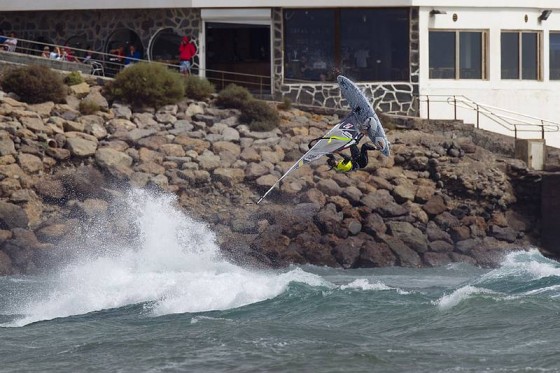 C7: You had an excellent result at the PWA World Cup in Pozo. Did you train a lot during the wintertime and spring?

Steffi: I did not train at all. I just had 3 weekends in Denmark before the event. Our winter was really cold and I had no time to travel to South Africa again… I went 2 weeks to France but it was more surfing than windsurfing. But still, surfing helps a lot for waveriding, so it was not that bad and I love surfing! I still need to improve my jumping, but for that I need steady conditions everyday, otherwhise I get scared. (unfortunately).

C7: How did it come, you are now sailing with “Patrik boards” ?
Steffi: Actually I always loved the shapes of Patrik Diethelm. I know him for ages now and I always liked the ways he approaches new shapes. He thinks a lot about boards and shapes and is a great windsurfer. Not only in slalom, in freestyle and waves as well. You should see him sailing in Australia in Margret River or up north… really good! So I think he knows really what he does! 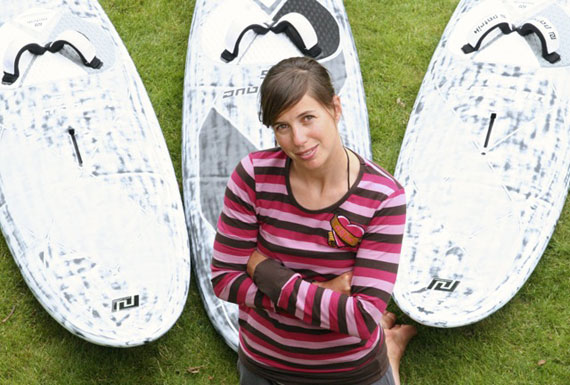 Will we see you now more often in the "fast" disciplines?

C7: Which models do you use?
Steffi: I use a Wave One 68 with the trailer fin setup. I tried the boards a lot with Karin Jaggi in Gran Canaria and it seems that this setup works best for my sailing. You are able to adjust the board to the conditions, that´s what I like the most. If you need a skatey board for onshore conditions, you got it. If you need more grip, you just change the fin setup and it works too… I like that concept!
I tried a 78l Trailer Wave in Hanstholm/Denmark in sideoffshore conditions on 3,7 and it was amazing how much control I had on that board even with such a small sail. That time I had no smaller board, so I just used that one and it worked for me as well.

C7: Are the boards much different, compared to the boards you have used in the past?
Steffi: I used the Rebels before and Patrik did them, so there are similarities for sure and that´s why I stick to Patriks Boards. 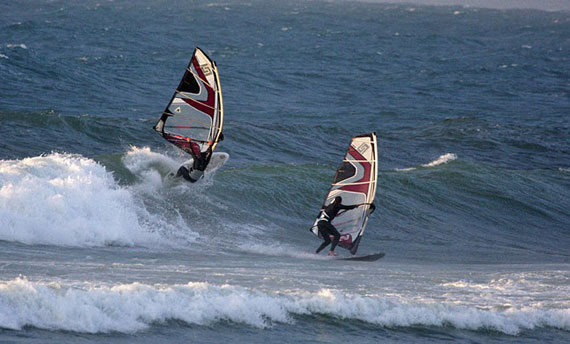 Steffi Wahl does a nice cutback at Hanstholm, Denmark

C7: You have just competed for the first time in a speed event, the German Championships and you immediately won. Will we see you now more often in the “fast” disciplines?

Steffi: Why not? Two weeks ago I tried my 3 year old speed needle on a tidal creek in the North Sea and sailed 39,5 Knots max. speed and 37 Knots on 5x10seconds with 6.0 Gaastra GTX. There was the guy from the German Speed association and he invited me to the German Championships on Fehmarn.
As I did not travel to Almanarre to the ladies Slalom event, I went there instead and we had 3 days of strong easterly winds and could sail 6 runs. I won 5 out of 6 runs and now I´m German Champion in Speedwindsurfing…that was quite amazing! But for sure I will go back on the tidal creek with better equipment and see if I can reach the 40 knots on 500m. That would be great! Unfortunately I broke my little toe quite stupidly on the stones there coming out of the water, so I could not go to Klitmöller to watch the PWA guys and to train a bit before the event here…. 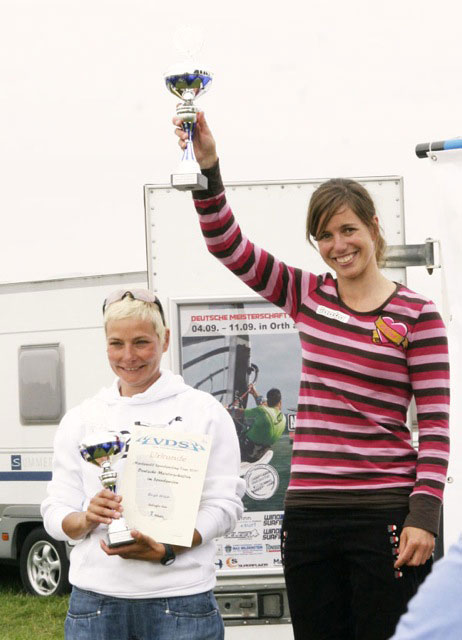 Thanks for the interview and good luck for the competition!

Hey guys. Don´t panic. Sure is Wahl not Wal. We meant it sounds the same actually, but I added this now.

Guy’s use a dict!

wale would be “Wal”