Interview with Peter Svensson about the Four Dimensions DVD

“I´ve been doing nothing but windsurf movies for the last 30 months now”, says Peter Svensson, the editor of the upcoming DVD Four Dimensions. Peter is a Swedish filmmaker and already well known in the windsurfing film business. His former projects were the “Jeri Diaries” for Club Ventos, “Life”, “Commited” and “Commited Reloaded”. Now he  just finished his actual project “Four Dimensions”. Read here, how Peter started to edit windsurfing movies and what we can expect from the “Four Dimensions” DVD. 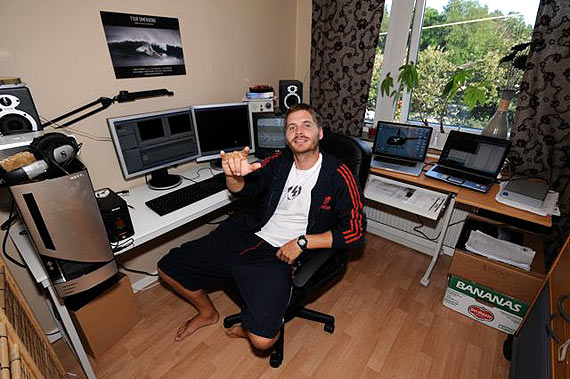 Peter Svensson in his editing office

Peter how are you these days?
Peter: Well, actually as I am writing this, I am exporting the final movie! And I can´t believe that we are done. Its been the only single thing I have done for 5 months straight, every awaken minute, normally 16-17 hours a day the last 2 months. It´s actually crazy to think about it.
Today Andre leaves Gothenburg to go back to Hamburg with the Master DVD, and it goes straight in to production. That means my job is over!:)

How did you start with editing windsurfing movies?
Peter: I bought a camera at university to film our student parties. After some beers you forget the camera, and it was not used at all. Then I brought it to Jericoacoara on a windsurf holiday back in 2005. Then I realized it was better to film windsurfing, then to pull the moves myself. I messed around with the clips on my computer and put some Beastie Boys songs behind it, and hey… this was fun. And that was basically the way.

You new project – the Four Dimensions Movie – how came this idea?
Peter: After my latest movie “life” I thought to take time off from windsurfing films for a while. Then Andre (Paskowski) asked if I was interested to fly double helicopters filming the best guys. I thought, well, this is probably the time to do it for real, once and for all. The project grew and we where planning new trips in the middle of the shootings, and the first 3 months we didn´t know where we were going the next week. This was just 1,5 months ago, and now the movie is now done :=)

Besides new angles and sickest action we might find some new editing techniques inside the movie? How much time did you spend to learn this techniques?
Peter: Yes. I thought that there was time to try some effects I have been working on for a while now. They have been used before by other editors, and I was amazed by them. I spent some late nights behind After Effects, trying to figure them out. Lots of trial and error, but in the end I think we started to get them right. I think there will be some pretty cool moments in the final movie, and I hope it brings another dimension to our film.

You have done now five windsurfing movies in a little more then two years. How do you find your motivation to keep being creative?
Peter: I´ve been doing nothing but windsurf movies straight for 30 months now. But the movies have been very different in terms of goal and customers, and I do feel a need to keep moving. If I would get stucked doing the same movie over and over, then I will stop. But as Four Dimensions went so big and we had a tight deadline, Sebastian Dörr has been a co-editor throughout the editing, and the motivation and ideas definitely increased with two editors.

Will you be the most nervous person, once the movie starts to play inside the cinema on Sylt?
Peter: Yes, I would like to hold hands with someone down there. Or I´ll sit on the toilet throughout the show. To be honest, I am very proud of the final movie, and I think I will be able to enjoy the premiere.

Tell us the best moment of the whole production process?
Peter: When me and Andre took off in 2 helicopters one afternoon filming Victor and Marcilio jumping at Camp one, Maui. The two best jumpers (not thinking of Köster for a while…) and two helicopters, all up in the air at the same time. Best hour by far.