DIETER VAN DER EYKEN. The Belgian freestyle windsurfer entered last year the PWA freestyle scene at the age of 18 and immediately finished on the 9th place in the midst of the best freestyle windsurfers. Maybe for some this was a surprise, for us not. We know Dieter since many years and can still remember when Marja, his mother sent us the first move of her son. Already at this time, you could recognize Dieter´s unique style and his determination to become one of the best freestyle windsurfers. 2010 he finished the freestyle tour on the 12th place overall. By now Dieter has become a fixed top 10 rider on tour and has improved his 2011 overall ranking, finishing on the excellent 8th place overall with his best result in Vietnam, where he got 5th. For 2012 Dieter has already set his goals. He wants to push into the top 5. Read more about his plans, the past competition season and new rules in freestyle in the following interview. 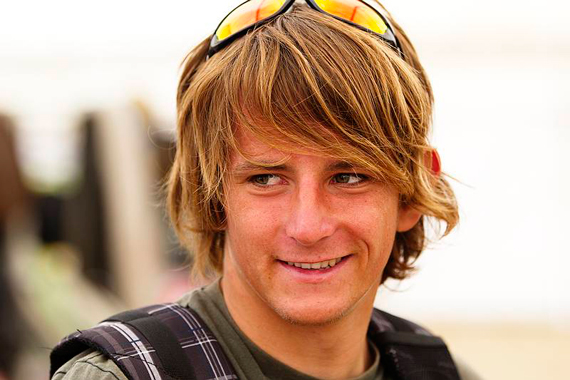 C7: You finished the PWA Freestyle Tour on the excellent 8th place overall this year and you could improve your ranking from 2010 by 4 places. Are you happy with your season and what were the reasons you improved by this 4 places?
Dieter: Yes, I’m super happy with how my season went in 2011. I got into the top 8, which is well into top, 10 which was originally my goal for this year. To be honest, in the beginning of the year I didn’t expect too much of it and was already taking a big risk to travel all the way to Vietnam with no winter training at all. But I arrived 2,5 weeks before the competition and really could train well for the very choppy conditions over there. It felt good to finally be able to sail in board shorts during winter time and I really got used to the place over there. After my 5th place I really got super motivated to train hard for the rest of the year. I trained every single day I could – even coming back from Vietnam I went straight on the water with 5°C and 40 knts! And if the motivation is there the results will come! I think the best sailing I had was still in Bonaire, I was so happy to be sailing back there again and really liked the conditions, we actually scored really good wind during this event. In Lanzarote, after having a lot of heats already that year where I lost by half a point from one of them, I could finally beat one of the top 5 guys in the double. In the end I got in the top 10 every single event which, looking back, is maybe the best part of the whole season.

C7: Let´s look back on the events a bit. You give your personal points from Flop to Top from 1 -5. The more points the better. 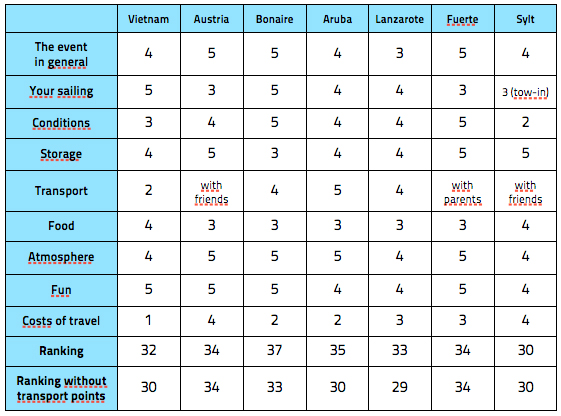 C7: Your are one of the top freestyle windsurfers in the world and your fellow-countryman Steven is PWA Freestyle Worldchampion now. Do you feel any impact in the windsurfing scene in Belgium?
Dieter: Sadly enough not really. In the windsurfing community itself almost everybody knows we have a world champion and because of this more are now following the competitions, but the attention of the media in Belgium isn’t what it has to be yet compared to other sports. But now with Steven getting worldchampion we finally got a bit of attention in the media. So for sure it has been a step forward. So let’s hope that in the future we can push our sport even better and get it also more into the Belgian media. But it´s nice to see how all the young guys at Brouwersdam are fully motivated to train hard – I guess we have shown them that dreams can come true. 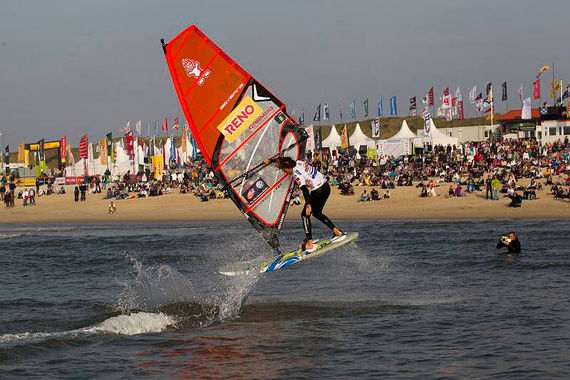 C7: Last year you got 12th, this year 8th in the overall ranking. What is coming up next? This is the first winter you can train full time and concentrate on next year! What can we expect?
Dieter: Top 5! For next year I have put my goal on this in the overall ranking. I always want to do better, but I don’t think it’s going to be easy but it’s for sure going to be possible. I also have more winter training planned than last year and I’m really motivated to get my level up! I’m not full time windsurfing yet as I’m still studying, but let’s say I rarely miss a day on the water here at home and thanks to the support of my sponsors for the first time. I will be able to do a lot of trips during wintertime so I will have more possibilities to train. This sometimes makes me have really hectic days closer to the exams at school but it is definitely all worth it! I will be training more on my jump moves like Pushloops, Airchachos and Backloops and put more concentration on the combination moves for the more flat water places and just try to get the big moves like the no-handed burners and so on.

C7: So, to be in top three, like Steven van Broeckhoven, what are you missing?
Dieter: I’m missing my jumps like the Pushloops and so on. I need to also get some more power in my sailing as the judges really like the more radical power moves these days. And probably more training, but I don’t think it is a question of only how many hours you are standing on the water. It´s more about how concentrated you are sailing, how much you are trying new things and how hard you are pushing your own level. That’s why I think in a certain point of view it’s always better to train with people, who are at the same or higher level than you so you really get motivated to do better. That’s why I think it’s hard to stay world champion as it becomes more hard to keep pushing your own level up as you have to come up with new things and new moves to keep growing. The other thing I try to do is, when I go on the water really have a list in my head before a day of sailing. I have to try this and that today and land them. Only like this your level can keep going up as it’s easy to do everyday the same moves but hard to learn new moves everyday. 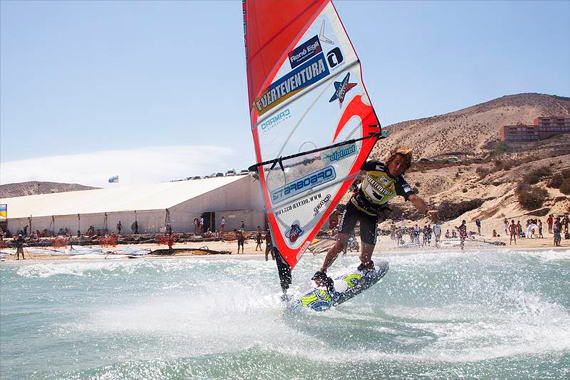 C7: There are discussions about new rules in freestyle. Can you tell us more about it and what will it improve?
Dieter: In Sylt we had a riders meeting concerning the rules of judging for next year in the Freestyle, so far I don’t know if everything is confirmed but the big change we all agreed on is to get separate scores on both Starboard-tack and Port-tack. Still keeping the 3 points we get scored on style, technical difficulty and diversity. The big benefit of this judging is people will easier see on which tack they totally went wrong and why he/she lost. Also in total we will have 60 points where we get judged on, so close decisions get more separated which makes the chance on split decisions much smaller. 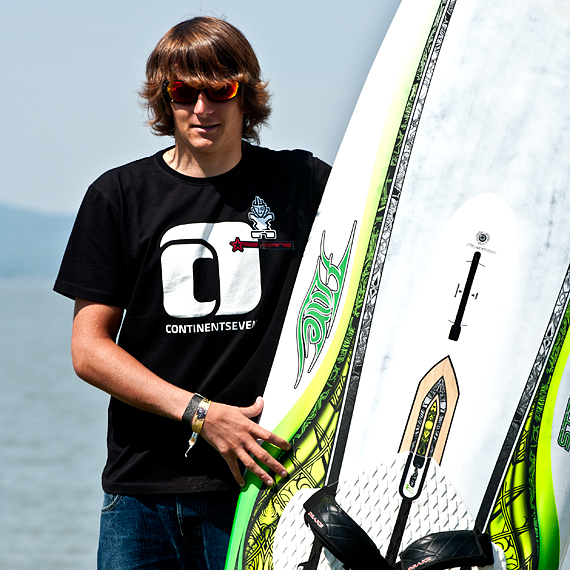 Dieter with his freestyle board

C7: What is your winterplan?
Dieter: I am now in Western Australia and after that trip I will be 2 weeks at home (catching up on school work) before I will leave for 3 weeks to Tarifa with my parents like I do every year during Christmas and New year. Unfortunately last year wasn’t a big success there, with only 2 days of windsurfing, but hopefully this year will be better again! After that I will have my exams in January and straight after the exams I will be going to Vietnam for the competition but haven’t decided yet how long I will stay there. That will depend on the PWA calendar. I am also planning a trip to Bonaire so as soon as the winds are looking good I will be heading out there for 3 weeks to train together with Kiri Thode and all the Bonaire guys! After that we usually have multiple PWA events close after each other so summer holidays will approach fast. In August it is back to exams and after that probably a trip to Dahab before the PWA in Sylt. But I guess that’s already a view on whole 2012 right?

C7: Yes, looks like you have your 2012 year already planned out. But for now, how long will you stay in Australia, with whom will you travel and which spots will you visit?
Dieter: I am traveling for 5 weeks in Australia. I will be traveling together with Laure Treboux and Timon Hagen our camera man for the trip. We are hunting for some new freestyle spots along the coast as west-Australia has beside the great wave sailing also some sick freestyle spots which so far are unknown to most of us. During the trip we will do a lot of filming to make a movie of about 30min. to show the world how great Down under can be for both waves & freestyle.

C7: Thanks for the interview and we wish you a lot of wind for the last days in Australia!!!

Could you please check the meaning of the word “Could” in English because in nearly every interview I read on this website it is in completely the wrong context! e.g “you could improve” is wrong! It should read you improved as its past tense!

Thanks for your input!
Cheers Kerstin

What? PWA will count moves on both tacks? That sucks. So now we will see riders trying they best to land burner on different tack doesn`t matter stylish or not. Man i`ve seen you can perform on both tacks and it`s good but not everybody like that and i don`t think it`s necessary.

The system will not be to make everybody do the same moves on each tack, the system is still scoring on Style, Technical skill and diversity each having 10 points to give, which now instead of a 30 points total will be 60 as you have 30 points on Port and 30 on Starboard-tack. So if you do unstylisch manouvers on one side it will still bring you’re score down and in the end will come to the same result as before only on 60 points. Which is a bigger scale and needed for the close heats we have now… Read more »