2002 was the year, when his father brought Amado to the PWA event to watch the competition at Lac Bay. ” This time I not only watched the competition, I spotted a good friend, who had a windsurfing lesson and I immediately knew, I want to be on the water, too.” His father bought him a 2,3m HotSails Maui and a Starboard Acid wave board with 62 liters and he learned the first moves. This was Amado’s start into windsurfing. 12 years later he finds himself in his first winners final of an elimination and finishes a PWA event on the podium.

Amado was probably not on the radar of many people as a guy contributing in the top level. But his good friend Dieter van der Eyken foresaw the final result of the event with Kiri Thode, Steven van Broeckhoven and Amado on the podium. Dieter about Amado: “He is one of the freestylers with the best potential, watch him!” 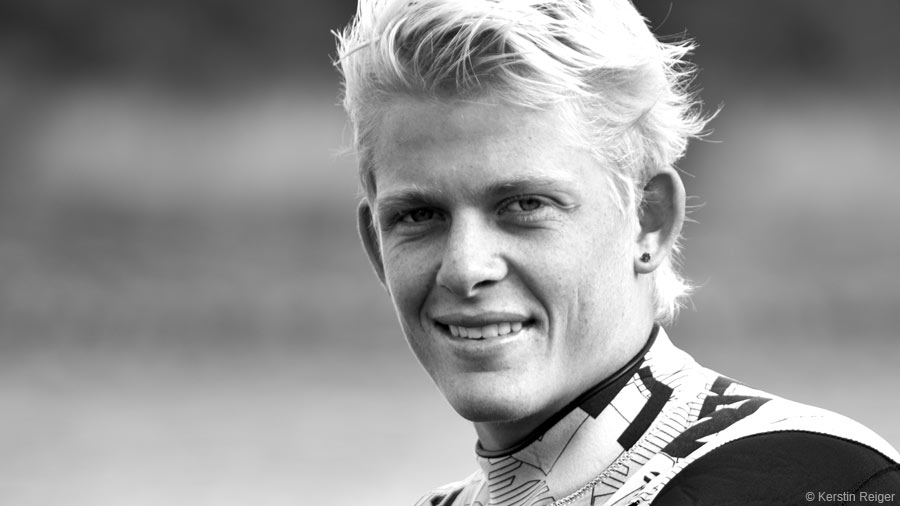 Continentseven: Did you have any expectations before the event?

Amado Vrieswijk: My goal was to end in the top 5, but seeing a lot of the pro’s training here on Sorobon in the past months I knew that the level was very high and that it was not going to be easy.

Continentseven: You made it all the way on the podium. What was your tactic for advancing over the two world champions Kiri Thode and Gollito Estredo for example?

Amado Vrieswijk: Trying hard to stay calm, focused and just doing the thing I love the most: Freestyle!! But in the heat against Kiri, my friend and in this case also my oponent it was not so easy. The adrealine went crazy, but it worked out great!! 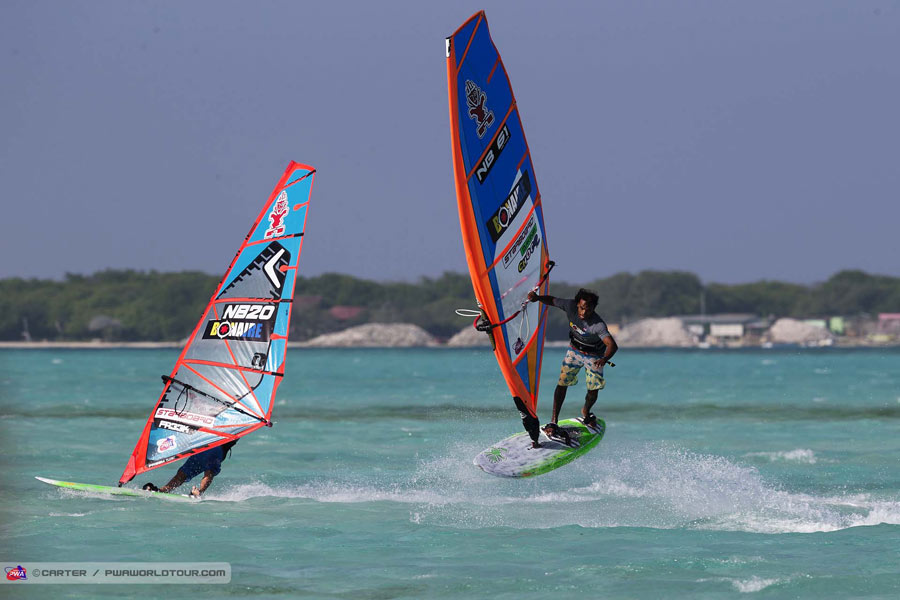 Continentseven: Compared to the some of your colleagues, some of your moves like the Air Bob or Air Kabikuchi look outstanding. How do you get this air time on flat water? What is your secret?

Amado Vrieswijk: I think the secret is to stay focused and to have as much control as possible over the move and use all your strength in the right moment.

Continentseven: Are there any moves you practice, but did not show during the competition?

Amado Vrieswijk: No, the last few weeks I was really training hard on the double moves to get them really consistent like the Kabikuchi and Double Culo both sides.

Continentseven: Kiri wins, in total 6 Bonaire locals are in the top 10, two in the top 3, you are the 2nd best placed rider from Bonaire. Is the island now going crazy and how are the reactions from the local people?

Amado Vrieswijk: Yesterday it was overwhelming. Lots of friends, family and even for me strangers came to congratulate both Kiri and me. Bonaire is very proud of its windsurfers. All the guys are top riders. Everybody is very happy about the results. It was so nice to have all my friends and family shouting at the beach. It gives me an extra push on the water to go even bigger. 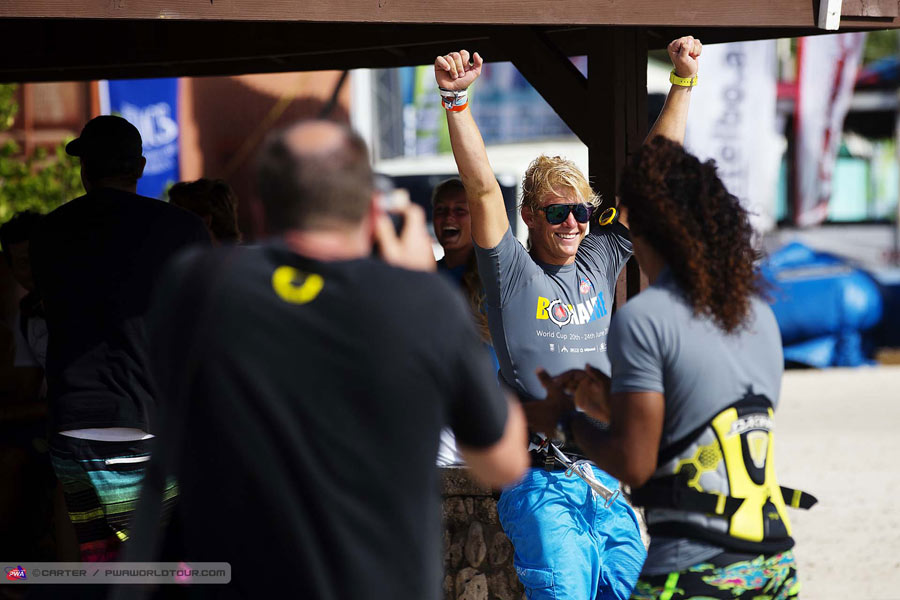 Continentseven: From the outside it looks as if there is no jealousy within the freestyle competitors from Bonaire. Is it really like that?

Amado Vrieswijk: We’re all friends, we train, travel and laugh a lot together. That’s the way it should be. This way life is much easier and one can enjoy his favourite sport much more. I see the riders from Bonaire also as family-members. Of course we all want to be number 1 but if I got kicked out by one of the Bonairian riders I really want him to keep pushing and win the event. We are really pushing and coaching each other on the water and at the same time on the beach.

Continentseven: How important is the sport of windsurfing on Bonaire? Has something changed since Kiri’s World Champion Title?

Amado Vrieswijk: The windsurfing sport is besides diving the most popular sport on Bonaire. Since last year a lot of young kids started windsurfing and that is great!! Sorobon beach is one of the best windsurfing spots in the world, good accomodations, bars and restaurants, so for tourists a perfect place to learn or just enjoy windsurfing. Bonaire is growing on the world-map, more and more people want to come to Bonaire to train with all the pro’s. And …..of course to enjoy Bonaire’s paradise-living.

Continentseven: In autumn last year, we asked you about your goals in windsurfing, you answered: a place on the PWA podium. Goal succeeded. What is coming next?

Amado Vrieswijk: Yes this years goal succeeded already, haha. Never thought is would go so quick. But after the last few days, the pressure will go up. My goal is to end overall in the top 5 this year. It’s going to be a long road I think, but I will fight. 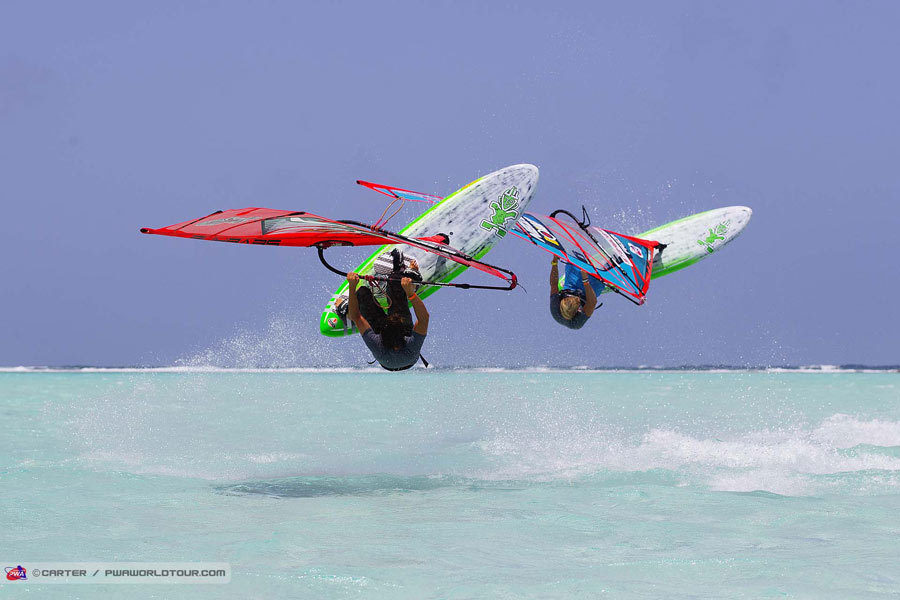 Continentseven: The next PWA event will be on the Canary Islands on Fuerteventura. How and where will you prepare for this competition?

Amado Vrieswijk: I will leave Bonaire this Sunday (29th June) for my trip to Lanzarote and will compete in the EFPT from July 9-12.  I will meet my team-mate Dieter van der Eyken over there and we will train on the Canary waters. After Lanzarote we travel to Fuerteventura to make sure we have enough time there also to get used to the wind and sea-conditions.

Continentseven: Congrats again and thanks for the interview. Do you want to add anything?

Amado Vrieswijk: Thank you very much for the interview. I want to thank my sponsors Starboard and Severne Sails, the gear is really great this year. Also I would like to thank the PWA-crew, our local organisation, especially Elvis Martinus, the Bonaire sponsors, Marcus Seidel and John Carter for taking awesome pictures. Last but not least the cheering spectators on the beach and of course my family.